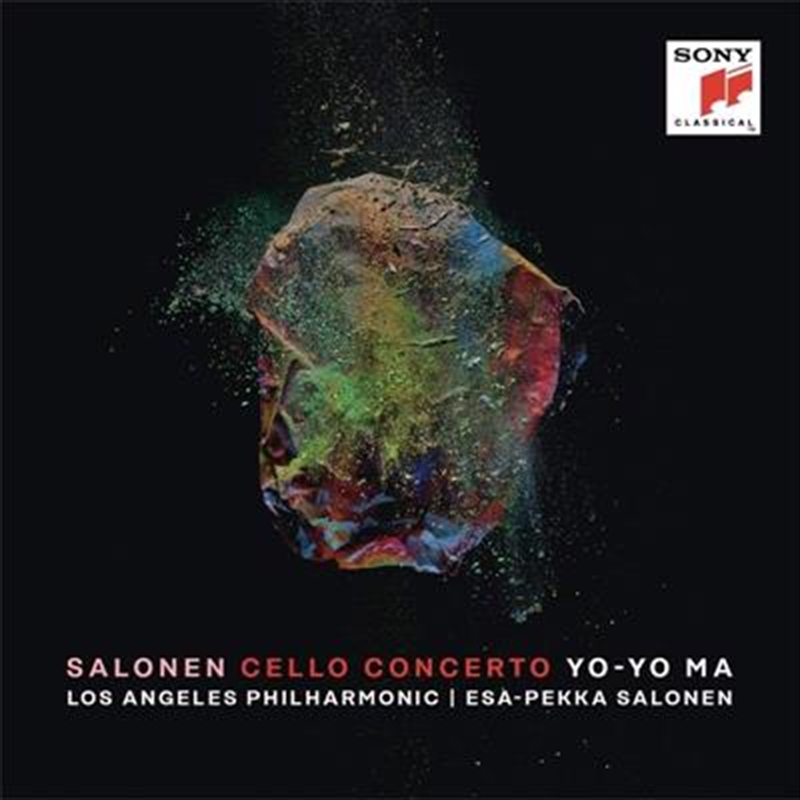 Co-commissioned for Ma by the Chicago Symphony Orchestra, the New York Philharmonic, the Barbican Centre, and Elbphilharmonie Hamburg, Salonen's cello concerto premiered on March 9, 2017 with Salonen himself conducting the Chicago Symphony Orchestra. Ma and the concerto then came to the New York Philharmonic on March 17, 2017, with then-Music Director Alan Gilbert conducting; Ma and Gilbert continued the premiere season with performances at London's Barbican Centre and Hamburg's Elbphilharmonie. This recording captures the live performance in Los Angeles on February 8, 2018.

The approximately 30-minute concerto includes scoring for electronics and begins with "a simple thought emerging out of a complex landscape. Almost like consciousness developing from clouds of dust," in Salonen's words. The second, main movement follows with "slow cello arches...looped to create harmony from single lines." This is followed by the third movement of music that is "often dance-like; sometimes gesticulating wildly, perhaps from the sheer joy of no longer having to do with clouds and processes." Salonen concludes, "Finally the kinetic energy burns itself out gently, the rapid movement slows down, and the cello line climbs slowly up to a stratospherically high B-flat, two centimetres to the left from the highest note of the piano."

Salonen has noted that some ideas for the piece "can be traced back by at least three decades, but the actual material for the piece was mostly developed in the summer of 2015 when I decided to spend a few months researching new kinds of textures without a concrete plan for how to use them." Salonen and Ma are long-time friends and collaborators, having worked together on many projects in the 27 years since Salonen first led Ma in a performance at the Los Angeles Philharmonic in 1992. Salonen says, "It has been a very great pleasure and honour to write a concerto for one of the most unique life-givers and communicators of our time, Yo-Yo Ma. It has been inspiring to know that his technique knows no limits. Perhaps more important: nor does his imagination."

The concerto has been met with critical and popular acclaim: Anthony Tommasini of The New York Times described the piece as "restive, cosmic and formidably difficult," its ending "a cello concerto equivalent to the 'Sacrificial Dance' from Stravinsky's 'The Rite of Spring.'" John Von Rhein of the Chicago Tribune noted that the concerto "plays loosely with traditional concerto form but fills that free-form structure with the kinds of things [Ma] does better than any cellist around. It is as much a showpiece for his stupendous instrumental gift as it is a study in opposing forces—think quiescent clouds of lyricism giving way to punchy hyperactivity, and back again." He added, "Those forces are finally reconciled over the course of the half-hour piece, which ends with Ma climbing to a vertiginous high B flat on the cello's A string, as if he were reaching for the stars. Cosmic imagery—racing comets and the 'stylized chaos' of the universe, to quote the composer—in fact plays a central role in Salonen's compositional thinking here, as does throwing prickly technical challenges in the cellist's way and daring him, with a good-natured wink, to surmount them. Which of course he did with amazing nonchalance."