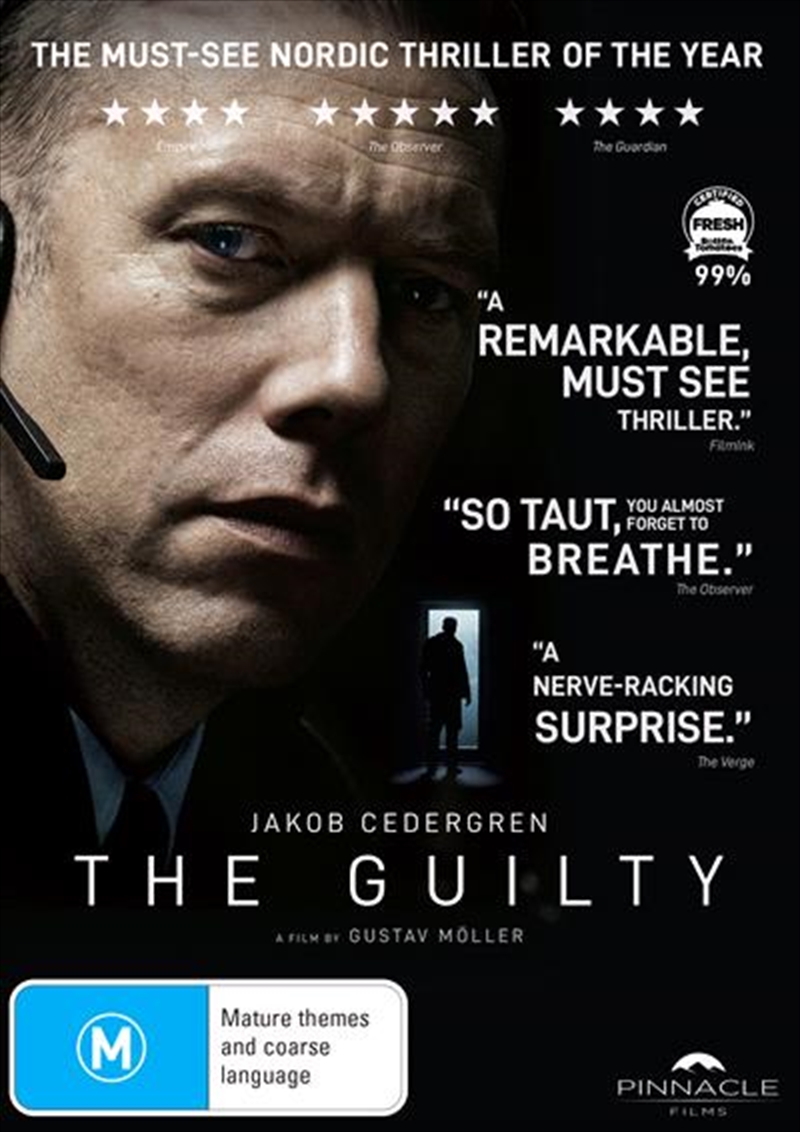 Alarm dispatcher and former police officer, Asger Holm, answers an emergency call from a kidnapped woman. When the call is suddenly disconnected, the search for the woman and her kidnapper begins. With the phone as his only tool, Asger enters a race against time to save the endangered woman. But soon he realises that he is dealing with a crime that is far bigger than he first thought.

Review of The Guilty by Eddie @ The Movie Guys

Proving once more that you need very little to create an engaging, thrilling and nail-biting feature film, Denmark made The Guilty (soon to be remade with Jake Gyllenhaal in the lead role) is a fine example of a minimalistic narrative made into something that is well worth your time.
Very much similar in tone and construction as the brilliant Tom Hardy starring Locke from 2013, The Guilty literally takes place in a singular office building of Jakob Cedergren’s recently demoted police officer Asger Holm, who towards the end of a shift answering emergency phone calls finds himself caught up in a horrific domestic violence and kidnapping case that is taking place in real time as he talks to various players over the phone.
It doesn’t sound like a particularly enthralling foundation for a feature film but thanks to Gustav Möller’s pinpoint direction and Cedergren’s commanding lead turn, The Guilty is the type of film you won’t be able to look away from as its relatively brief 80 minute runtime flies by.
Saying to much about how this seemingly clear-cut but life-altering event takes place over the brisk runtime would be a disservice to the film but rest assured if you go in blind, The Guilty will surprise you with its emotional power and narrative deviations that combat a wide range of hefty topics that will often leave your jaw on the floor as twists and turns come thick and fast.
It’s a genuinely nail-biting ride and one that’s been wonderfully bought to life by Möller and his screenwriting partner Emil Nygaard Albertsen who barely waste a single spoken word as the story unfolds, it’s the type of script that will be studied for year’s to come thanks to its sharpness and increasing high stakes movements.