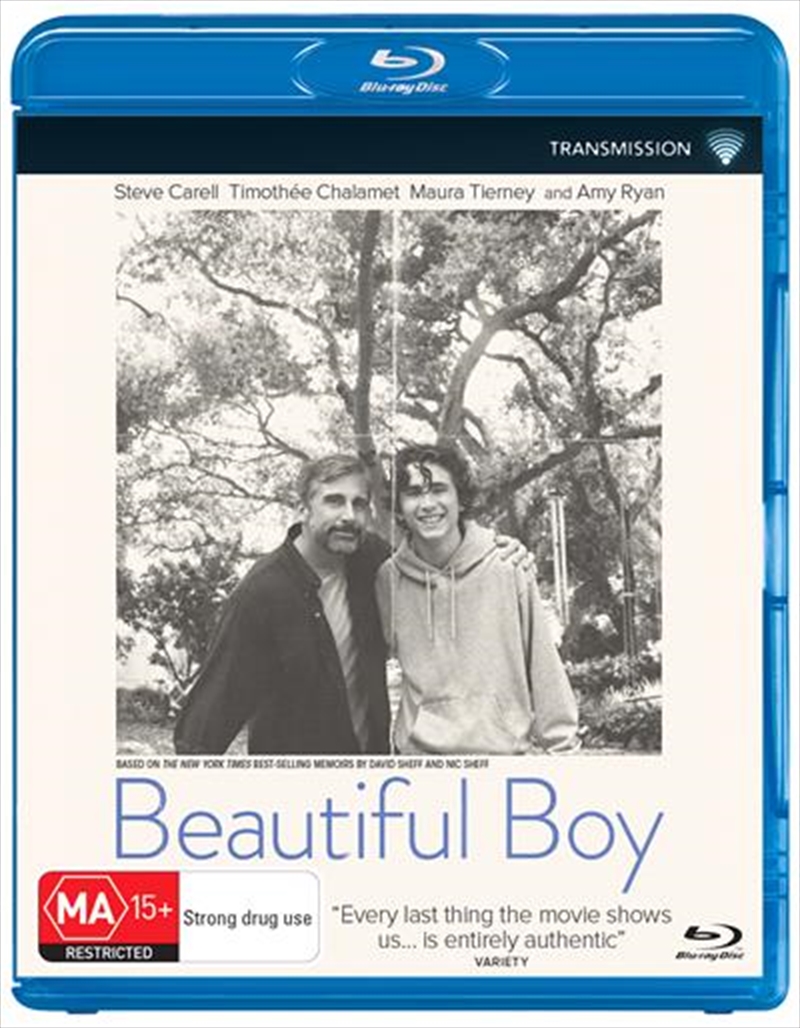 Based on the Acclaimed Memoirs of David Sheff and Nic Sheff

Beautiful Boy is a deeply moving portrait of a familys unwavering love and commitment to each other in the face of their sons addiction and his attempts at recovery. Based on two memoirs, one from acclaimed journalist David Sheff and one from his son, Nic Sheff. As Nic repeatedly relapses, the Sheffs are faced with the harsh reality that addiction is a disease that does not discriminate and can hit any family at any time.

Review of Beautiful Boy by Eddie @ The Movie Guys

Finding great dramatic success with his critically lauded 2012 feature The Broken Circle Breakdown, Belgium based director Felix van Groningen returns to the gritty genre once more with his similarly heavy hitting Beautiful Boy, based on true life stories and books by its real-life subject matters David and Nic Sheff.
An uncompromising and often raw examination of the bond between father and son and an unflinching look at drug addiction, Beautiful Boy is not the stereotypical awards baiter it seems to be as Groeningen never allows his untypically structured feature to go for the easy emotional wins, instead employing the quiet power of his two lead performers to deliver considered and powerful performances, that in any other year would’ve attracted serious awards recognition.
Desperate for an Oscar, Beautiful Boy once more sees Steve Carell forgo his comedic sensibilities to play it straight as grieving father and freelance writer David, a dedicated and loving family man who is struggling to come to terms with his once bright-spark son Nic’s drug addiction, that is setting the young adult up for a life-time of pain and regret and potentially an untimely death.
It’s arguably Carell’s best turn yet in an increasingly drama heavy career, with David offering the actor a brilliant chance to showcase his humanity and relatable persona to great affect and when teamed up with Timothée Chalamet as the up and down Nic, it allows Carell to ply his trade against a young actor that continues to impress in the early stages of his exciting career.
Nic isn’t a particularly loveable or likable character, his a privileged child that has unfortunately found himself in a hole that’s hard to escape from but thanks to Chalamet’s care and understanding in his role, Nic is still a sad and haunting figure, with his attempts to become clean and his various relapses giving the film a heart wrenching pulse that you can’t turn away from. It’s a brutally realized turn and equal to Chalamet’s impressive performance in last year’s Call Me By Your Name.
With the two leads impressing in their respective roles, Groningen to instills his film with an energy and visual vibrancy (much like he did with The Broken Circle Breakdown) that too helps bring this material to life, with the only strong letdown feeling coming from the fact that at times there was more emotion and feeling to be mined from certain situations that come and go a little too quickly with Groningen’s style of flashbacks and time changes, which at certain stages throughout the film take us out of particular moments that deserved more of the airtime.
Final Say –
Heartbreakingly played out by both Carell and Chalamet, Beautiful Boy is a unique and powerful examination of addiction and the bond between father and son and while not always an easy watch, Groningen’s film is an impressively realized true life drama.
See more from The Movie Guys on their website