Spider-Man - Into The Spider-Verse 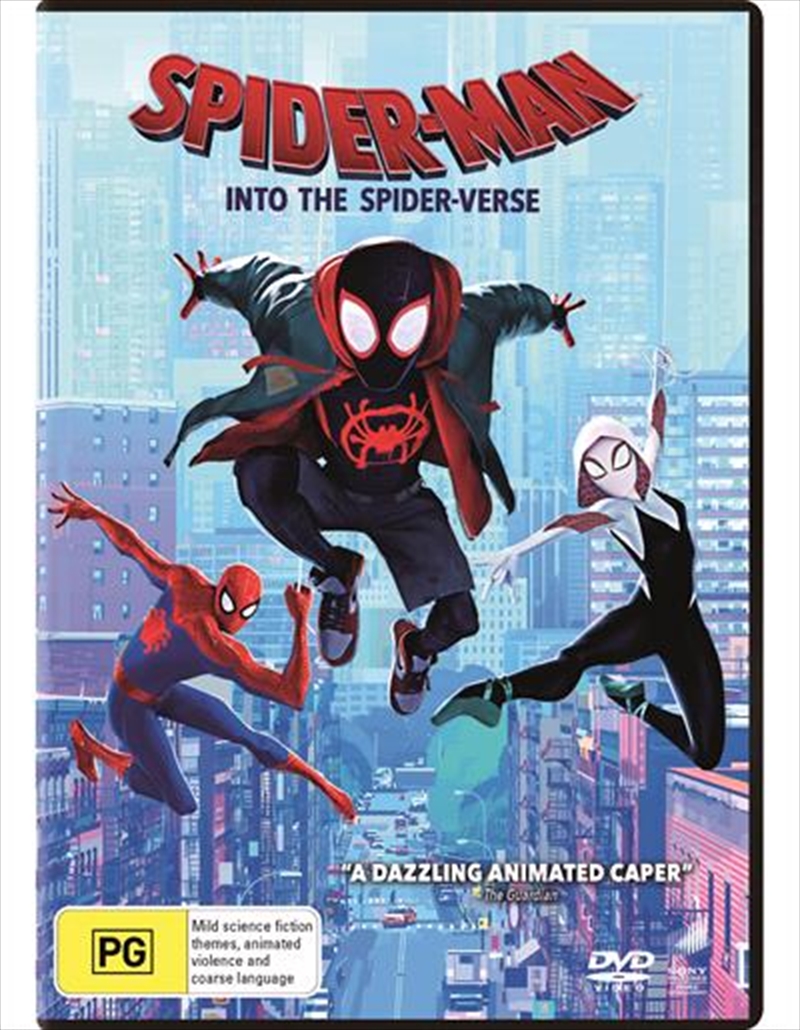 Spider-Man - Into The Spider-Verse

Spider-Man - Into The Spider-Verse DVD

Phil Lord and Christopher Miller, the creative minds behind The Lego Movie and 21 Jump Street, bring their unique talents to a fresh vision of a different Spider-Man Universe, with a groundbreaking visual style thats the first of its kind. Spider-Man: Into the Spider-Verse introduces Brooklyn teen Miles Morales, and the limitless possibilities of the Spider-Verse, where more than one can wear the mask.

Review of Spider-man: Into the Spider-Verse by Eddie @ The Movie Guys

Animated or not, Into the Spider-Verse is one of the most purely fun Spidey movies yet and one of the most entertaining comic book movies in year’s.
Appearing like a comic come to life, Spider-Verse is an assault on the senses in all the right ways, with its colorful conception, fast-paced plotting and energetic nature making it a joy to watch for young and old alike.
Overseen by 21 Jump Street and Cloudy with a Chance of Meatball filmmakers Phil Lord and Christopher Miller and directed by trio Bob Persichetti, Peter Ramsey and Rodney Rothman, full credit must go to the creative team behind Spider-Verse who have instilled this tale of teenage boy Miles Morales and a whole bunch of other Spidey’s with an overwhelming sense of playfulness and spirit, that makes it rocket along its two hour journey.
The film looks fantastic in a visual sense and is wonderfully voiced by its name brand cast that includes the likes of Hailee Steinfeld, Chris Pine, Nicolas Cage and Marershala Ali, while Shameik Moore does a great job of voicing Morales, who makes for a likable and relatable main protagonist whose trying to find his place in the world, find a way to fix a dangerous dimensional rift and a learning to deal with his newly acquired spider-senses/powers.
Having the film focus itself around Morales is a massive win for the film with it quickly differentiating itself from all the previous Spider films and while it shares a similar playfulness and energy to Homecoming, Spider-Verse feels mostly like its own beast and offering a new spin on the well worn Spider-Man origin story.
Within this story there are nice messages floating about centering around family and doing what’s right but at the end of the day the biggest win for the film is the fact its just looking to have a really good time and there’s a lot of joy for viewers getting to watch Morales story take place around the various other Spider’s that come into his version of New York, with a lot of clever writing and good visual gags making this tale a blast.
Final Say –
Whether you’re a hardcore Spider-fan or a more casual partaker of Marvel’s webslinger, Into the Spider-Verse will be a joy to behold with this animated adventure a fantastic bout of cinematic fun for young and old.
See more from The Movie Guys on their website

Title: Spider-Man - Into The Spider-Verse