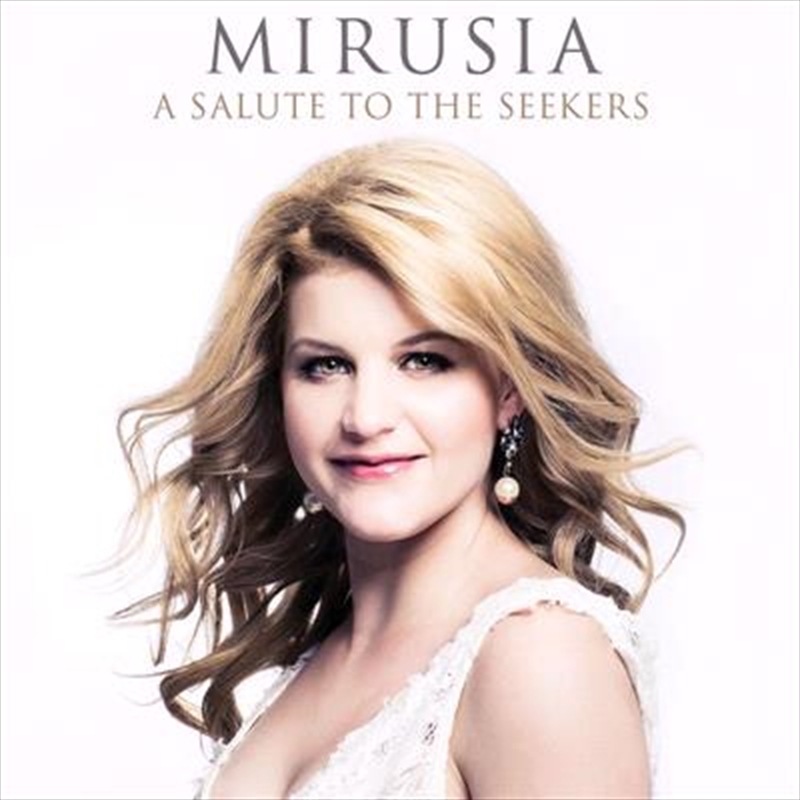 Shipping - See delivery options.
Postcode:
Quantity:
SEE MORE IN:
2 for $40 Music Mirusia The Seekers All 2 for $40

Mirusia A Salute To The Seekers CD

MIRUSIA ...one of Australia’s favourite Sopranos; Aria Award-winning classical crossover artist; Star Soprano of Andre Rieu's concerts worldwide…presents to you, A SALUTE TO THE SEEKERS.

"I still remember when I was a little girl growing up in Brisbane in the 90s and my Mum and Dad bought a CD Player. It was a big deal, a new format and a total change in the way we listened to music. I remember being obsessed with looking at the underside of the discs with all the colours of the rainbow moving on the surface like a hologram.

My Dad bought us some CDs and also a rack to display them in. But, there was one CD I always wanted to listen to and sing and dance along to: The Seekers 25 Year Reunion Celebration. I just loved everything about it. The harmonies, the audience interaction, the incredibly unique voice of Judith Durham. It was fun, beautiful, soulful, organic, classic and timeless.

Growing up in Australia the music of The Seekers was not only a part of my childhood, but I truly believe it helped to form me as an artist. At school we sang “I Am Australian”, a song that unites all of the people of Australia as one. This particular song was one I have sung many times during my career at so many different events and concerts.

In 2011, I was so lucky to have been able to tour alongside The Seekers together with André Rieu. It was an incredible experience for me to learn from them first hand and to sing together with them on stage. All four of them are so down to earth and such lovely, genuine people with hearts of gold. This album is a salute to the four people who inspired me and gave me encouragement to continue my dream of being a singer. Together with David Cameron and Pete Dacey we have put our own spin on the songs that are so well loved by The Seekers.

This recording is in no way intended to replace the original recordings of The Seekers, but it is with respect that I sing their music and share it with my own wonderful fans and friends around the world. So to Judith, Keith, Athol and Bruce, I salute you!”

Title: A Salute To The Seekers

2. COLOURS OF MY LIFE

3. WHEN THE STARS BEGIN TO FALL

7. I’LL NEVER FIND ANOTHER YOU

11. THE CARNIVAL IS OVER