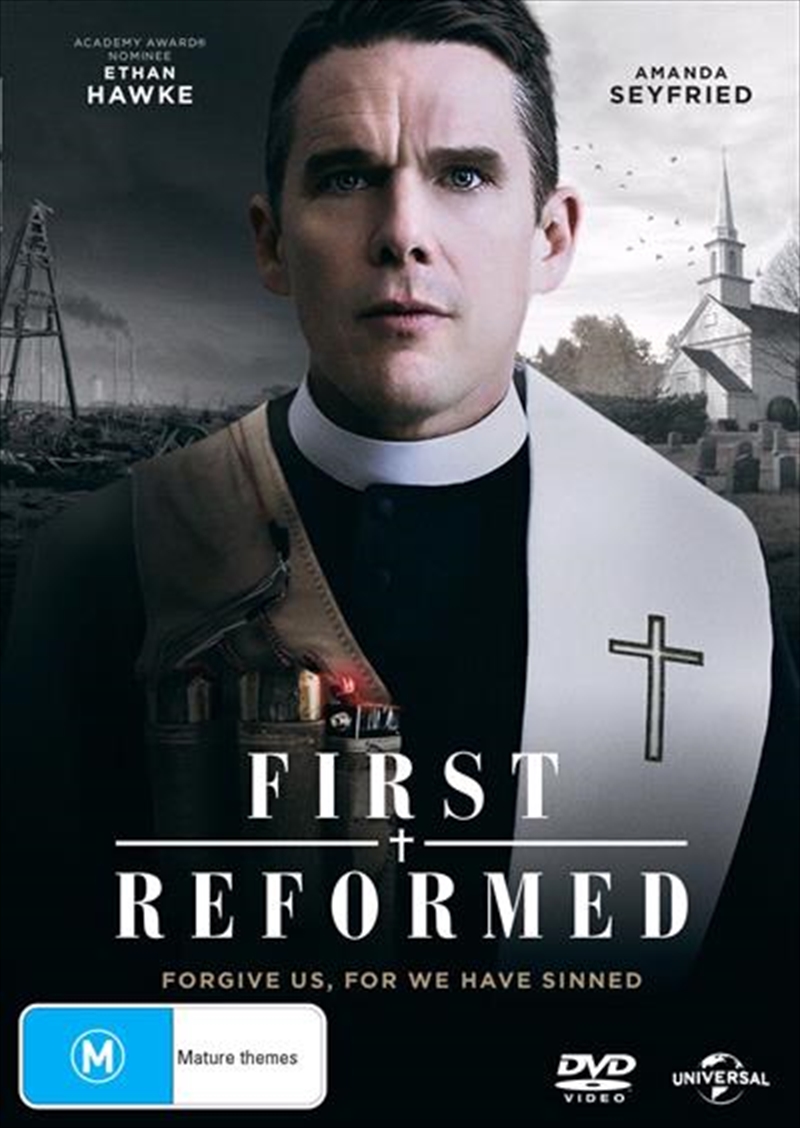 Forgive us, for we have sinned.

A priest of a small congregation in upstate New York grapples with mounting despair brought on by tragedy, worldly concerns and a tormented past.

Review of First Reformed by Eddie @ The Movie Guys

Paul Schrader will perhaps always be best known as the man that wrote Martin Scorsese’s 1976 classic Taxi Driver, and for good reason, as Taxi Driver is one of the most important cinematic events of all time and so good was that films script, Schrader would always be judged in a more higher regard.
Since the time of that 1976 release, Schrader has lived a colourful life in the industry as a writer/director that’s seen some highs (writing Raging Bull in 1980) and some extremely low lows (directing the Canyons and a double Nic Cage crazy bill in the form of Dying of the Light and Dog Eat Dog) with many wondering whether or not the veteran still had the ability to deliver on his talent, making First Reformed a genuinely nice surprise for all who may’ve doubted the aging filmmaker.
Feeling like some form of religiously themed follow-up to Schrader’s work on Taxi Driver (the two film’s would make a great double bill), Schrader finds his mojo once more in telling the story of Ethan Hawke’s reclusive and faith questioning priest Ernst Toller, who is heading on a journey not dissimilar to Travis Bickle in a world that he no longer fully understands.
It’s a quiet film and an intimate one that features Hawke in almost every scene, as the reverend deals with health issues, a drinking problem and a new friendship with Amanda Seyfried’s kindly mum to be Mary, all the while battling his faith and work life in a 250 year old congregation that has dwindled to just a few committed members, but thanks to Schrader’s writing and direction and Hawke’s award worthy turn, Frist Reformed begins to feel not unlike a horror or thriller against all the odds.
It’s not only the best Schrader’s been in year’s but Hawke also, who completely and whole-heartedly inhabits Toller as his life spirals further and further out of control.
It’s a reminder of the skill Hawke possesses as an actor when given the right material and after a few rather so-so mainstream efforts over the last few year’s it’s great to see the well-liked actor back doing what he does best, intimate and humanly realistic character studies.
While there’s a lot to like in this slow-moving affair, First Reformed does begin to enter some more far-fetched and relatively unsatisfactory end games antics as the finale draws closer, with Schrader seemingly taking the film into a direction that does an about face in the final few minutes, leaving a rather mediocre mark on a film that at times is truly great.
Final Say –
Due to its dark subject matter, First Reformed may not be for everyone but this is solid proof that Schrader still has the skill as a writer and director and features an awards worthy showcase for Hawke who’s the best his been in years as a man of faith being tested like never before.