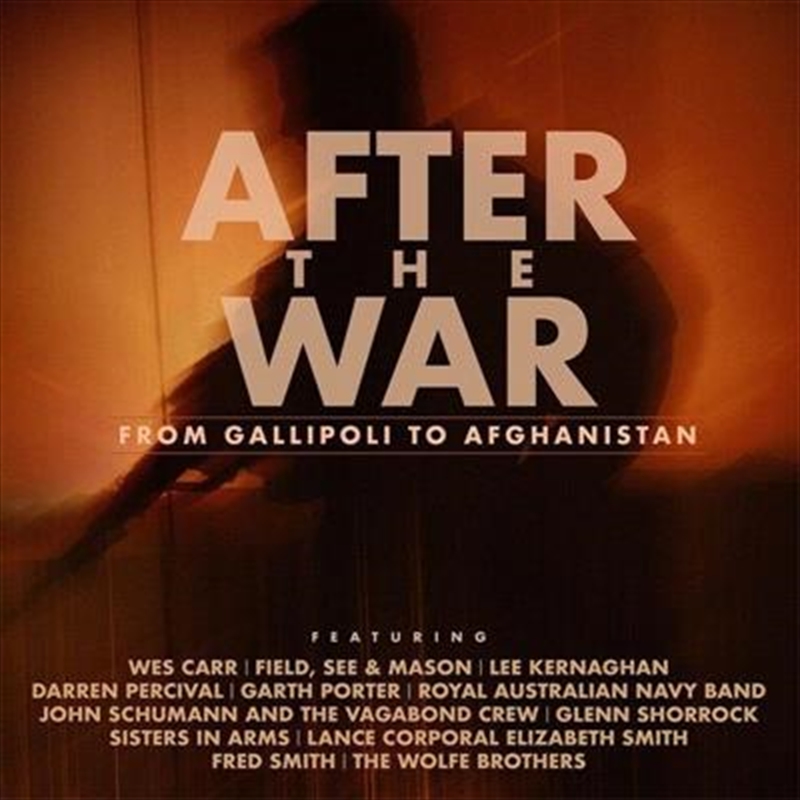 Various Artists After The War CD

After The War was initiated by Dr Brendan Nelson, Director of the Australian War Memorial, and recorded at Rancom St Studios in Sydney with Garth Porter (Producer).

This album commemorates and honours the men and women who are serving, and have served our country; and coincides with the 100 year anniversary of the signing of the Armistice on 11th November 1918, the end of The Great War. The album spans from Gallipoli and Passchendaele, to the sinking of HMAS Canberra in 1942 in the waters off Savo Island, to the Battle of Long Tan in a rubber plantation in Vietnam, and the blurred and dusty battle lines of Afghanistan.

As Dr Nelson describes it, “After the War is a stunning musical tribute to every Australian who has given their all for our nation in the uniform of Navy, Army and Airforce. From the Invictus Games Sydney 2018 single to the title track, these are songs of love, friendship, loyalty and the triumph of the human spirit in the face of tough times. This is music to inspire, make us proud and remind us of what it means to be an Australian.”

The songs have been brought to life by the contributions of talented and generous artists who have all donated their royalties to veteran services under the direction of the Australian War Memorial.

These proceeds will be fully committed to the Australian War Memorial to support initiatives, exhibitions and programmes in support of young veterans and their families Artists featured include Lee Kernaghan, Wes Carr, John Schumann, Glen Shorrock, The Wolfe Brothers, Lance Corporal Elizabeth Smith, Darren Percival, Garth Porter, The Royal Australian Navy Band, Sisters In Arms. (three women from the Airforce, the Navy and the Army), Fred Smith and members of the Polyphony Choir.

Title: After The War