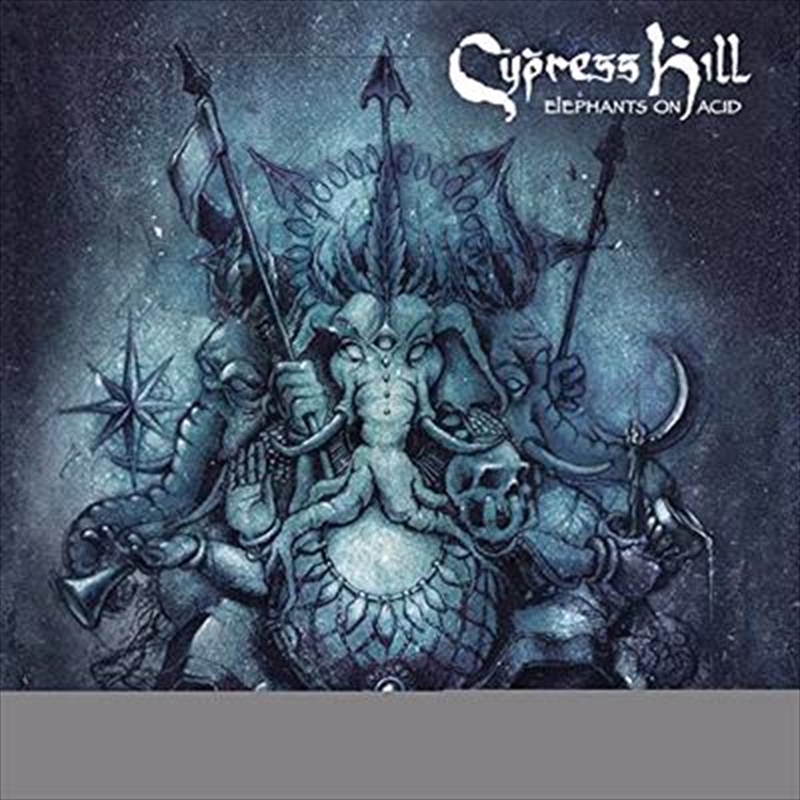 The magical man with the elephant head walked and walked and then sound and reality began to distort like a Salvador Dali painting melting in the desert. There he saw a fire spouting and hundreds of elephants appearing one after another until everything imploded and the magical elephant man came to yet another door. Welcome to Cypress Hill’s magical mystical: “ELEPHANTS ON ACID.”

With this vision in mind, hip-hop legends DJ Muggs, B-Real and Sen Dog built a soundscape that should catapult them into a different world, twenty-seven years after their debut album. ELEPHANTS ON ACID is a psychedelic trip. An album that on the one hand contains all of the band’s trademarks: The dark beats, the weird effects, B-Real’s unique high-pitched raps, and their counterpart in Sen Dog’s bass vocal. But on the other hand, ELEPHANTS ON ACID goes even further:

There are moments of Pink Floyd and The Doors, avant-garde jazz and moody trip-hop. Cypress Hill have sold almost twenty million records across their career, and their tracks have been streamed around five hundred million times. Early hits like ‘Insane In The Brain’ and ‘I Ain’t Goin’ Out Like That’ have become classics.

For their last album, RISE UP, in 2010, DJ Muggs stepped down from the producer’s chair, but now he’s back. “This album is both a return to the roots and an escape into a completely new world”, reports B-Real. Die-hard Cypress Hill fans will love the first single ‘Band Of Gypsies’, a hit featuring Egyptian singers, Indian sitars and tabla beats. ‘Oh Na Na’ is a future party classic, combining the typical Cypress Hill style with music that wouldn’t seem out of place in a Quentin Tarantino movie. Soul-singer Brevi lends her fantastic vocals to ‘Crazy’ and ‘Reefer Man’.

In the last third of the album, Cypress Hill take the listener into a haunting parallel universe, ending the album with the mysterious trip-hop track ‘Stairway To Heaven’ – it’s an amazing last chapter to an album that will bring magic and ecstasy back to the rap genre. ELEPHANTS ON ACID is a psychedelic masterpiece.

5. Jesus Was a Stoner

17. Thru the Rabbit Hole (Interlude)

20. Blood on My Hands Again