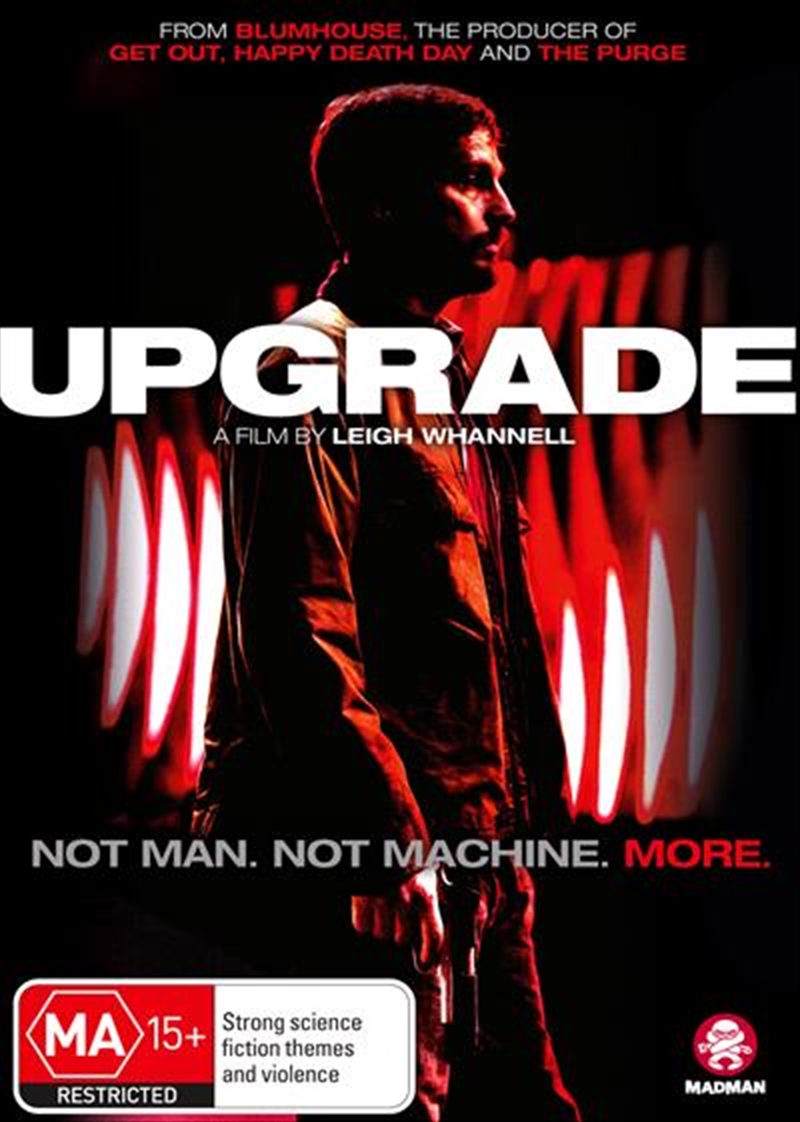 Not Man. Not Machine. More.

UPGRADE is a thrilling vision of the future from the producers of GET OUT and THE PURGE, and the creator of SAW and INSIDIOUS. After his wife is killed during a brutal mugging that also leaves him paralysed, Grey Trace (Logan Marshall Green, SPIDER-MAN: HOMECOMING, PROMETHEUS) is approached by a billionaire inventor with an experimental cure that will upgrade his body. The cure - an Artificial Intelligence implant called STEM - gives Grey physical abilities beyond anything experienced and the ability to relentlessly claim vengeance against those who murdered his wife and left him for dead.

Review of Upgrade by Eddie @ The Movie Guys

It’s not like Australian export Leigh Whannell had much left to prove in the filmmaking department after helping create two of the most successful horror franchises of the modern era in the forms of the Saw and Insidious franchises but with low-budget sci-fi actioner Upgrade, Whannell has once more showcased his growing skills as a filmmaker and created an example of what can be created with a low-end budget but lots of ideas and creativity.
Produced and financed by horror master Jason Blum of Blumhouse fame, Upgrade see’s Whannell migrate out of the horror landscape with this more 80’s infused offering, that offers up plenty of brutal and bleak action ticks whilst also delivering an in many ways believable sci-fi parable that moulds in aspects of 2001’s computer menace Hal, Ropocop’s human/robot hybrid and a futuristic world (shot in Australia) that feels cut from the same cloth as Dark City.
Upgrade’s the type of film that has almost too many ideas and components to delve into over its fairly quick-paced 90 minutes, meaning that not all of Whannell’s offerings and characters feel completely lived in (most obvious Benedict Hardie’s chief baddie Fisk and his gang of out of the ordinary “hand” guns for hire and Harrison Gilbertson’s computer genius Eron Keen) but when we are following Logan Marshall Green’s mechanic, turned quadriplegic, turned one man revenge army Grey, on his quest to unlock the identity of those responsible for the death of his wife and the cause of his wheelchair bound condition, Upgrade becomes the type of cult film in waiting that will allow Whannell’s film a long-standing reputation moving forward.
A fun, fast and most importantly likeable sci-fi action hybrid, Upgrade is a fantastically realised low-budget offering that puts most similar high-end counterparts to shame.
Another impressive feat of filmmaking from Whannell, Upgrade may at times play it a little too close to the rulebook and walk familiar plot lines but when it kicks into gear, Upgrade provides a highly entertaining ride, making it a film that is undoubtedly heading for cult status in the very near future.
See more from The Movie Guys on their website