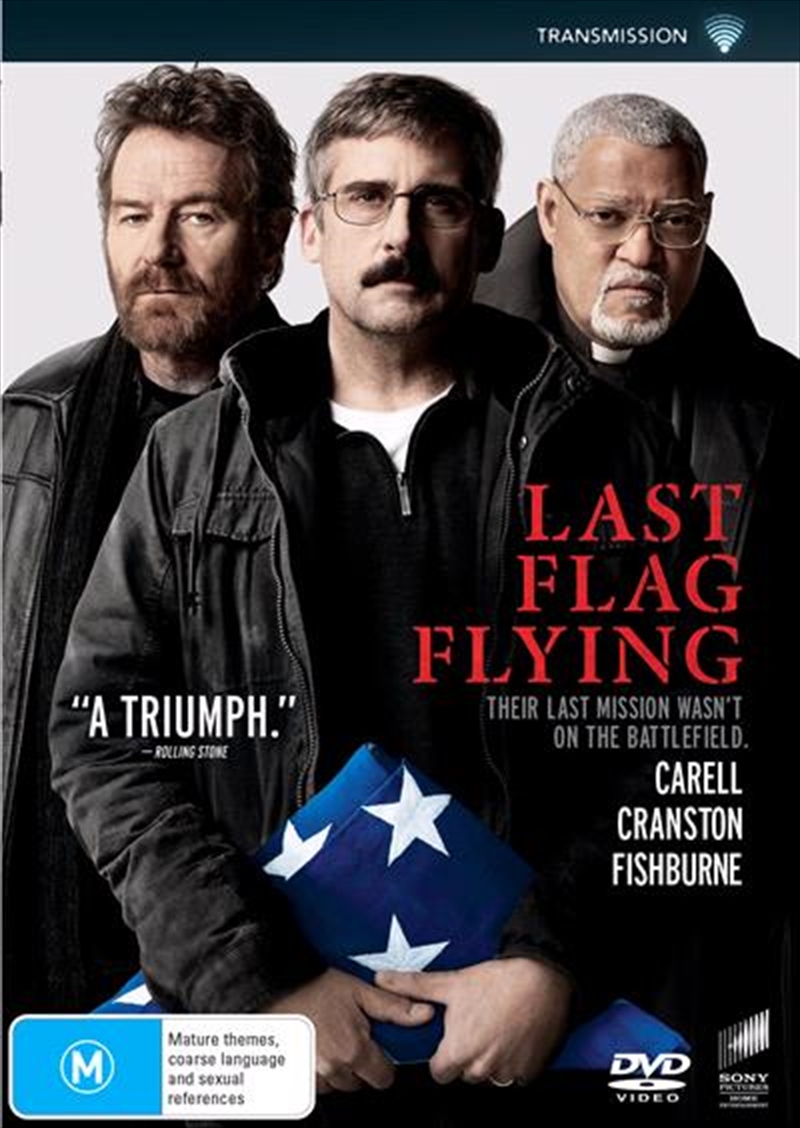 Their Last Mission Wasn't On The Battlefield

Thirty years after they served together in Vietnam, a former Navy Corpsman Larry Doc Shepherd re-unites with his old buddies, former Marines Sal Nealon and Reverend Richard Mueller, to bury his son, a young Marine killed in the Iraq War.

It should come as no surprise that Richard Linklater’s newest talk-heavy and character driven dramedy is both a further reminder of the talents of the Texas born filmmaker in his ability to extract out noteworthy turns from his performers and deliver down to earth and touching messages through his writing.
Coming from the man that gave the world Dazed and Confused, Before Sunrise/Sunset/Midnight and Waking Life (all dialogue heavy and carefully observed slice of life tales), Last Flag Flying is the type of film that may seem like its much ado about nothing but thanks to Linklater’s emotionally resonate work behind the scenes and his actors on-song turns in front of the camera, Flying becomes one of the year’s most memorable and likeable character studies, that also acts as a powerful anti-war examination.
Focussing on three Vietnam War veterans and long-estranged friends, Sal Nealon (Cranston), Larry “Doc” Shepherd (Carell) and Reverend Richard Mueller (Fishburne) as the trio reunite to support Doc as he looks to bury his only son who died on duty in the Iraq War, Flying mixes in a road-trip, family drama and expose of the after effects of war to great effect as Linklater narrows his focus onto these three aging men reminiscing about their younger year’s and pondering the big questions of life as they enter their twilight periods.
It’s a story that allows Linklater’s unique sensibilities to shine through as the film is comfortable as both an emotionally engaging and serious tale as well as one that’s perfectly at home letting its esteemed acting trio talk about their Vietnamese whorehouse escapades.
There aren’t too many filmmakers’ operating today that possess the easy to digest nature of Linklater’s offerings and it’s simply a joy to watch Carell, Cranston and Fishburne play off each other as well as devouring Linklater’s script.
All actors do an exemplary job of bringing these wounded souls to life with Carell in particular impressing in one of his most restrained roles yet, while Fishburne and Cranston have a blast bringing their larger than life figures to action in the journey that will make you laugh, ponder and cry.
Final Say –
Unfortunately overlooked by many last year, Kosinski’s well-filmed and often powerful true-life drama is an engaging experience from start to finish and with a collection of noteworthy acting turns, Only the Brave becomes the quintessential feature film based around firefighting and a lovingly crafted tribute to a very special group of men.