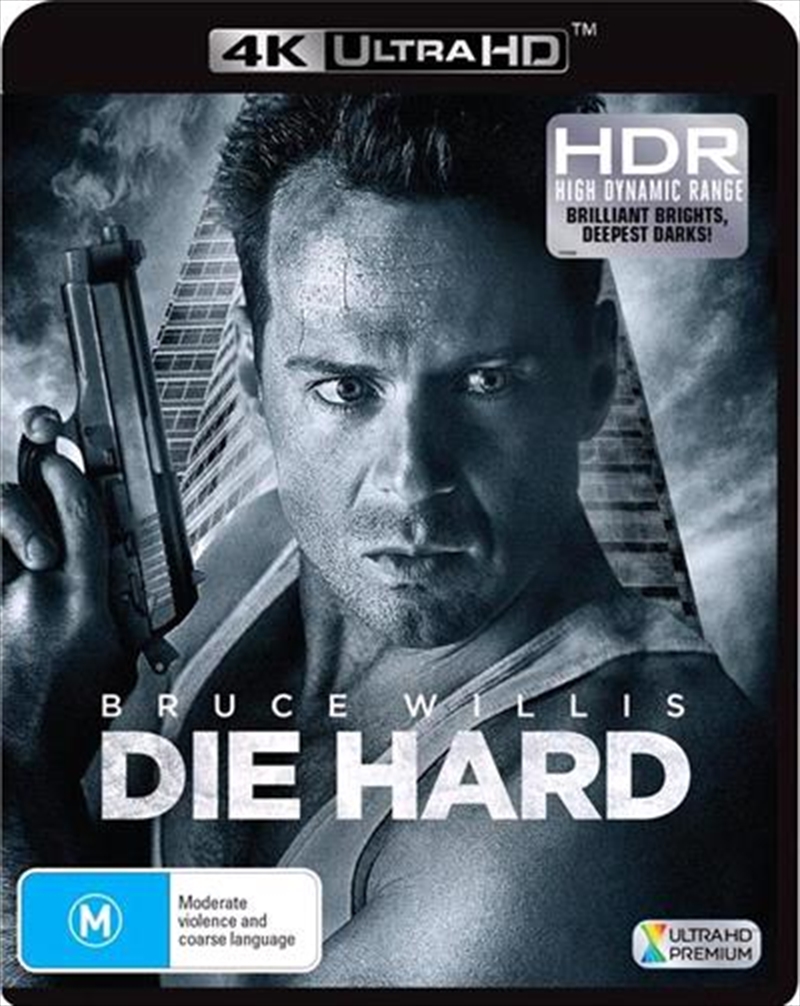 John McClane, officer of the NYPD, tries to save his wife Holly Gennaro and several others that were taken hostage by German terrorist Hans Gruber during a Christmas party at the Nakatomi Plaza in Los Angeles.

A police officer from New York City, John McClane (Bruce Willis), arrives in LA to meet up with his wife at her Christmas work function. Shortly after arriving John discovers that the building has been taken over by a group of terrorists led by a man named Hans Gruber (Alan Rickman). John McClane successfully manages to evade the group of dangerous terrorists, but he’s stuck within the building itself. Unable to leave the building and unable to make a phone call to the outside world, Police Officer John McClane must now use wits, courage and a single handgun to try and take on the terrorists and save the hostages including his wife.
I remember watching this film at a young age and questioning the whole way through whether McClane would make it or not. A few months back, I purchased this film on 4K and left it sealed, just waiting for the right time to rewatch it. Thanks to a recent discussion with my wife who admitted she hadn’t seen the film in years, I decided it was time for a rewatch and review Die Hard has many praise points to speak of, starting with the leading hero.
John McClane, as a character, is relatable and manages to connect with his audience throughout the film. Why is this so you may ask? For me, it’s the fact that John McClane is simply a regular guy. Die Hard isn’t about a man who has bulging muscles running around a building, snapping necks and gunning people down in a dirty, gory blood bath. This is a man who is trying to survive the night, showing emotion and compassion every step of the way.
And funnily enough, in 1988 when this film was released this type of action film was considered risky for the studios to make due to their leading man alone. One fact I discovered was that before Die Hard being made actor Bruce Willis had never done an action film before. Naturally casting him paid off, and this film forever changed the way we see action movies.
The performance by Alan Rickman as the film’s remorseless villain is easily one of my favourite performances from the actor. He’s a character who is not necessarily full of intentions to be needlessly harmful or violent to others, but when something doesn’t go to his plan or when people get in his way, he is quite scary. His bold tone and firm authority are some of the biggest strengths of this film.
As a plot, the film gives its audience a great setup. John McClane’s plane lands and with a little discussion with the person next to him on the plane and by chatting to the driver taking him to his destination, the film gives the audience all the details we require. This way of communicating to the audience is incredible and never feels forced. Once John McClane witnesses the building being taken over by bad guys, we have a full understanding of what the stakes are for our leading hero and the stress level for an audience member is cranked to 11. As for the film’s action, it remains a total blast. Die Hard is loaded with countless action moments and cheesy one-liners which are still quoted by many today.
Overall, if you told me you had never seen Die Hard before I will stare at you and raise my eyebrows. Die Hard is an action film that should be watched by all. Not necessarily because it’s a perfect film, but only because it’s a fun action flick which changed action films on the big screen forever. And yes, I believe Die Hard is a Christmas film.
Peter has written this movie review for Sanity. See more from Peter here