Pray For The Wicked

Panic At The Disco 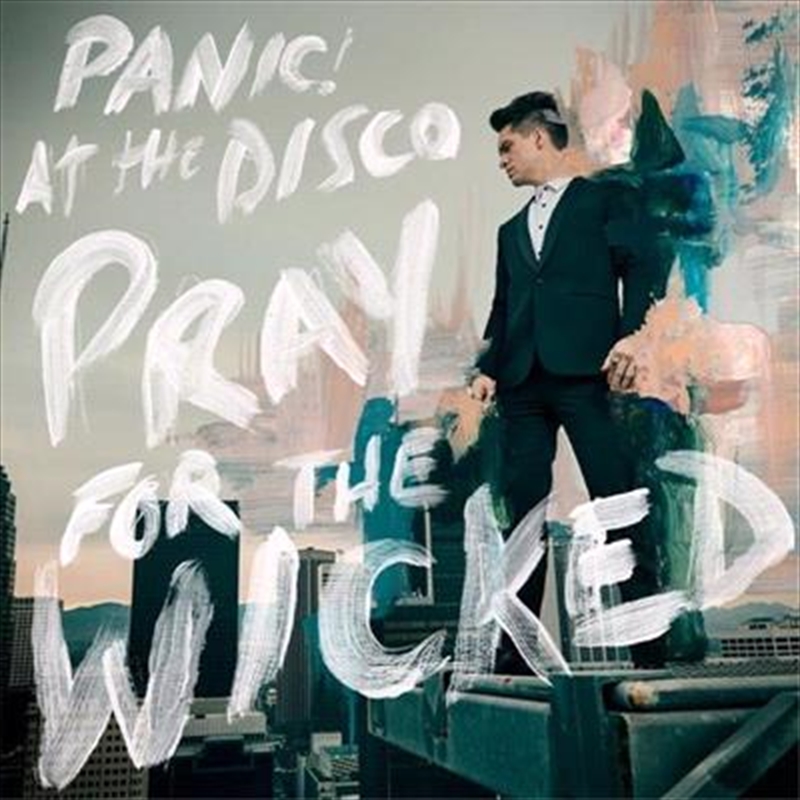 Pray For The Wicked

Panic At The Disco

Panic at the Disco

Panic At The Disco Pray For The Wicked CD

The album, produced by Jake Sinclair, is available for pre-order now with new singleSay Amen (Saturday Night) and (Fuck A) Silver Lining. “After being away in New York for months doing Kinky Boots, I just wanted to hang out at home when I got back to LA. I was so revved up that I asked some friends to come over to my home studio to help me write about all the incredible things I’ve experienced the last couple of years,” said Brendon Urie, Panic! At The Disco frontman.”Pray For The Wicked is my 'thank you' to our fans and the most fun I’ve ever had making album.”

Panic! At The Disco also unleashed an accompanying music video for Say Amen (Saturday Night) directed by longtime collaborator Daniel “Cloud” Campos and Spencer Susser. The video is part of a trilogy that acts as the prequel to This Is Gospel and Emperor’s New Clothes, also directed by Cloud. P!ATD will perform the song for the first time on “The Tonight Show Starring Jimmy Fallon” tonight US time.

Pray For The Wicked follows Panic! At The Disco’s critically acclaimed fifth album, Death Of A Bachelor, which was nominated for Best Rock Album at the 2017 GRAMMY® Awards.

Review of Panic! At The Disco - Pray For The Wicked

It’s 2006 and Panic! At The Disco have bursted onto the mainstream pop-rock scene and no one could have prepared for the impact this band would have over the next twelve years. Even with a constant changing line up there are two things that haven’t changed and that’s Brendon Urie’s vocal and lyric impact as well as the adoring fanbase they have captivated. Their sixth studio album ‘Pray For The Wicked’ hears them continuing the heavier pop directed sound their last record ‘Death Of A Bachelor’ introduced along with a slicker production full of horns, trumpets and strings. Kicking off the album with ‘(Fuck A) Silver Lining’ they launch straight into that experimental sound and will have you singing along willing to this mediocre track. Luckily it gets a little better with the try-hard anthem ‘Say Amen (Saturday Night)’ which warms you up for the feel good ‘Hey Look Ma, I Made It’ which injects pulsating synths and guitar riffs to the already established pop-rock sound. This makes the epic ‘High Hopes’ possible as it builds towards the empowering feel and production that this song embodies. It comes by no surprise that this song is quickly climbing the charts and receiving heavy radio airplay because it really is one of the best feel good tracks of the year. They continue this feeling with ‘Dancing’s Not A Crime’ which is future single worthy whilst ‘One Of The Drunks’ experiments with vocal synthesisers and gives you a cool new sound for the band which is ultimately catchy. ‘Roaring 20’s’ revisits their retro sound their last album perfected but sadly the rest of the album is a little forgettable. ‘The Overpass’, ‘Old Fashioned’ and ‘Dying In LA’ don't have the same stamina the rest of the album has whilst ‘King Of The Clouds’ has been hyped up so much that even it is a little below average. However the good outweighs the negative and what this album successfully delivers is a whole lot of energy and good vibes that will be brought to life in their upcoming live show. 12 years later and they still have the quirky spark that they enthusiastically introduced to us with ‘I Write Sins Not Tragedies’.
See more from Thomas on his website
DETAILS

Title: Pray For The Wicked

Artist: Panic At The Disco

6. Dancing’s Not A Crime

7. One Of The Drunks

9. King Of The Clouds