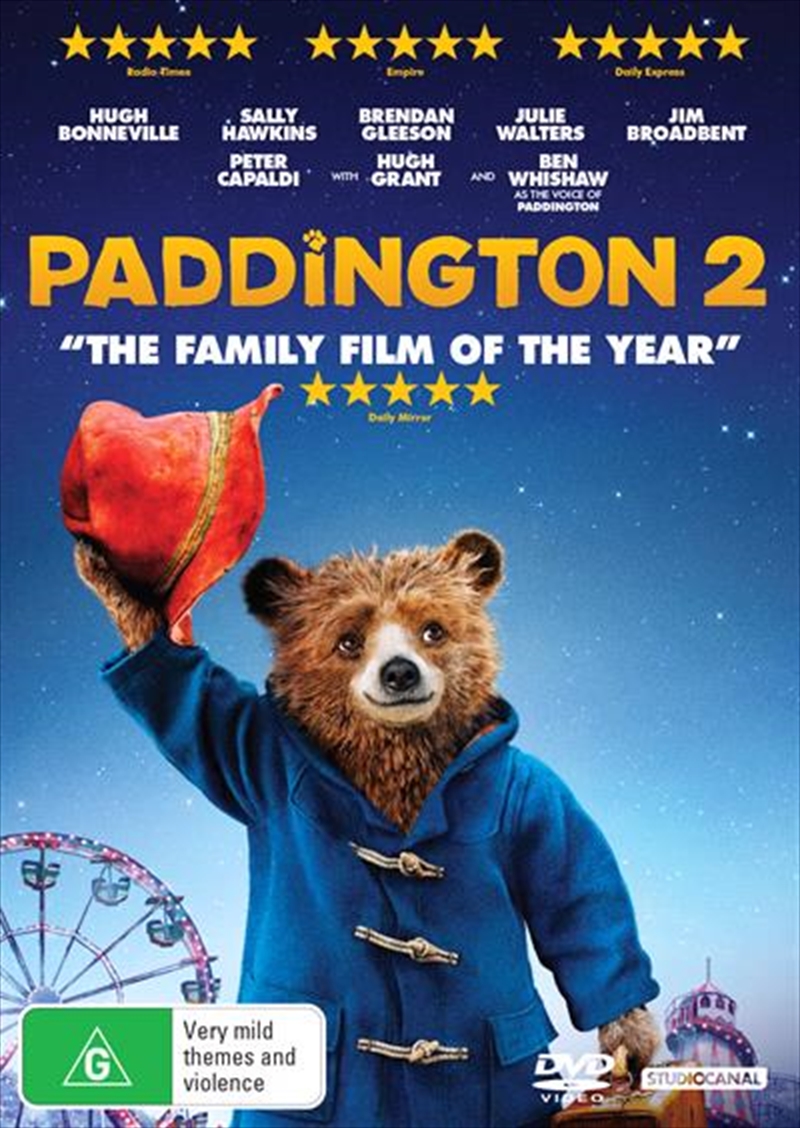 Everyone's favorite bear is back for seconds

Paddington, now happily settled with the Brown family and a popular member of the local community, picks up a series of odd jobs to buy the perfect present for his Aunt Lucy's 100th birthday, only for the gift to be stolen.

Review of Paddington 2 Movie by Eddie @ The Movie Guys

The best reviewed film of all-time; it’s quite the reputation to live up to and one that against all the odds finds itself attached to Paddington 2.
At the time of writing, Paul King’s family film sits at a 100% approval rating on review aggregate website Rotten Tomatoes from an astonishingly positive 193 critical opinions it has factored in, enough to make this sequel to the modest hit from 2014 a real piece of cinematic history of the current age.
With such endorsements it does feel like Paddington 2 has a lot to live up to but in an age where its often the case that end products don’t exactly come through from the hype laid before them, Paddington 2 is absolutely a product deserving of its glowing reputation in what’s an experience likely to remain one of the great cinematic family offerings of the modern era.
King’s film is filled with charming moments, characters and situations and is not only one of those all too rare sequels that improves upon the original but a highly imaginative and brilliantly executed feature film that is a joy to watch regardless of its genre, that may initially alienate some older viewers predetermining that this is a film skewed too young for their tastes.
There’s an effortless and endlessly engaging whimsy and good nature to King’s film, Ben Whishaw’s Paddington is again a well-voiced and brilliantly animated creation, while King’s noteworthy direction feels like a top-end Wes Anderson experience without feeling like a rip-off, which helps make Paddington 2 an instantly likeable and always engaging experience.
Adding to the delightful mix of charm, smarts and magic is the addition of Brendan Gleeson as prison cook Knuckles McGinty, while it’s a thrill to watch Hugh Grant having the time of his life in the best role his had in years as the nefarious aging actor Phoenix Buchanan who acts as Paddington 2’s key villain.
Both performers typify the effect Paddington 2 seems to bring out of not only its audience but clearly its cast and crew also, an effect of fun and smile inducing enchantment that only the most pessimistic and unfortunately grouchy viewers would fail to grasp onto.

Final Say –
There’s no two ways about it, Paddington 2 is a wondrously inventive and thoroughly enjoyable family offering that is not only one of the best all-ages films of the decade but an all-time classic feel good hit that’s a blast from start to finish.