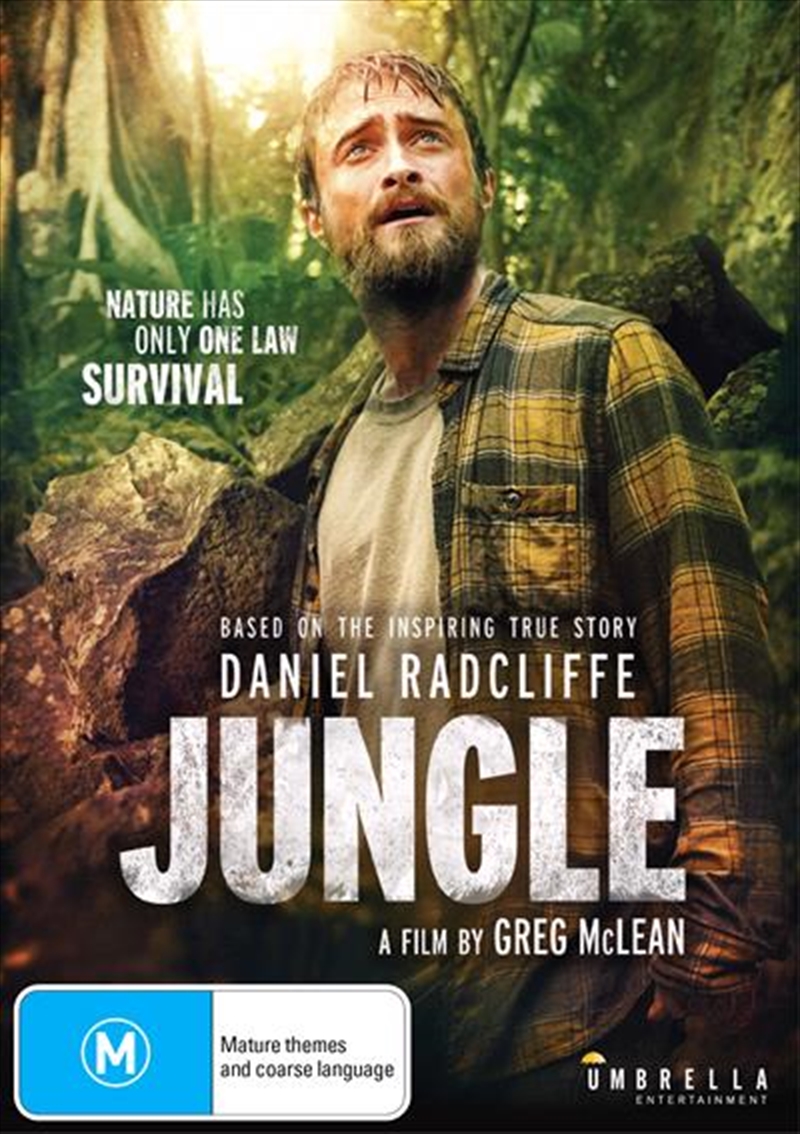 Nature Has Only One Law - Survival

Young Israeli Yossi Ghinsberg (Daniel Radcliffe, Swiss Army Man, Harry Potter ) leaves a safe future behind to chase an improbable dream in the mysterious depths of the Amazon rainforest. For a year he journeys on the path well-travelled, but when he and two new fellow adventurers, Kevin Gale (Alex Russell, Unbroken) and Marcus Stamm (Joel Jackson, Peter Allen: Not the Boy Next Door ), meet the darkly charismatic Karl Ruchprecter (Thomas Kretschmann, Avengers: Age of Ultron ), and follow him into the jungle, what begins as the realisation of a dream soon turns into a harrowing psychological test of faith and fortitude. Based on the true-life international best-selling memoir by Yossi Ghinsberg, this gut-churning tale of survival is worthy of placement next to the highly impressive likes of Into The Wild, Deliverance, Wild, 127 Hours, and Alive. In a career-best performance, Daniel Radcliffe is superb as Ghinsberg, a young man travelling the world in the early 1980s, against the better wishes of his strict parents. A survival film that marches to the delirious beat of its own hallucinogenic drum, Jungle bows inventively before the bad guy to end all bad guys: Mother Nature.

Review of Jungle by Eddie @ The Movie Guys

A change of pace for Australian filmmaker and the man responsible for Wolf Creek Greg McLean (plus an improvement on the dire Belko Experiment), Jungle sees McLean and Harry Potter himself Daniel Radcliffe recreate the incredible true life story of Israeli backpacker Yossi Ghinsberg and his survival against the odds in the wilds of Bolivia during the 1980’s.
Filmed on our fair shores in the lush confines of the Queensland forest, Jungle certainly captures the ominous beauty of being far removed from the world of civilisation and very much at the mercy of nature at its most raw and unforgiving as Yossi and his backpacking friends Kevin (Russell) and Marcus (Jackson) follow Thomas Kretschmann’s mysterious gold prospector/explorer Karl into the untamed jungle to find lost tribes and wonderment, only to find sore feet, predators and a treacherous river.
It’s a much more slowly paced and refined film from McLean whose used to thrills and blood spills (although there’s a nice cist scene here that will churn the stomach) more than character development and inwardly focussed musings on life and what it means to be alive and while McLean doesn’t fully connect us emotionally to these characters, his commitment and his casts commitment to get down and dirty to provide a realistic take on the survival tale is to be commended.
Jungle provides Radcliffe with what could arguably be his meatiest role outside of the famed Potter universe and the British performer throws himself headfirst into his role of Ghinsberg and while he struggles at times to maintain the tricky Israeli accent required of him, his psychically demanding and psychologically tormented performance is an impressive piece of acting that helps Jungle maintain a grounding of a film that’s perfectly at home within itself, without ever leaping forward to become something more.
With Jungle’s perfectly adequate proficiency on display throughout, it does feel like a slight missed opportunity for Ghinsberg’s tale to become something more profound and moving but in the hands of Mclean, there’s a fine thriller at play here that might not bring the feels but brings the chills and thrills.
Final Say –
Victim of a fanfare free release last year, Jungle is a solid if unremarkable true-life survival thriller with a fine central turn from Radcliffe and a nice (semi) return to form for director Greg McLean who shows himself to be a filmmaker capable of delivering more than just a pure horror experience.
See more from The Movie Guys on their website