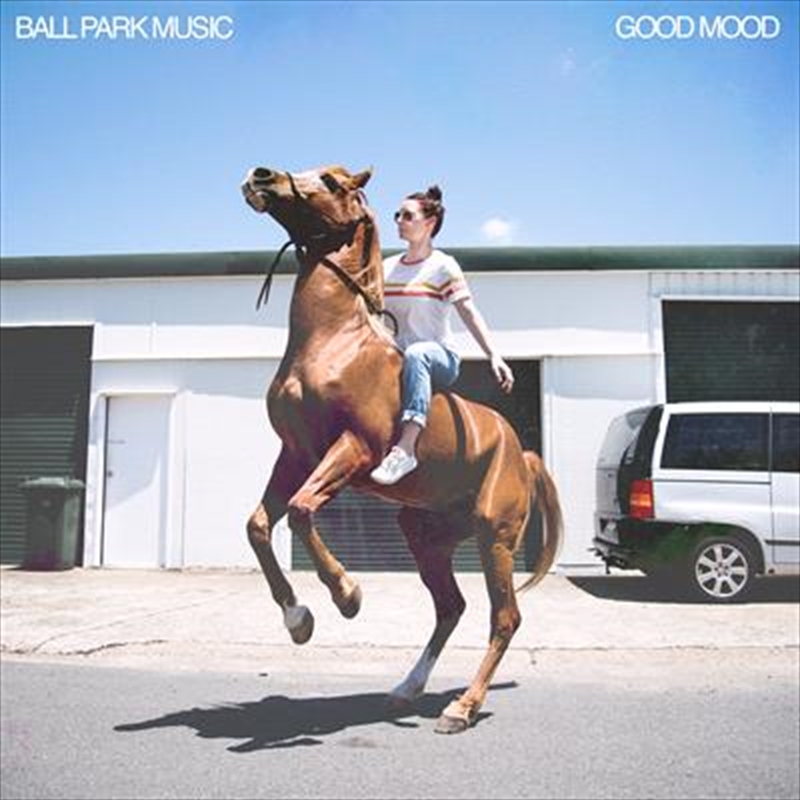 “I basically got obsessed with images of horses rearing. It’s such a powerful look. We thought it’d make for an amazing cover. We had the idea to shoot it out the front of our studio. It’s such an industrial shit-hole and we knew it would look wild. The whole concept just seemed so ridiculous. It went hand-in-hand with the album title and I knew in my heart it would be excellent if we could pull it off. We finally met our rider, Mindy. She was amazing to work with. Such a horse-whispering rebel. She came in with her horse Teddy and they absolutely nailed it. I was so proud of Dean for shooting that photograph too. The whole experience was a dream.”

The album is preceded by the ridiculously catchy and uplifting first single ‘Exactly How You Are’ - which boasts an equally delightful video.

Brisbane indie pop-rock favourites Ball Park Music are back with their fifth studio album and from the moment you listen to the first track it’s clear that they aren't messing around. “Good Mood” is one of the bands strongest and most cohesive releases yet and hears them honing their signature sound with the addition of an experimental layer. Album opener “The End Times” introduces the album with the quote “Experience great music, yes” by using different samples and I couldn't think of a more appropriate opening. The song builds its foundations with an acoustic guitar and incorporating drums, synths, keys and guitars and will have you singing along instantly. It has a very euphoric feel to the production which is similar to lead single “Exactly How You Are” and the epiphany track “The Perfect Life Does Not Exist” which actually has a more serious undertone. If you’ve followed Ball Park Music closely for the past 9 years then you would be well acquainted with their strange and quirky lyrical ideas. “I Am A Dog” is one of their strangest and whilst I may not completely understand the comparison I can’t help but love this track with its crunching guitars, Sam Cromack’s contrasting vocals and the catchy hook. But it’s the angsty “Hands Off My Body” that steals the weirdest and coolest track award. The song hears Sam singing about chopping off different parts of his body and I’m obsessed. “I didn’t like my tongue, I never did. It said nothing but anxious shit”. It hears them experimenting with a slight punk production while on “Frank” they use vocal distortion to offer a different layer. “So Nice” has a psychedelic filter over the production that brings this basic song to life. It’s very different to anything else on the record but that’s why it works so well. “Dreaming Of America” and “If It Kills You” are catchy indie-pop songs that will have you singing along instantly. But it’s the romantic album closer “I Am So In Love With You” which will steal your heart, have you feeling all euphoric and have you pressing replay on the album again. You may argue that 10 tracks is too short but really it’s actually the perfect length because all the songs are impactful, catchy and will leave you wanting more instead of becoming predictable and skip worthy. And I must say, every single song is a TUNE.
See more from Thomas on his website
DETAILS

4. The Perfect Life Does Not Exist

5. Exactly How You Are

6. Hands Off My Body