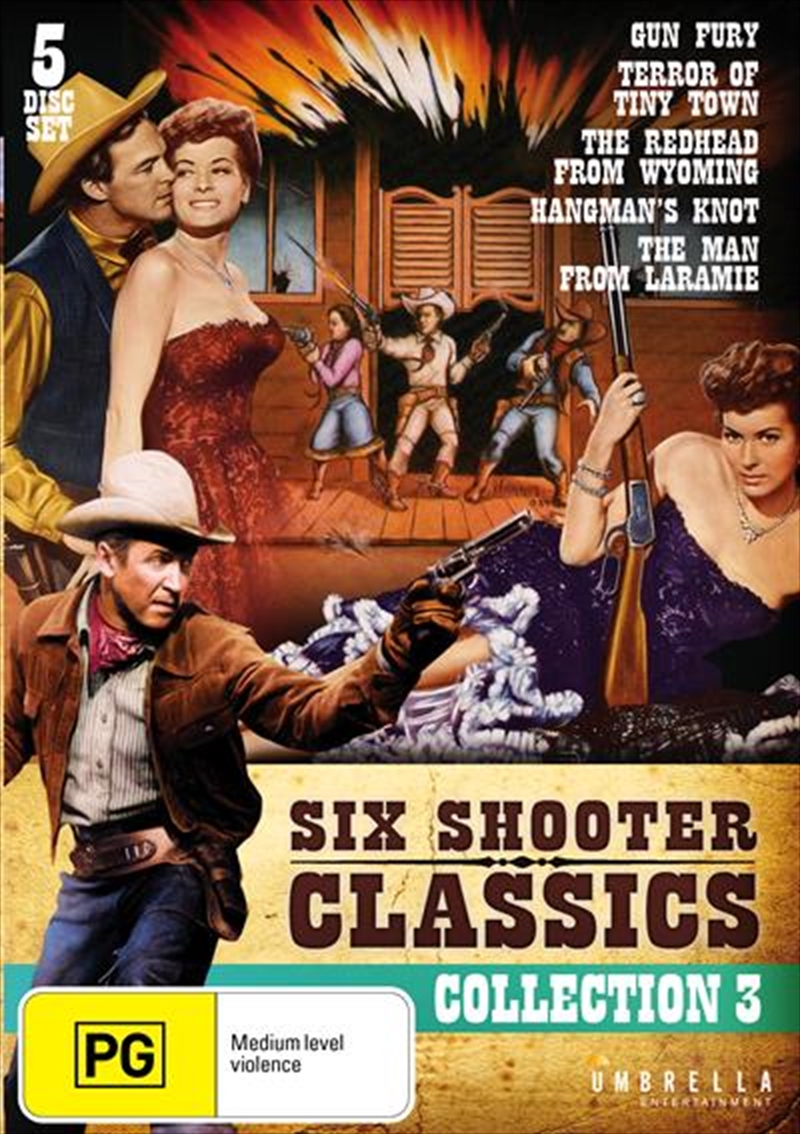 DESCRIPTION
GUN FURY - Gun Fury is a rough-and-tumbleweed tale of a psychotic gunman and the hero determined to stop him. Civil War veteran, Ben Warren (Rock Hudson), no longer has the stomach for bloodshed. Eager to give peaceful means a try, he aims to build a new life out west with his fiancee (Donna Reed, fresh from her Oscar(R)-winning performance for Best Actress in From Here To Eternity, 1953). But his non-violence is put to the test when an outlaw ex-Confederate (Phil Carey) and his gang (including, Lee Marvin) kidnap his wife-to-be.The film was originally shot in 3D, so many scenes were designed to enhance the illusion of depth. Director Raoul Walsh sends fists, rocks, hoofs and a rattlesnake plunging toward the viewer, adding excitement to this compellingly watchable, hard-hitting Western morality tale about a man who can only be pushed so far.
TERROR OF TINY TOWN - An all little person cast sings and hoof their way through The Terror of Tiny Town, the cult western tale of an Innocent Girl (Yvonne Moray) saved from The Villian In Black (Little Billy) by The Hero in White (Billy Curtis). Comic relief is provided by the Foreign Cook (Charles Becky), whose kitchen cooks up continual culinary calamity while Tiny Town's saloon singer (Nita Krebs) is a miniature Judy Garland who delivers indelible interpretations of Lew Porter's soul searching songs.
THE REDHEAD FROM WYOMING - In this action-packed 1870s western, Maureen O'Hara sparkles as Kate Maxwell, a saloon proprietress caught between her feelings for suave promoter Jim Averell (William Bishop) and the town's appealing, but less flamboyant, sheriff (Alex Nicol). Unknown to Kate, Jim, who has set her up to buy and sell mavericks, is using her saloon as a clearinghouse for rustled beef. There's plenty more about Jim that Kate doesn't know, and by the time she learns the truth, both she and the town are in grave danger. With villainy stalking them at every turn, Kate and the sheriff must battle overwhelming odds to set things right - if they can!
HANGMAN'S KNOT - At the end of the Civil War, a small band of Confederate soldiers ambush a Union gold shipment. To their horror, they learn from a dying soldier that the war between the North and the South has been over for a month, Noe facing certain criminal prosecution for acts committed while they thought the war was on, the troop seeks refuge in a stagecoach waystation. A feisty ex-Union army nurse (Reed) and three others are held captive while the men plot their next move. The troops' leader (Scott) wants to return the gold in exchange for amnesty, but the blood-thirsty bounty hunters are closing in, having every intention of taking the loot and hanging the soldiers.
THE MAN FROM LARAMIE - Will Lockhart (James Stewart) comes to the ranch town of Coronado looking for the man who is selling rifles to the Apaches, because his brother was killed with one. There he runs into Alec Waggoman (Donald Crisp), an aging rancher with a violent son named Dave (Alex Nicol). A conflict between Dave and Vic (Arthur Kennedy), Waggoman's top aid, helps Lockhart uncover the source of the rifles and also gets him involved in the power struggles at the Waggoman ranch.
DETAILS