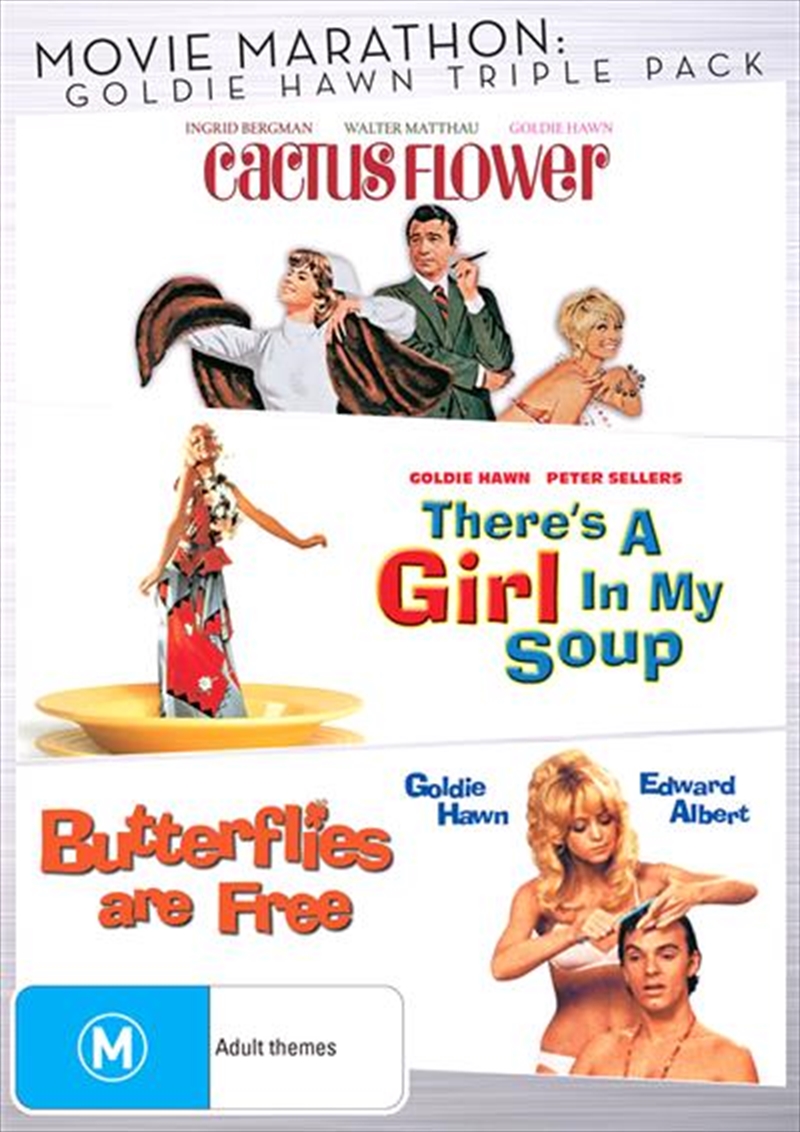 DESCRIPTION
Cactus Flower: Cactus Flower is a delightful comedy sparked by crazy, mixed-up situations and a kooky, Academy Award - winning debut performance from Goldie Hawn (Best Actress in a Supporting Role, 1970). Academy Award winner Walter Matthau also stars as Julian Winston, an easygoing bachelor dentist whose delicately balanced scheme crumbles under some unexpected circumstances. Winston is stringing along his dizzy blonde mistress, Toni (Hawn), by telling her that he has a wife and children. But when he learns that she has tried to commit suicide over him, he promises to marry her. Toni, refusing to be a home wrecker, insists on first meeting Winston's wife, so he convinces Stephanie (Three time Academy winner Ingrid Bergman) - his starched and no-nonsense nurse - to pose as his wife. Winston's scheme leads to unforeseen twists and surprises for everyone.
There's A Girl In My Soup: Robert Danvers (Peter Sellers) is an egotistical television host who seduces woman at every opportunity. When he meets Marion (Goldie Hawn), an American who has just married a British rock performer named Jimmy (Nicky Henson), he tries to charm her. Although Marion is not impressed by Robert's alluring act, she does agree to go on a trip with him to see the wine country in France. When they return, Robert has fallen in love with Marion, but she still has feelings for Jimmy.
Butterflies Are Free: In early 1970s San Francisco, blind aspiring singer-songwriter Don Baker (Edward Albert) is living away from his overprotective mother (Eileen Heckart) for the first time. Free-spirited actress Jill Tanner (Goldie Hawn) moves into the apartment next door, and they bond over music and literature, but when Don's mother makes an unexpected visit, she clashes with the headstrong Jill, assuming that she'll get bored and leave Don, just as his last girlfriend did.
DETAILS