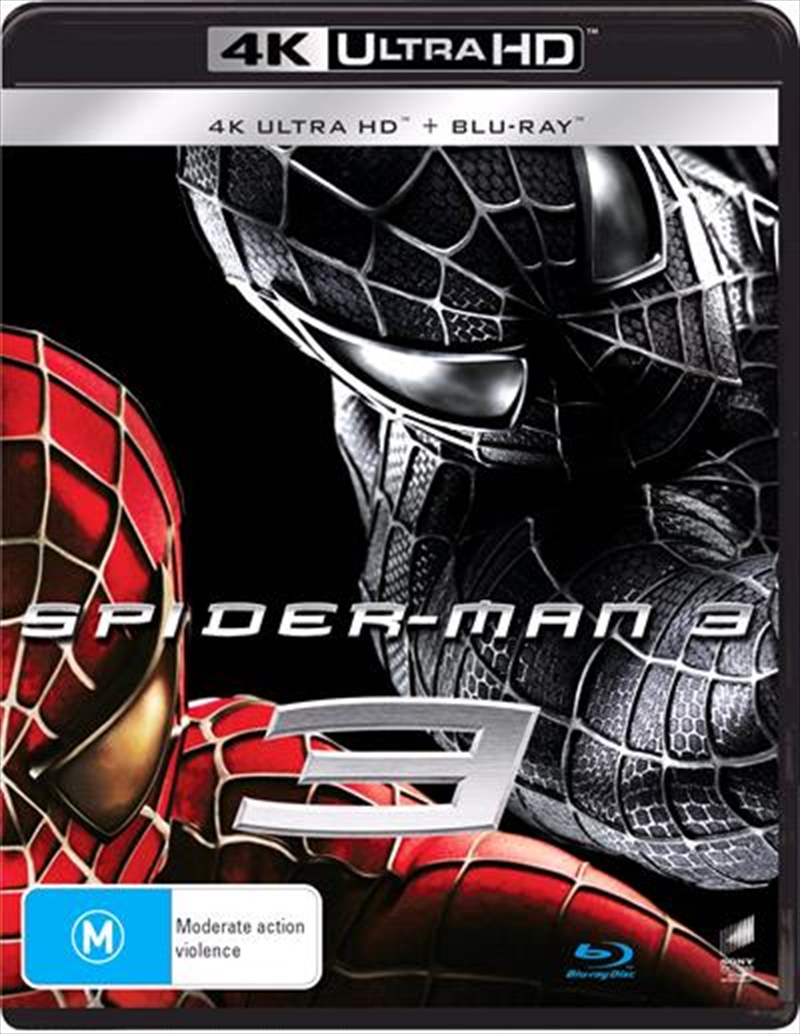 The greatest battle lies... within.

Peter Parker has finally managed to strike a balance between his devotion to MJ and his duties as a superhero. When his suit suddenly changes, turning jet black and enhancing his powers, it transforms Peter as well, bringing out the dark, vengeful side of his personality that he is struggling to control. Under the influence of the suit, Peter becomes over-confident and starts to neglect the people who care about him most. Peter must overcome his personal demons as two of the most feared villains yet, Sandman and Venom, gather power and a thirst for retribution to threaten Peter and everyone he loves.

Review of Spider-Man 2 by Christopher Pattison

‘Spider-Man 3’ is the weakest film in the trilogy, but that does not mean it is bad. The first two films in the Raimi trilogy are two of the best superhero films ever made, so stating that the third film is not the best in the trilogy is far from an insult. ‘Spider-Man 3’ was dealing with a lot of characters and really trying to set-up the cinematic universe for Spider-Man. The film is trying to juggle setting up sequels and a larger universe whilst also trying to be its own story.
Spider-Man 3 shows Peter finally has what he has always wanted, a balanced life. He's got the girl, he can still be Spider-Man and he has a stable income (for the most part) - so what could possibly go wrong? Well his best friend is trying to kill him as he thinks that Peter killed his father, there’s a new super-villain who has broken out of prison that is wreaking havoc in New York City oh and there is an alien symbiotic that has attached itself to Peter. Like I said, there are a lot of plot threads in this film, but I think director Sam Raimi and the writers do a great job ensuring that all elements receive a payoff. Sandman/Flint Marko played by Thomas Hayden-Church, is a great villain. He has a tragic backstory and really he is just trying to do right by his terminally ill daughter who he cannot provide for. You really feel for his character and can sympathise where he is coming from. Eddie Brock/Venom gets a brief cinematic outing here as well as a third act villain for Peter to battle. Visually Venom looks awesome with the trademark the wide-mouth and the big eyes. It’s a great design and I think Topher Grace does a great job with the character. I think the most compelling storyline in the film is between Harry and Peter. This tension has being brewing now for three films and it finally comes to a head in the third film. It is really well done and the back and forth between the two is great, there is a great fight sequence between the two in Harry’s apartment where Harry cops a bomb right to the face and it is brutal to think that these characters are at odds with one another. Kirsten Dunst gets a lot more to do in this film, with her character feeling quite well-rounded and more fleshed out then ever before. Peter is quite ignorant towards Mary-Jane in this film and you can really feel the tension between both characters. The characters in the film feel fleshed out with a lot of identifiable traits and qualities and I really like the way Raimi showcases the drama between all of these characters, they all have well realised arcs. ‘Spider-Man 3’ is a fun third instalment, with great visuals, in particular the birth of Sandman which is accompanied by Danny Elfmans' amazing score, great character drama and fun action set pieces that rank among the best in the trilogy. I really enjoy this film and watch it quite regularly and think it is a must watch for all comic book fans and especially Spider-Man fanatics. I am giving 'Spider-Man 3' a 7.5/10. Definitely pick this one up on 4K UHD, it looks absolutely stunning!