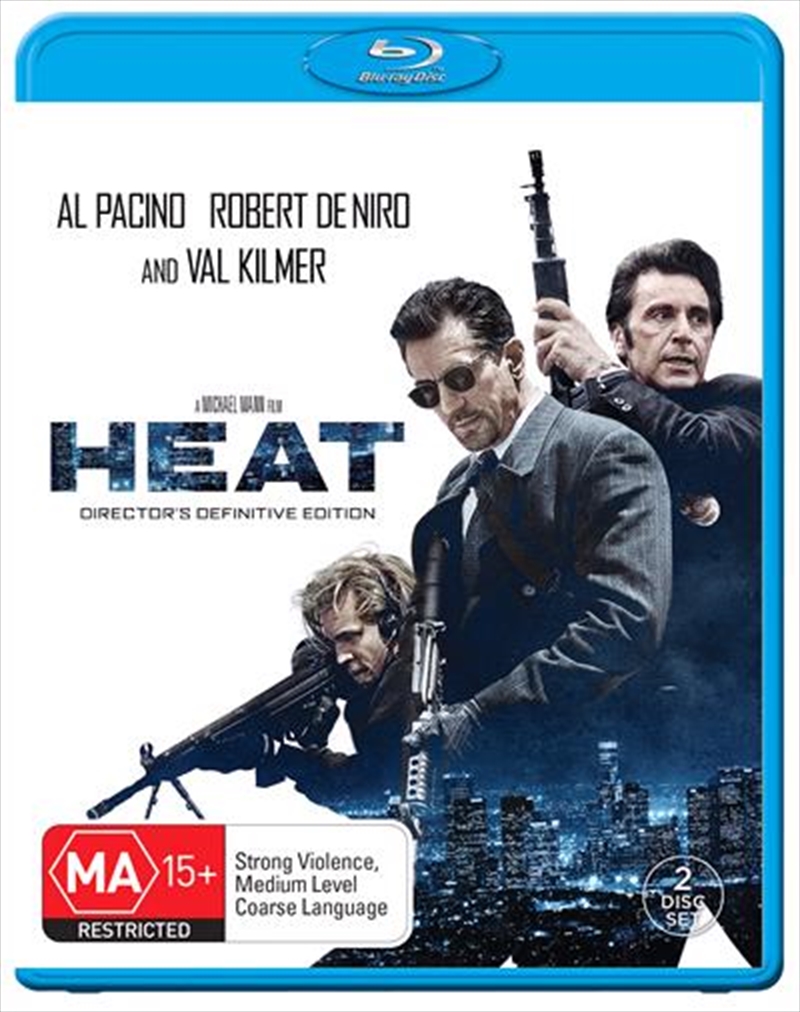 A group of professional bank robbers start to feel the heat from police when they unknowingly leave a clue at their latest heist. When Al Pacino and Robert De Niro square off, Heat sizzles. Written and directed by Michael Mann, Heat includes dazzling set pieces and a bank heist that USA Today calls 'the greatest action scene of recent times.' It also offers 'the most impressive collection of actors in one movie this year' (Newsweek). Val Kilmer, Jon Voight, Tom Sizemore and Ashley Judd are among the memorable supporting players in this tale of a brilliant L.A. cop (Pacino) following the trail from a deadly armed robbery to a crew headed by an equally brilliant master thief (De Niro). Heat goes way beyond the expectations of the cops-and-criminals genre - and into the realm of movie masterpiece.

Review of Heat by Peter Walkden

Heat follows two different people and their 'crew'. Firstly, we have a small team of professional bank robbers who enjoy targeting several banks within L.A. Leading the team is Neil (Robert De Niro). Unfortunately for Neil, during the team's recent heist one person in his crew makes a big mistake which brings the interest of the L.A. law enforcement. The film then introduces us to LT Vincent (Al Pacino) who lives with his girlfriend and her daughter. Vincent is called to the crime scene of a robbery. This robbery and crime scene begin to give direction to Vincent and his team and begins to reveal who the bank robbers are.
Now it is Vincent vs Neil. These two men are both smart and brilliant at all they do. Neil is determined to put down anyone who gets in his way, and Vincent is determined to put Neil in jail.
The performances by both Al Pacino and Robert De Niro are impressive. Considering they rarely share the screen, I found myself invested in both characters equally. One major scene the two characters do share is at a coffee shop. This scene is one of my top all-time favourite scenes in cinema history, and it is a scene I would happily watch on repeat.
Supporting performances from actors including Val Kilmer, Danny Trejo, Tom Sizemore, Ashley Judd and even a young Natalie Portman are also positive. The action is unforgettable! The film contains shootouts which still feel raw. Cinematography is also great. Director Michael Mann has captured some fantastic shots in this film.
Overall, Heat is a wonderfully made film with unforgettable performances from Al Pacino and Robert De Niro. I love incredible story and the journey they go on. They differ, but they are so like each other. Action scenes and shootouts still hold up wonderfully, and the film feels raw and suspenseful. If you have never seen Heat, it naturally comes highly recommended as it is merely one of my top-rated films.
Peter has written this movie review for Sanity. See more from Peter here