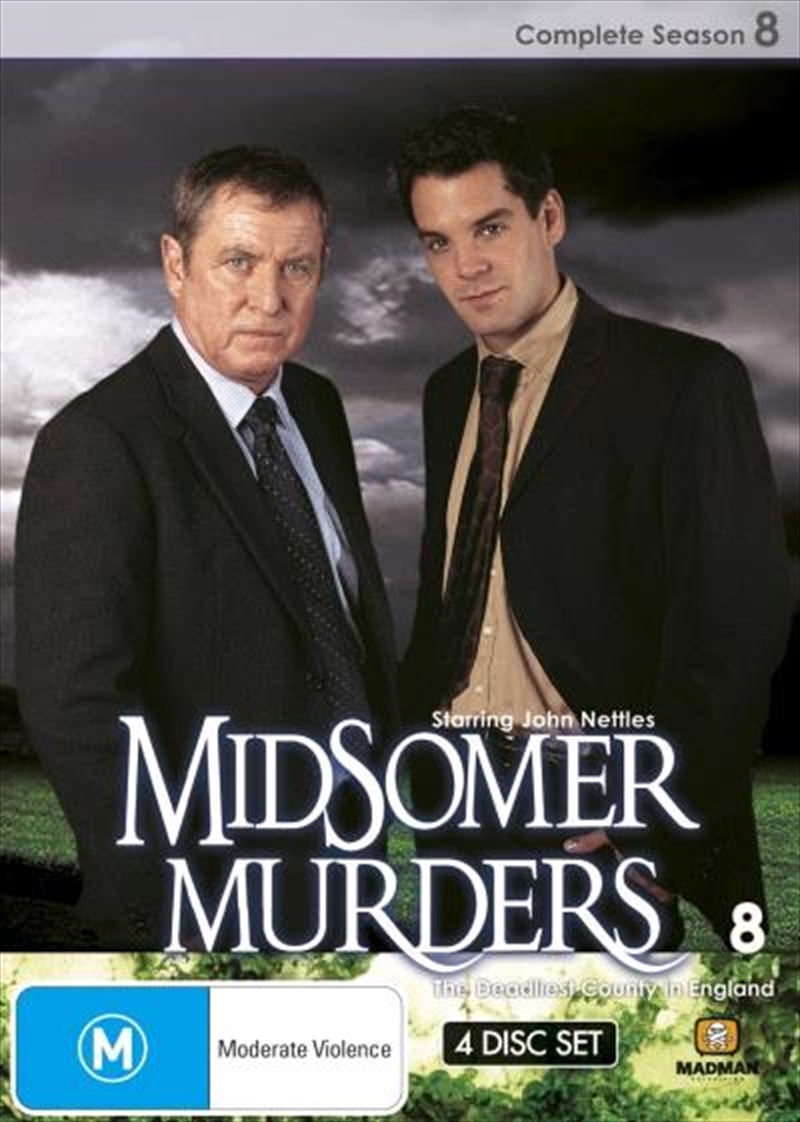 THINGS THAT GO BUMP IN THE NIGHT
In the Fletcher's Cross Village Hall, Rosetta Price is seated with her eyes closed, watched by an eager audience. She is the medium of the Spirit of Friendship group and issues a warning of impending sorrow for someone that evening. Shortly afterwards the body of a renowned skinflint and local funeral director Patrick Pennyman is discovered by his wife. Is this just a coincidental case of suicide? To unravel the mystery Barnaby and Scott must delve into the mystical goings on at the spiritualist group.
DEAD IN THE WATER
The villagers of Midsomer are soaking up the sun at the Midsomer Regatta. However, the tranquility of the race is shattered when the Veteran's race is interrupted by a body in the water. It us Guy Sweetman, Chairman of Midsomer Rowing Club who has been knocked unconscious and drowned. Guy was a serial philanderer who "didn't so much play the field as the entire countryside!" Was he murdered by a jealous husband or angry ex-girlfriend or was there a more sinister motive? Barnaby and Scott take to the water to unravel the mystery.
ORCHIS FATALIS
The annual Flower and Orchid Show at Malham Manor is a gentle village affair, with DCI Barnaby manning the Tombola. Simmering underneath this charming scene bubbles intense tension and rivalry between the orchidaceous horticulturalists. When two Orchid Society members are found dead Barnaby realises how vicious the competition is for these beautiful expensive and rare plants. Together with Sergeant Scott he sets about solving the crimes.
BANTLING BOY
It is the big race of the season on Midsomer, The Causton Gold Cup. The local favourite is Bantling Boy, a shorse owned by a syndicate led by Bruce Hartley. After a last minute jockey change Bantling Boy wins and Sam Tate offers to buy him. The syndicate cannot agree on whether or not to sell. Shortly after this heated debate Bruce Hartley is brutally clubbed to death. Barnaby and Scott investigate.
Second Sight
The Landlord of the Luck in the World public house in Midsomer Mere throws John Ransom out of his bar. There is a scuffle and moments later Random is found dead. Barnaby and Scott investigate and discover that Random's brother Max has been experimenting on him, testing for precognition, E.S.P. or second sight. But what was it that killed him? The fight, the tests, or something more sinister?
Hidden Depths
Felicity Turner and Antonia Wilmot are having morning coffee discussing their husbands. They hear shouts and moments later a man falls from the roof. They rush outside and find the body of Felicity's husband Nick. Barnaby and Scott are called in to investigate and discover that the Turners are heavily in debt. But was this suicide or does the shouting suggest something more sinister?
Sauce for the Goose
Plummer & Sons make a relish which is still family owned, however, there is unrest in the boardroom when a rival company tenders an offer to buy the business. To make matters worse a mysterious visitor on a factory tour is crushed to death by a forklift truck. Barnaby and Scott are called in to investigate.
Midsomer Rhapsody
Retired music teacher, Arthur Leggott, wanders from ther Cedars Care Home in the middle of night only to be found murdered the next morning in his soon to be auctioned home. When Barnaby and Scott discover a priceless musical score composed by Arthur's revered pupil, the late Joan Alder, they revive a terrible rivalry amongst her many admirers for posthumous ownership of her work.
DETAILS