For The Love Of Meat With Matthew Evans 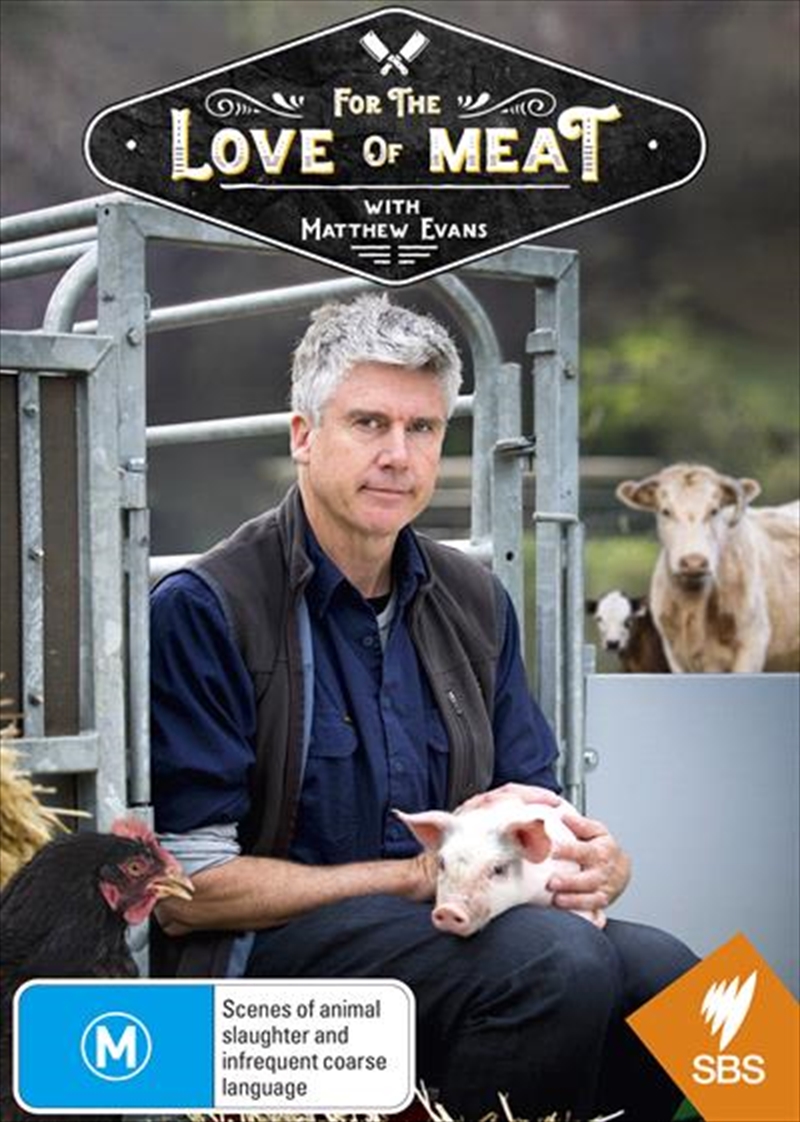 Shipping - See delivery options.
Postcode:
Quantity:
SEE MORE IN:
2 for $40 TV Documentaries All 2 for $40
Matthew Evans is on a mission to change the way Australians eat meat.

Matthew is on a mission to change the way Australians eat meat. We consume twice as much as is good for us, splurge 40% of our national food bill on it and our farm animals suffer far more than is necessary. Matthew is out to show that if we really looked behind the farm gate, wed start to make different choices about the meat we eat - choices that would be better for the animals, our health and the planet. Australians love meat. We eat twice as much as experts recommend for our health, three times more than the world average and more per capita than any country outside the U.S. And while 40% of our food expenditure goes on meat, the cost of chickens, pork and dairy has gone down in real terms. Its become so affordable that we consume up to three times as much of it as we did 25 years ago. We can thank American-led ingenuity in factory farming for our cheap meat. But few of us give much thought to what goes on behind the factory gate. Matthews wagering that if we knew, wed want to make better choices, for the animals, our health, and the planet. In each episode of What Meat Do I Eat? Matthew works with a diverse Australian community - a club, a school or the regulars at a favourite caf. Some members of each community will join Matthew for part of his journey to discover where the meat they eat comes from and whether there are better alternatives to factory farming. Hell challenge them to change, and well follow them on their journeys. Well cast to reflect Australias natural cultural diversity and well discover that the very key to eating better lies in our multiculturalism. While most Australians have been following Americas model of factory farming and eating overindulging in chicken breasts, steak, baconweve ignored the rich cultural heritages around us that have always known how to properly farm animals, how to eat well using less meat, and eat the whole animal. And of course its the foreign diets Mediterranean, Okinawan etc that have been shown to be healthier. In the series Matthew will encourage Australians to tap into our diverse multi- cultural communities to re-discover better ways of eating and preparing meat. And to help them along, some of our best cooks will share their knowhow Luke Nguyen, Poh Ling Yeow and Shane Delia. Matthew reckons that if we can change these three groups of people (our lab rats), and help them answer the question: What meat do I eat? then we can realistically expect to change the nation. Once hes won over the meat eaters of one community, he takes the campaign far and wide - traveling around the country in his Food Truck. If he can sell ordinary Australians the unsellable more expensive meat - then he reckons he will have a good shot at persuading a major retailer to sell only free range meat. Hell take on industrial farmers, politicians, top chefs, local butchers discovering and demonstrating tough truths about meat all along the supply chain. It will be challenging and confronting but the era of averting our eyes and sticking our heads in the sand is over. The stakes are high. Matthew wants to change the habits of our most committed carnivores, but he could also fail spectacularly. Who wants to be told what to eat? Is the reality just too hard for most people? Is it too expensive? Matthew is risking his Gourmet Farmer reputation, not to mention the wrath of both ends of the meat debate. Unlike his previous series Whats the Catch? Matthew is unlikely to be able to reach a broad consensus amongst multiple stakeholders on what to do. Opinions and attitudes are far more ingrained about animals and meat than they are for fish and seafood, where the simple call for more information on our labelling was almost universally embraced. Matthew will have to stick his neck out here, and there is very real jeopardy for him as he risks everything he has built up over the years.

Title: For The Love Of Meat With Matthew Evans