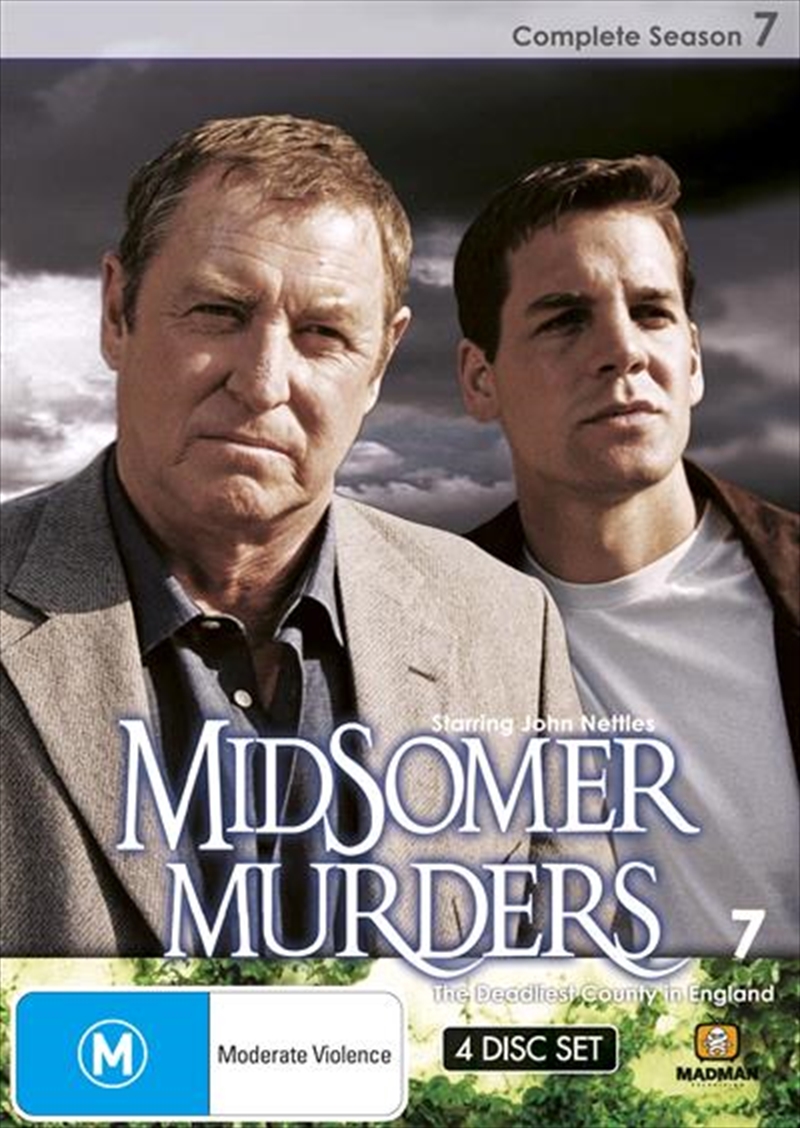 A local businessman has organized a clean up of the canal and Joyce and Cully are among the volunteers. Troy receives some good news about his Inspector exams. However, the celebrations are cut short when there is a call to say the canal tunnel has collapsed and Barnaby's wife is trapped inside. The tunnel also reveals a number of skeletons one of which is not as old as first thought. Fortunately Barnaby is on hand to investigate while Troy has his own case to look after.
2. BAD TIDINGS
D.S. Scott arrives from London the day after the Midsomer Mallow Residents' Association Spanish evening at the Village Hall. Before Scott can settle in he and Barnaby are already investigating a murder. The victim stormed out of the dance the night before after a row with her husband and is found wearing her Flamenco dress, with a red rose in her mouth. Meanwhile Cully is organising a reunion with four of her school friends that she hasn't seen for ten years.
3. THE FISHER KING
David Heartley-Reade, the son of a local Archaeologist, has written a book which tells of a golden chalice and ritual spear found in Midsomer Barrow. David is also eager for a festival of summer solstice to be held at The Barrow. The landowner, Anne Heldman, will not allow the celebration to take place and Anne's son Gareth points this out to David at a book signing. Later, when David finds Gareth's lifeless body by the riverbank, Barnaby and Scott investigate.
4. SINS OF COMMISSION
The Midsomer Literary Festival is being held in Midsomer St. Michael and is being supported by Sam Callaghan's publishing company. Each year a prize of 20,000 goes to the most worthy unpublished author. A writer is found dead at the bottom of his stairs. The dead man was depressed after an unsuccessful novel for which he blamed the publisher, Callaghan. The detectives investigate and discover the writer's neck has been expertly broken, also that another writer short-listed for this year's prize is a former member of the SAS and local troublemaker.
5. THE MAID IN SPLENDOUR
There is change afoot in Midsomer Worthy. Lawrence Haggard is looking to redevelop the village. One of Haggard's business associates is Stephen Bannerman, the owner of The Maid in Splendour public house. Shortly after closing time, Jamie Cruickshank, who works in the bar of The Maid in Splendour, is shot in the back outside a ramshackle old cottage in Hunter's Wood. Barnaby and Scott must unravel the mystery and catch the killer, but why would anyone kill Jamie?
6. STRAW WOMEN
Ex-nightclub owner Alan Clifford has bought the local manor and is at loggerheads with the church about the use of the chapel. He has transformed the building into a leopard skin and red velvet boudoir. The villagers are re-enacting a pagan celebration where witches were burned at the stake. Liz Francis, a young teacher who is new to the village, is organizing the children's song and dance. As the bonfire is lit there is a piercing scream. The cry is from the curate Alex Dakin who has been placed inside the burning straw effigy.