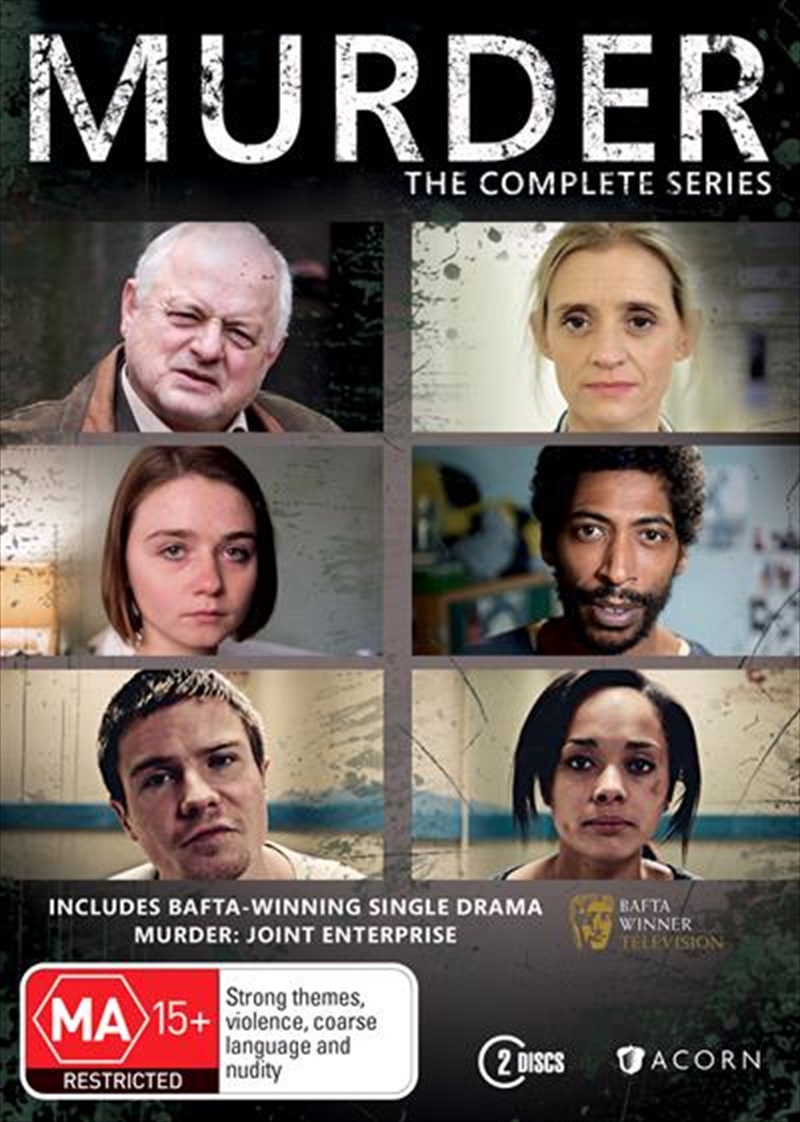 BBC BAFTA Award winning Drama, from the critically acclaimed Director of The Killing, Birger Larsen Using the same vivid format as its BAFTA-winning drama, Murder: Joint Enterprise, this Complete series throws a stark and unsettling light on three new cases. Rich in forensic and psychological detail, and with a unique depth of characterisation, each of the three films picks apart a murder in all its terrible complexity, hearing the story from every angle and casting the viewer as a jury-member forced to decide on guilt and innocence. Mixing techniques of documentary with the power, invention and breathtaking visuals of drama, these haunting and graphic whodunits live long in the mind.Film 1 - Murder: Joint Enterprise The BAFTA Award Winning DramaA woman lies dead in a Nottingham flat, her terrified sister barricaded in the bathroom. At 2.00am a young man in a bloodstained shirt is pulled over for speeding. The three only met that afternoon - what happened in those fatal hours? All there is to go on is what the two survivors say.Film 2 - The Third VoiceLeo Durridge stands accused of murdering his brother-in-law Rafe Carey. The two men were estranged following the death of Durridges young daughter while she was staying with Rafe and his wife. Lately, their relationship has tentatively resumed some of its former closeness.The action takes place around Peebles and on the banks of the Tweed, where Durridge claims Carey was swept away by powerful currents in the river following a storm. When Careys body is dragged ashore, however, he hasnt drowned at all hes been stabbed to death.Film 3- Lost Weekendset in Londons moneyed Belgravia, where wayward aristocrat Dominic Cotterall is besieged by accusations and rumours that hes murdered his wealthy American girlfriend, Arla Beckman, whos been missing for several days.Dominic is determined to disprove the slurs against him, put his drink and drugs history behind him, and show his father hes now a worthy son and heir to the vast Cotterall estates.But Arlas colleague Bryony Phelps is convinced hes killed her, and wont rest till shes got to the truth.Film 4 - The Big BangThe timescale of the episode covers a single night, and events occur almost entirely within the locked cells of a prison and a youth-offender institution. Three men (Curtis Kodro, and brothers Clyde and Whitmore Harris ) were ten years ago convicted of the murder of PC Stuart Durridge in the presence of his seven-year-old daughter Jess. Now 17, Jess has ended up behind bars herself.Due for release in the morning, Jess struggles to come to terms with both the legacy of her fathers murder and subsequent events resulting in her incarceration. In much the same way, the three killers feel a powerful urge finally to tell the truth about what happened on that fateful day and, in particular, which one of them was responsible for the murder Co-creators Robert Jones (Ballykissangel) and Kath Mattock (Buried), spent months in the public galleries at the Old Bailey researching real-life cases for inspiration and authenticity and the films are intercut with CCTV footage, live action and forensic evidence. The protagonists speak to camera giving their version of events. The story is heard from every angle and casts the viewer as a jury-member, forcing us to decide: Guilty or Not Guilty?
DETAILS