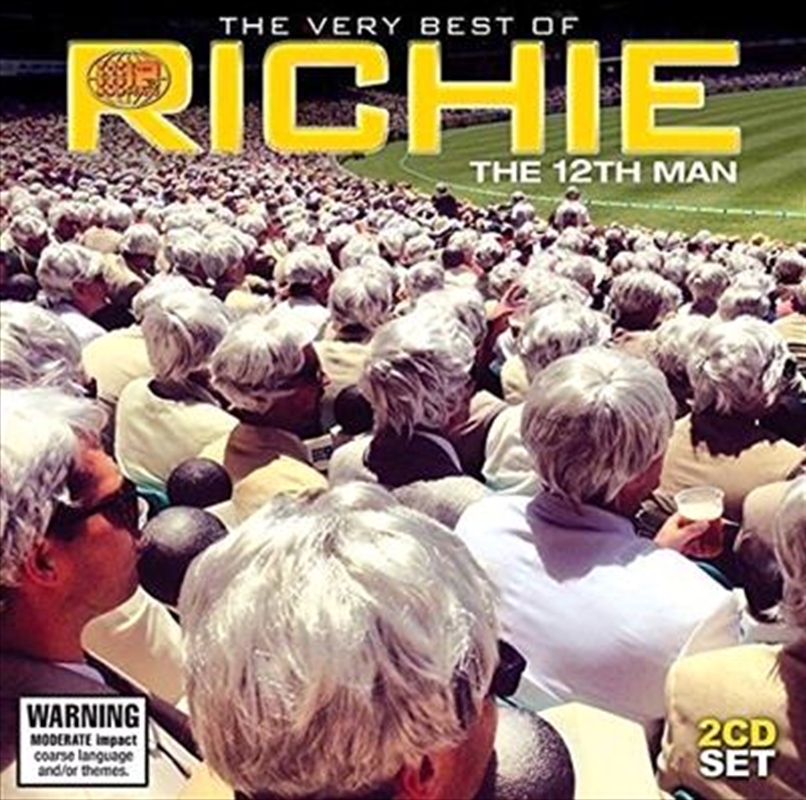 Shipping - See delivery options.
Postcode:
Quantity:
DESCRIPTION
Billy Birmingham’s illustrious recording career has seen him become the only Australian recording artist in history to deliver seven consecutive ARIA No.1 albums. And now a double CD tribute to the late great Richie Benaud featuring all of Billy’s favourite ‘Richie bits’ through the years is fittingly entitled ‘’The Very Best of Richie’’.

Never one to rush into things, Birmingham has deliberated on the tracks and sequence for months in order to provide a fitting 12th Man tribute to the man who has been such an integral part of his life, career and identity for more than 30 years.

“Richie certainly had some reservations about my 12th Man stuff over the years” says Birmingham. “My colourful use of language, for example, didn’t sit that well with a man who always tried to exude an image as pure and white as his famous jacket. But as an old school media man from way back, Richie could not fail to see the impact The 12th Man had started to have on the Australian psyche. In the early days Richie’s letters to Birmingham certainly indicated as much. In 1988 he critiqued one of Billy’s albums thus - “Plus mark, excellent entertainment as always. Minus mark, the same as last time. A bit too long, too much swearing for the sake of it and Chappelli’s voice still not right. But in a word: brilliant”.

Just as it’s not really summer in Australia without the cricket on TV, the same could also be said for the 12th Man’s dulcet, piss taking, commentary tones, which have also been an integral part of not only the Aussie summer but indeed, summers all over the world of international cricket. Earlier this year Pakistani cricketing legend Wasim Akram (Wasi Acrim) spoke on Fox Sports about his and his team mates love of The 12th Man CD’s, and how they were constantly being played in their dressing rooms. He also keenly observed that, whilst Richie and the boys have always been highly respected former cricketing greats and, in later years, extremely knowledgeable and popular commentators, it was the huge success of the 12th Man recordings that really turned Richie, Tony, Bill and co. into absolute cult figures, heroes, dead set legends!

So, as we enter the first Summer of Cricket since Richie’s untimely passing, why not re-live some of the 12th Man’s favourite Richie moments – fire up the stereo at home, or take the ghetto blorster down to the back shed (away from delicate ears) or whack the CD on in the car and hopefully you’ll get a few chuckles from “The Very Best of Richie”. But more importantly, be thankful that you lived in the era of the greatest commentator of them all – the man who wore the cream, the bone, the white, the off-white, the ivory and the beige jackets with such distinction - the incomparable Richie Benaud OBE.
DETAILS

Its Just Not Cricket

How Bout An Autograph