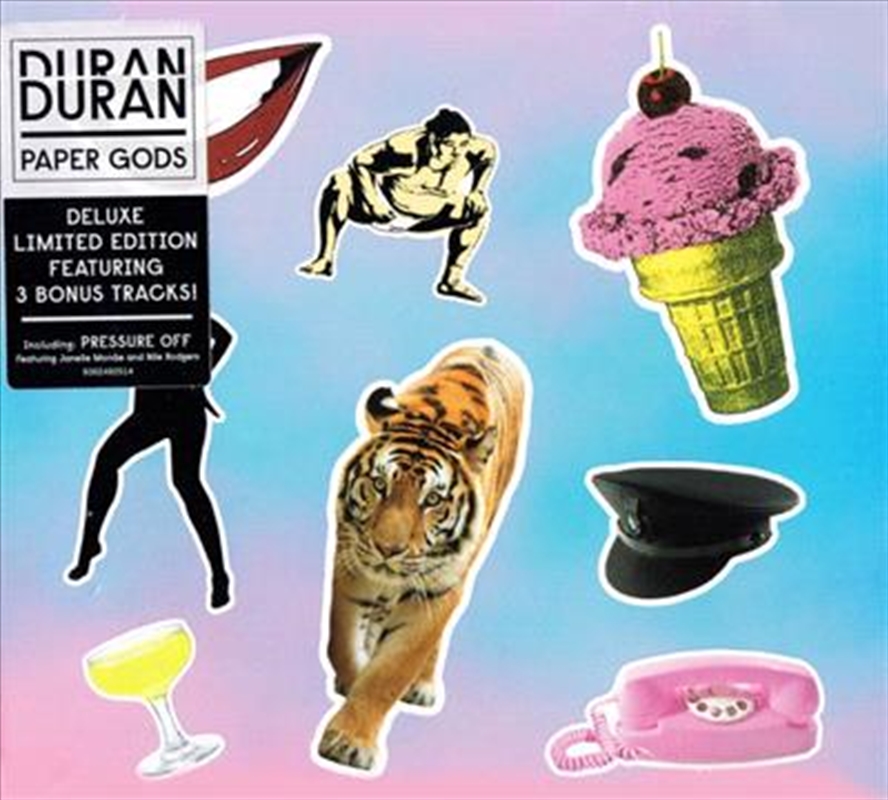 The songs on Paper Gods capture the duality and sense of conflict at the heart of Duran Duran's music. "It really goes back to that strange early Duran mix: the hard-edged pop, coexisting with this dark, weird, experimental side," John says.

"That's something that's essential to all of us," Nick adds. "It's great to be able to lift people's spirits - and your own - with a strong shot of pure pop, but the world we live in isn't all just made of that stuff, so it seems natural to me that we have kept one foot in the darker, more Gothic side of life."

Early sessions for 'Paper Gods' began in 2013, with Mark Ronson and engineer Josh Blair once again joining the band in their south London recording studio, as they had for 2011's 'All You Need is Now,' which was produced by Ronson. When Ronson was called away to begin working on his own album, Duran Duran and Blair hooked up with the Kanye West/Jay-Z collaborator Ben "Mr" Hudson, and the sessions caught fire. In the summer of 2014, Ronson returned once more to the project, adding long-time Duran collaborator, Nile Rodgers to the mix for two of the album's standout tracks. The remaining songs were co-produced by Josh Blair and the band.

"We found a whole new level of inspiration on this album," says Rhodes. "We've allowed ourselves the time to make music that we can be proud of," adds Le Bon. "I judge what we release by my favourite albums - Horses, Harvest, Let It Bleed, Blue, Transformer, Aladdin Sane. Those are classic albums. The only rule is it's got to be music you can live with for the rest of your life."

Chic co-founder Nile Rodgers, Mark Ronson and Mr. Hudson co-wrote, and produced the tracks "Pressure Off" and "Only in Dreams." Rodgers also features on the first single from what will be the band's 14th studio release. The former harks back to the taut funk of Duran Duran's 1986 album 'Notorious,' which was also co-produced by Rodgers.

"Notorious was a strong touchstone for the band," says Roger Taylor. All You Need is Now definitely reflected our earlier albums, but our starting point here was Notorious. We're fortunate to be able to be inspired by our own back catalogue - not many bands can say that."

In a collaboration overseen by China Chow, the band worked closely with Los Angeles-based artist Alex Israel, who created the album's cover art. It features a collage of images that reference the visual history of Duran Duran, each placed like a sticker on a reproduction of Israel's "Sky Backdrop" painting. The logo and graphic design are by Brian Roettinger.

Formed in Birmingham, England, in 1978, Duran Duran is one of the most culturally influential and commercially successful bands of all time, topping the charts around the world over the past three decades and selling more than 100 million records worldwide. The band has been honored with multiple Grammy, BRIT, Ivor Novello, and MTV Video Music Lifetime Achievement Awards, as well as a 20th Century Style Icon award from the City of Milan.

3. You Kill Me With Silence

7. What Are The Chances?