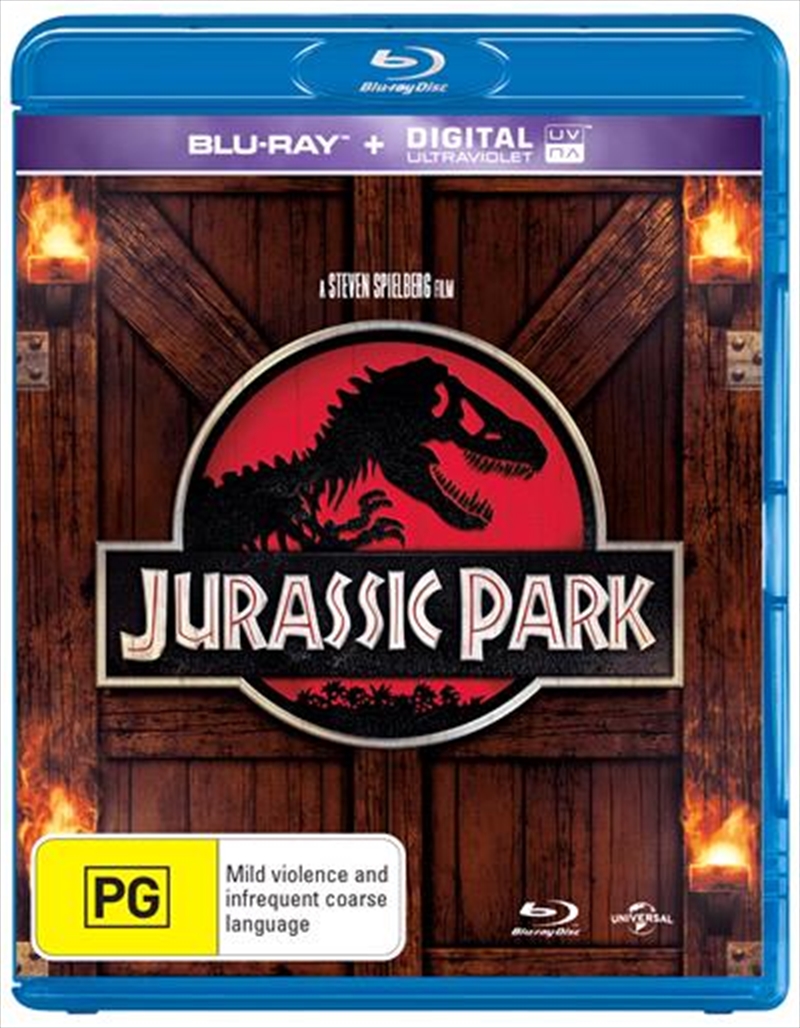 An Adventure 65 Million Years In The Making

This thrilling adventure features Sam Neill, Laura Dern, Jeff Goldblum and Richard Attenborough. Featuring incredible special effects and action-packed drama, Jurassic Park takes you to a remote island where an amazing theme park with living dinosaurs is about to turn deadly, as five people must battle to survive among the prehistoric predators. Rediscover the breathtaking adventure you'll want to experience again and again.

If you were to tell me that Steven Spielberg managed to direct both ‘Jurassic Park’ and ‘Schindlers List’ in the same year and both turned out to be masterpieces, I would say you were out of your mind, yet here we are... Spielberg pulled off the impossible, directing two of the best films of all time in the same year. Two films, mind you, that is completely different from one another. One is a World War II period piece, the other is an action-adventure film where dinosaurs wreak havoc on an unopened theme park, (I will let you work our which is which).
‘Jurassic Park’ is one of the best movies ever made and is personally one of my favourite films of all time. Not only from a storytelling perspective but from the amazing visuals that Industrial Light and Magic were able to create with Spielberg at the helm and the creative way of showcasing these visuals in a time where computer-generated effects still were not heavily used in cinema. The cast is wonderful with the likes of Sam Neill, Jeff Goldblum, Laura Dern, Richard Attenborough, and Samuel L. Jackson populating the screen. The cast of characters are all fantastic delivering quotable lines of dialogue that I still use in everyday life – ‘life, uh, finds a way’ (Dr. Ian Malcolm) or ‘Hold on to your butts’ (Arnold). Sam Neill’s Dr. Alan Grant, is still one of my favorite characters of the 1990s. His dislike of children and his eventual love of kids by the end of the film is among one of my favourite character arcs of the 1990s as well. But no one holds a candle to Jeff Goldblum’s devilishly charming Dr. Ian Malcolm. He is witty, sarcastic, and ever-so-charming. He is wonderful in this film and he left a Jeff Goldblum sized hole in popular culture.
Jurassic Park captivates us with wild and suspenseful sequences are all iconic, with the T-Rex attacking the car with the two kids (Lex and Tim) inside being my favourite scene of the whole film closely followed by Lex and Tim being hunted by the velociraptors in the kitchen, which is equally suspenseful. The films' amazing animatronic effects are still among some of the best of all-time. The film feels real and surprisingly does not feel dated even though it was released over 27 years ago. The 4K Ultra High Definition (UHD) transfer of this film is also amazing. This is easily THE BEST this film has ever looked. John Williams's score is also among one of his best. Mind you he has composed some of the greatest scores of all time, including: ‘Indiana Jones’, ‘Jaws’, ‘Star Wars’, the ‘Harry Potter’ theme, and many more. ‘Jurassic Park’ is incomplete without its theme, by the legendary composer. Every pulsating musical beat adds to the tension, wonderment and joy of the film and really elevates the film. It is simply fantastic. The film is iconic and Spielberg again revolutionised the blockbuster genre, providing audiences with a unique experience that is still by far the best Jurassic Park film we have received. It’s a classic for a reason and ranks among one of my favourite films of all time. I am giving ‘Jurassic Park’ a perfect 10/10!