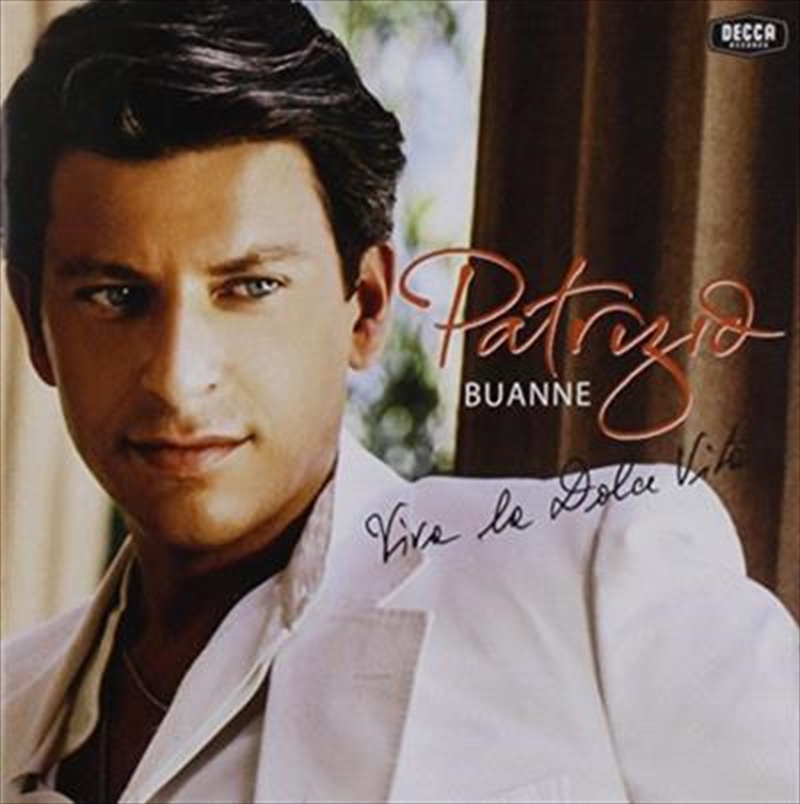 Viva La Dolce Vita celebrates the best of romance, passion, and emotion, performed in Patrizio’s signature sentimental style. From the extremely emotive lead track I Will Love You to ballads sung in Italian set to lushly accompanied orchestral scores, Viva La Dolce Vita takes the listener on a journey through glamorous and exuberant melodies – bound to inspire and entertain. The album also includes well-known hits such as Charlie Chaplin’s Smile, original compositions including I Will Love You, and popular Italian favourites such as Gli Occhi Miei.

Buanne was born in Vienna, raised in Napoli where his family originates from, and studied to become an interpreter.

The dark, ruggedly handsome singer who speaks six languages fluently has reached multi-platinum status worldwide since 2005, and has won over a legion of fans with his music. His albums are rooted in the pop traditions of his Italian homeland and have been recorded at Abbey Road studios in London and Capitol Studios in Los Angeles — featuring songs in a variety of languages for special limited edition bonus tracks.

Speaking about his new album, Patrizio highlights its accessibility: “As a versatile performer, I’m open to trying new styles, and always love to give my fans something more! Viva La Dolce Vita features international pop standards, some in different languages, which really spreads the sentiment in my music far and wide.”

Patrizio has performed for the Pope, royal families, and a US president. He has toured numerous times across Australia, New Zealand, Asia, South Africa, Europe and the USA.

Similar to Chris Botti, Lady Gaga, Julio Iglesias or Tom Jones, Patrizio is known for creating timeless songs where sentiments are conveyed credibly and passionately. Patrizio interprets sentiment with his unique, recognisable, romantic, and above all European approach and charm.

I Will Love You

With You (di Sole D'azzurro)

Bella Signorina (with The Ugly Duck)