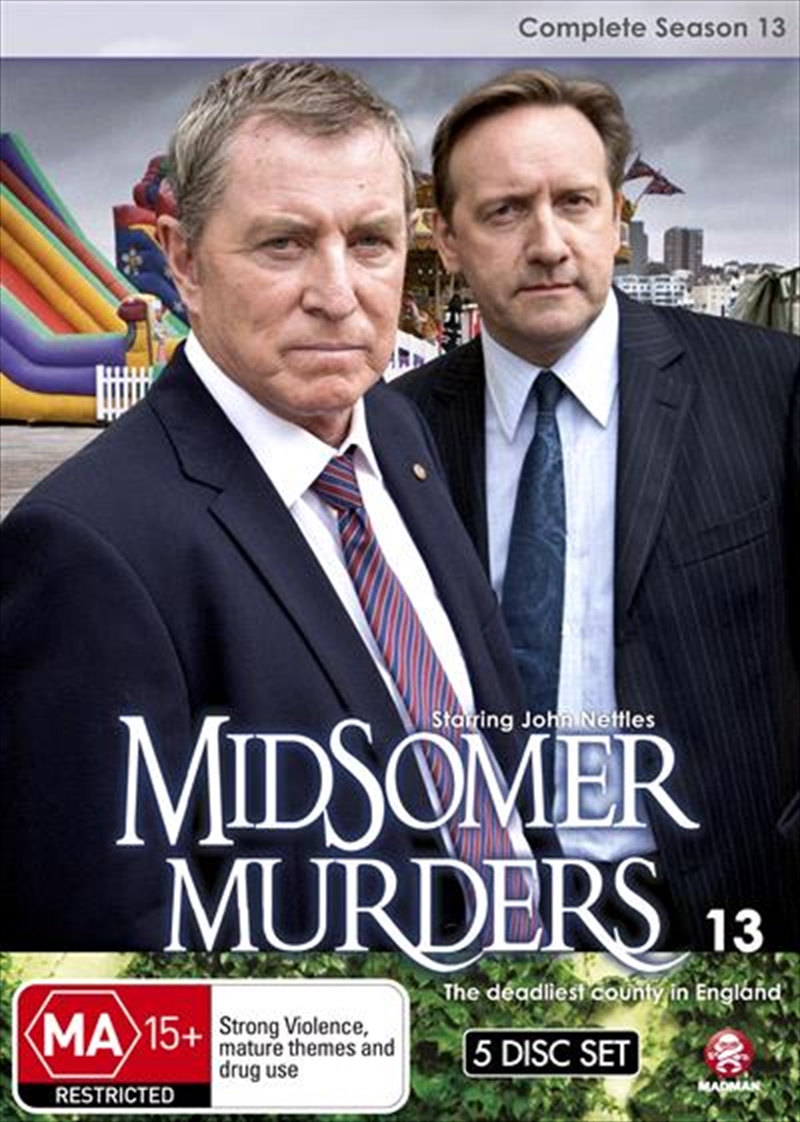 The Made to Measure Murders Milton Cross is a Midsomer village owned by Edward Milton. Many of the villagers are beholden to Milton for their livelihoods and their homes and as such do what they can to appease him. Woodley and Woodley, the local bespoke tailors, are waiting to find out if their lease will be renewed, however Sonia Woodley has found something which could jeopardise the shop. When she is found murdered, her unusual wounds perplex Bullard and Barnaby finds himself investigating a village living in fear.

The Sword of Guillaume Barnaby joins a trip from Midsomer Parva to Brighton because he's suspicious about a deal to buy coastal land for holiday chalets by Causton's mayor. Also against the proposal is Lady Matilda William, a descendant of a French knight Sir Richard Guillaume, whose son Richard will be the last of the line because of brain damage sustained in an attack 20 years ago. When a hated property developer and a voluptuous hotelier are beheaded, Barnaby starts to piece together the puzzle of The Sword of Guillaume. Neil Dudgeon plays DCI John Barnaby (Tom's Cousin) and has a guest appearance in this episode! Blood on the Saddle Ford Florey is a town with a Wild West Society and many grudges. During a Wild West show at the local fayre, the witch on the Dunk the Witch stall is well and truly dunked. Laughter turns to horror when she does not get up and the water in the tank starts to turn red. Barnaby and Jones need to be quick on the draw to track down the murderer. The Silent Land On a dark night in the village of March Magna, Barnabys wife Joyce swerves her car to narrowly miss a shadowy figure in the road. Or so she thinks. Later that night a body is discovered in the old cemetery. Did Joyce hit someone after all or was the victim, who seems to have plenty of enemies, killed by one of the villagers? Barnaby and Jones have their work cut out as all the villagers seem to be hiding something but is it murder?

From the riverbank in the grounds of the manor she sees a woman jump from the bridge and disappear underwater. When Barnaby and Jones start investigating the possible drowning they discover unsavoury connections to the past that could prove lethal twenty years later. The Noble Art When local hero turned world champion boxer, John Kinsella returns to Midsomer he manages to ruffle more than a few feathers before a series of murders begins. With a reconstruction of the first ever world title fight taking place at Morchard Manor, is this the perfect cover to ensure John himself is out for the count?
Looking for a motive as well as the truth proves more difficult than ever and the murders continue. Not in My Backyard A planning dispute at an open gardens event at Swanscombe House turns to murder after a leading light in the Midsomer Conservation Society suspects her neighbours are involved in a money-making development scam. Political wrangling, burglaries and sexual liaisons abound in picturesque Great Pelfe but why is someone driven to start killing? Fit for Murder As Barnaby approaches the day in his own life on which his father died prematurely of a heart attack, intimations of mortality lead him to the prestigious Midsomer Health Farm. There the bizarre fads and fetishes of his eccentric fellow residents lead to a sequence of sudden deaths which finally persuade Barnaby that his own life must turn in a new direction..
DETAILS