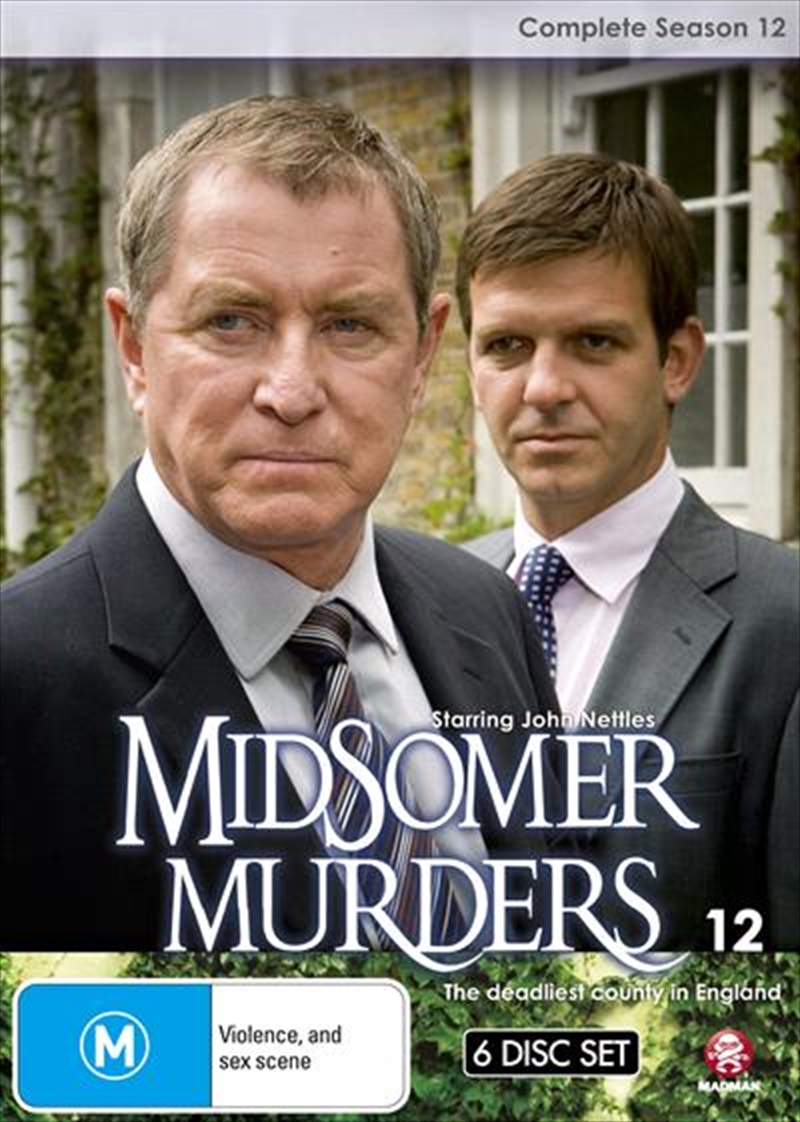 John Nettles returns to investigate deadly deeds and gruesome goings-on in all 7 cases from Season 12 of the top-rating mystery, MIDSOMER MURDERS. Based on the award winning Inspector Barnaby novels created by mystery writer Caroline Graham, unflappable detectives DCI Tom Barnaby and DS Ben Jones are drawn into the worlds of golf, spying, cricket and cycling as mystery, murder and mayhem shatter the peaceful and picturesque surroundings of the Midsomer villages once again.

CASE 1 THE DOGLEG MURDERS The peaceful setting of prestigious Whiteoaks Golf Club is rocked by death and controversy when a golfer is bludgeoned to death near the notorious 13th hole known as Crisps Folly. Barnaby and Jones discover gambling is rife at the club, along with illegal money-lending and assault. Then as the club considers giving ordinary villagers full membership rights, another golfer is killed.
CASE 2 THE BLACK BOOK Felicity Law approaches Anthony Prideaux to sell a painting she has found in her attic. Recognising its worth as a painting by esteemed Midsomer artist Henry Hogson, Anthony tries to con her into selling it for a trifling amount. However Felicity is not one to be conned and eventually the painting is offered for sale by auction. Despite Patricia Blackshaws best efforts on behalf of the Hogson Society, she is outbid by an American collector and she cannot hide her disappointment. When Felicity is found strangled and tortured, Barnaby and Jones investigate and learn about a lot more than art.
CASE 3 SECRETS AND SPIES Barnabys secret past as a spy is revealed when a former agent is gashed to death after a cricket match in Midsomer Parva. While locals blame the beast of Midsomer, Barnaby realises the killing has links to the local network of spies during their time in Cold War Berlin. But then he is thrown off the case by MI6.
CASE 4 THE GLITCH Barnaby and Jones are investigating the infamous Bucketman attacks in which fast cars and their drivers are covered in red paint, most of whom work for Soft Earth Systems Inc. Meanwhile, George Jeffers has discovered a glitch in the air traffic control system Soft Earth is launching, however Clinton Finn, the firms owner, is determined to release the technology regardless. When an attempt is made on Jeffers life, Barnaby and Jones investigation steps up a notch.
12.5 SMALL MERCIES The mysterious murder triggers a dark series of events which see Barnaby and Jones uncovering affairs, tragedy and long-held family secrets. The busy body Compton sisters do not want to see the village change, however the tawdry web of relationships within the community lead to complications, with dire consequences. Are there one too many dysfunctional families in Little Worthy? Can Barnaby uncover the truth to protect the people of this once model village? Guest stars David Ryall, Margaret Tyzack and Caroline Blakiston. Screenplay by Peter Hammond. Directed by Peter Smith
12.6 THE CREEPER Midsomer has been hit with a wave of burglaries by a master house-thief who defies even stringent home security and has been dubbed The Creeper. It is only when the Chief Constable is on the receiving end that Barnaby is called into action and, when a body is found, the investigation moves from petty theft to personal agendas. Barnaby is convinced there is more to discover, unravelling the long-standing social affairs of gentry and gangsters alike in his quest to stop The Creeper. Guest stars Rik Mayall, Paul Shelley and Jenny Agutter. Screenplay by Andrew Payne. Directed by Renny Rye.
12.7 THE GREAT AND THE GOOD The local village school is threatened with closure due to falling numbers of children, and a group of ladies who lunch compete murderously for the status of charitable saviours. As murder and mayhem engulf the embattled school teacher she is rescued by the love of Barnabys prime suspect until his innocence is proved and love conquers all.