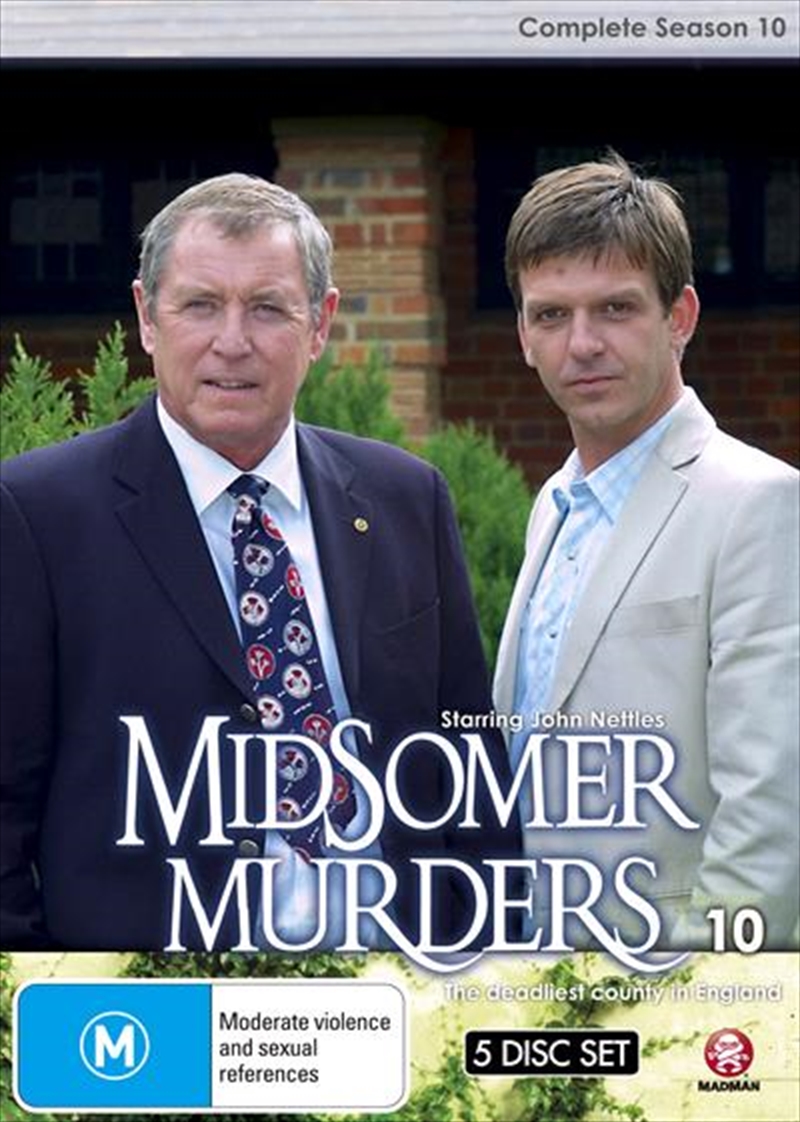 Nothing is quite as it seems behind the closed doors of Midsomer County's chocolate-box cottages and picture perfect English countryside. The rural neighbourhoods are a hotbed of jealousy, intrigue, betrayal and murder as D.C.I. Tom Barnaby and his assistant D.S. Ben Jones investigate deadly deeds and gruesome goings-on. John Nettles and Jason Hughes star in the highly acclaimed, award-winning British whodunit series with guest stars including Stephanie Cole, Gareth Thomas, Liza Goddard, Chris Barrie, Suzi Quatro, David Troughton and many more. Collected together for the first time, this 5 disc set includes all 8 cases from Season 10, including a bonus disc featuring Super Sleuth a special Making of Midsomer Murders documentary.

CASE 1 DANCE WITH THE DEAD Young lovers Simon Bright and Laura Sharp are kissing in the backseat of a Humber car in a disused hanger. The next morning Simon's body is discovered there by Frances Kirby during her morning jog. There is no sign of Laura. Barnaby suspects that Simon may have been involved in a suicide pact, however the evidence tells a different story.
CASE 2 THE ANIMAL WITHIN Retired society photographer Rex Masters disappears as his niece Faith Alexander arrives on a visit from America. Miles King, Rex's gardener, is shocked when he meets Faith as Rex told everyone that Faith and her entire family had died in a plane crash a year before. The following morning Rex's body is discovered in Crofter's Weir. Barnaby and Jones delve into the village's past to uncover the truth.
CASE 3 THE KING'S CRYSTAL The village of Midsomer Magna is devastated by the closure of the King's Crystal glassware factory. The closure comes after the seemingly accidental death of co-owner Alan King. The factory workers are jobless and, left with no financial security, begin to rail against the accountant, Peter Baxter, and the remaining co-owner, Charles King, about their redundancies. When Baxter's body is found in the water meadows stabbed to death with a Masonic dagger, Jones suggests suicide, but the pathologist Dr. Bullard and Barnaby suspect foul play.
CASE 4 THE AXEMAN COMETH When Barnaby's favourite rock band, Hired Gun, reform to play a gig at the Midsomer Rocks Festival, paranoid lead singer Gary Cooper is convinced that someone is trying to scare them off and stop the reunion. The guitarist Jack Axeman McKinley and the rest of the band are staying at Gary's estate, Badger's Hall, while they are in town. As accidents appear to happen around the band members, will Barnaby catch the killer before they are all dead?
CASE 5 DEATH AND DUST When Delyth Mostyn announces that she is marrying local doctor James Kirkwood and selling her home to travel the world with him, her children are furious. According to local gossip, James is a serial womaniser who pushed his late wife over the edge. Unable to make a house visit one stormy evening, James lends a colleague, Alan Delaney, his new car and Alan goes in his place. When Alan's dead body is discovered the following morning Barnaby and Jones are called in and the investigation leads to North Wales.
CASE 6 A PICTURE OF INNOCENCE When the Luxton Deeping Photographic Society refuses to accept digital images in their annual exhibition, aspiring local photographer Steve Bright is enraged. Steve and his friends regard the traditional method of photography favoured by photo shop proprietor Headley Madrigal and his friend Lionel Bell as old and antiquated. An intense rivalry and mutual hostility exist between the two groups culminating in a showdown between Lionel and Steve at the exhibition. The next morning Lionel is strangled to death. Barnaby and Jones investigate.
CASE 7 THEY SEEK HIM HERE When violent criminal George Ince and his associate Jed Norris are employed as security guards at Midsomer Magna Manor where a production of The Scarlet Pimpernel is being filmed, Barnaby and Jones suspect they are planning an inside job.
DETAILS