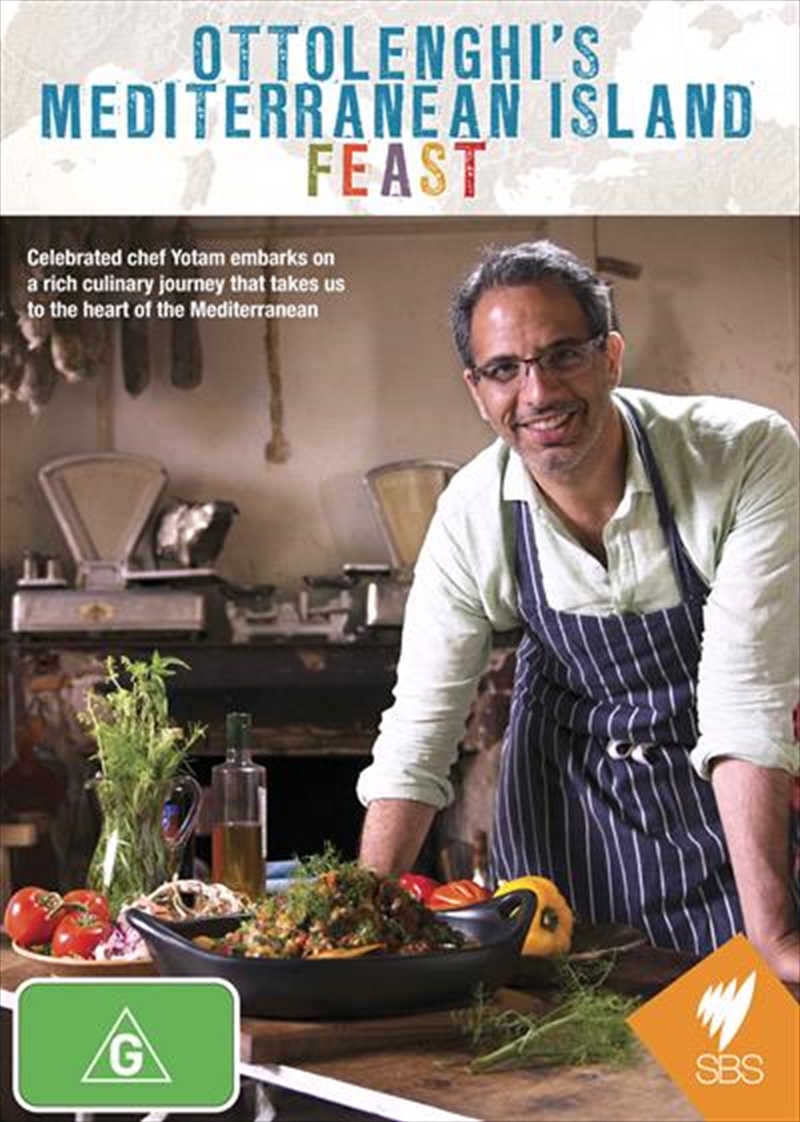 Shipping - See delivery options.
Postcode:
Quantity:
Yotam Ottolenghi travels to four of the Mediterranean's most beautiful islands to explore the flavours and secrets of these culinary jewels.

Yotam Ottolenghi has transformed how we cook, eat and view Mediterranean food. Growing up in Jerusalem at the crossroads of conflicting cultures he developed a passion and a creative restlessness that inspired him to innovate and challenge traditional cooking conventions. Now, on a journey that will take him from the sun soaked island of Corsica to the unrivalled beauty of Crete, Yotam travels to the jewels of the Mediterranean that have captured his imagination since childhood. And with cinematic camerawork and stunning food photography we go with him. In this series, Yotam will explore how the islands of the Mediterranean that have been invaded and traded through East and West have absorbed and adapted the foods of the many civilizations, empires and nations that have crossed their shores creating dishes that, although bearing testament to the history of the isles, are also extraordinarily local and unique. He will begin his journey exploring the wild, rugged beauty of Sardinia and Corsica, before heading down towards the Balearics and the almond covered isle of Mallorca, then on towards the complex island of Crete. Across the series Yotam will meet cutting edge chefs and local food heroes; experience the remarkable repertoire of food on the islands; and pick new and exciting flavours to blend with traditional and timeless classics. Beautifully photographed mouthwatering meals will be one of the benchmarks of the series. But this isnt just a succession of stunning recipes; we decode history on a plate. As well as a cultural and culinary exploration, this is also a personal journey of inspiration for him, providing the impetus for new flavours in his own recipes. Episode 1 - CORSICA Yotam travels to the stunning French island of Corsica, where he discovers how the lush green landscape, called the maquis, flavours and infuses the food, from charcuterie and olive oil to cheese and honey. He prepares a roasted fish with aromatic Corsican olive oil; Swiss chard and herb tart with local cheeses; honey and apricot trifle with walnuts and lavender; and chestnut cake, a classic island staple. And to celebrate Corsica's love affair with meat, Yotam makes a rich veal stew with olives, pancetta and a roasted pepper salsa. Episode 2 - MALLORCA Yotam searches for authentic local cuisine, discovering wonderful local ingredients including ruby red prawns - the star ingredient in his deconstructed paella. He leaves the busy beaches behind and heads inland, discovering a wonderful larder of local ingredients, including roast suckling pig slow-cooked in a bread oven; tomatoes sweetened on the vine; and oranges ripened in the island sun. Yotam creates a Mediterranean feast of Spanish and Moorish origin: salt-crusted fish stuffed with aromatic fennel; a sweet and salty salad of caramelised oranges with goats cheese; and a deliciously rich dessert of apricots, almonds and raisins. Episode 3 - CRETE Yotam visits Crete and explores its rich and complex culinary history. In the ancient capital of Heraklion, Yotam makes a variation of the Cretan meze dakos, a marriage of tomatoes, crumbled feta, olives and oregano. In the fishing port of Agios Nikolaos, he marries octopus marinaded in wine with tender baby squid, stuffed with tomatoes and okra. On a trip inland, Yotam uses feta for a cheesecake with a ripe cherry compote. He also prepares a feast of spit-roasted pork souvlaki, served with his twist on tzatziki. Episode 4 SARDINIA Yotam travels to Sardinia to explore the island's unique food traditions and flavours. In the beautiful fishing port of Bosa, he cooks one of the Mediterranean's greatest meals: freshly caught lobster roasted on an open fire. Leaving the coast behind, Yotam travels deep into Sardinia's rugged heartland, sharing a meal of spit-roasted lamb and a salad of figs and roasted radicchio, with three generations of shepherds. And on a mountain top at dawn he learns the secret of producing silky soft cheese for a dessert