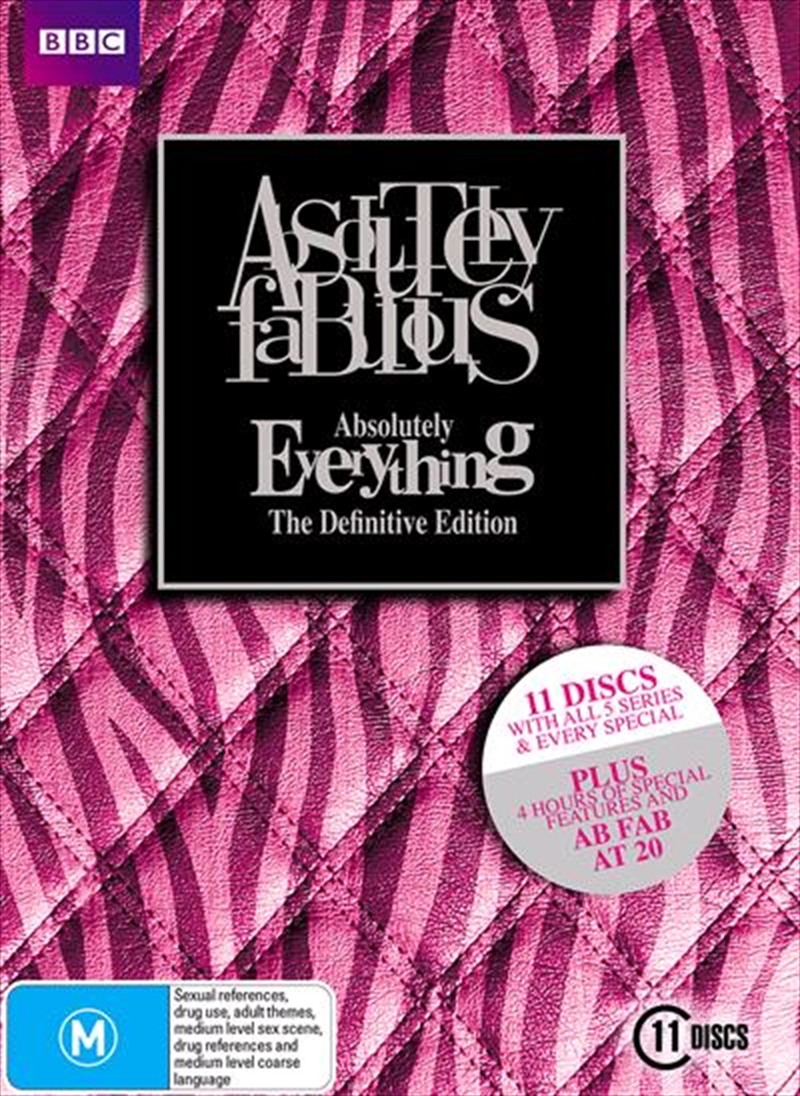 Shipping - See delivery options.
Postcode:
Quantity:
DESCRIPTION
11 Discs With All 5 Series & Every Special... It's Absolutely Everything!

Absolutely Fabulous: Series 1
Edina runs a fashion agency, wears designer clothes and lives the life of a jet-setter. Her friend Patsy smokes like a chimney, drinks like a fish and dresses like a dream. Life would be one long party - if only Edina's swotty daughter would stop complain ing and start joining in like a normal teenager...

Absolutely Fabulous: Series 2
Series two finds Edina looking for a new best friend after a row with Patsy, contemplating mortality after a death in the family, coping with a sudden drop in inco me, hospitalisation, re-birthing, and going on holiday!

Absolutely Fabulous: Series 3
Edina's got an electronic organiser and a plan to become a model - of efficiency that is. And what's more efficient than flying to New York on Concorde for a doorknob? Saffy leaves home to attend college, Patsy decides to move to New York and suddenly Edin a is free to change the whole direction of her life...

Absolutely Fabulous: Series 4
Edina has moved with the times, expanding her business interests from the world of fashion PR into the interactive medium of television production. Patsy is somehow promoted - despite her obvious overindulgence in any substance or liquid that comes to hand. Saffy, Edina's daughter, continues her attempts to move out of her mother's house while Mother has taken up salsa dancing and internet shopping.

Absolutely Fabulous: Series 5
Sweetie darling, they’re back. The comedy phenomenon that took the world by storm is as outrageous as ever. Eddy is now a Celebrity PR guru and Patsy her ‘style consultant’. Between them they have a plethora of new showbiz pals including an ex-Spice Girl and a Hollywood starlet. No celebrity is safe. The long-suffering Saffy returns from her travels abroad with some big news for her mother – does La Croix do a children’s range?

Absolutely Fabulous: AB Fab At 20
Theyre back and behaving as outrageously as ever! 20 years after Eddy, Patsy, Saffy, Bubble and Mother first staggered into our lives, they return for three fantastic episodes! Patsy might be hiding a few more wrinkles, Eddys designer outfits are a size (or three) bigger, but the ageing fashionistas have lost none of their appetite for living it large, regardless of how ridiculous they look! In these hysterical episodes, Saffys new best friend forces Patsy to finally reveal her age to the nearest decade or two; Eddy signs up a legendary French actress for an Albert Hall performance, but can she sing? And, as London goes Olympics mad, someone rather important (Hollywood, darling) rents the house as the ladies undertake some gold medal schmoozing. Special Features include Absolutely Fabulous Sport Relief Special with a host of guest stars including Kate Moss and Stella McCartney.
DETAILS