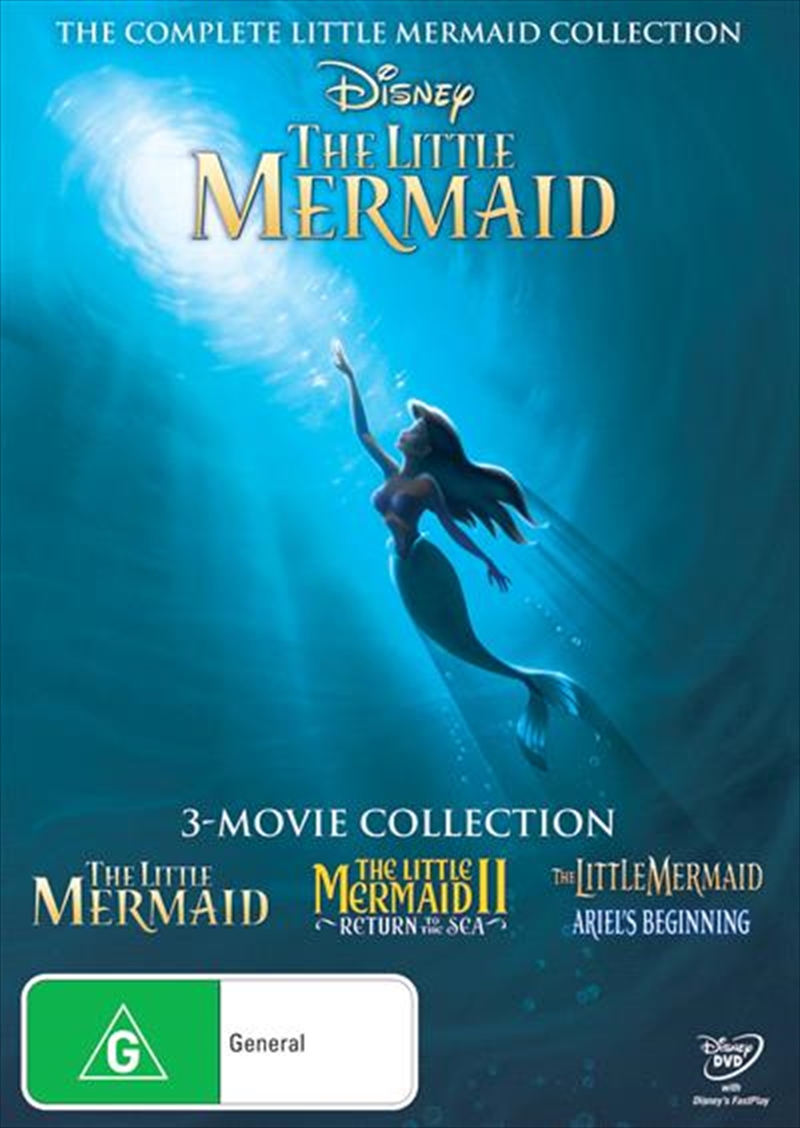 Shipping - See delivery options.
Postcode:
Quantity:
SEE MORE IN:
The Little Mermaid
DESCRIPTION
Every Story Has a Beginning, But Only One Begins Under the Sea

See how it all started for one of Disney's most beloved characters in the all-new movie, The Little Mermaid: Ariel's Beginning. Imagine a time long before Ariel met Prince Eric and walked on land - a time when music was banned from the underwater kingdom of Atlantica. Torn between family duty and her love of music, Ariel must make the most difficult choice of her life. With the help of her friends Sebastian and Flounder, and her six amusing sisters, will the young mermaid be able to restore music, friendship and love to the kingdom? Dive into Ariel's magical musical adventure, teeming with surprises, breath-taking animation and original songs. All your favourite characters return, along with some wonderful new friends, for an unforgettable tale your whole family will enjoy!Synopsis - Little Mermaid, The: Special Edition (1989) All the music, fun and adventure under the sea resurface in this magical, fully restored edition of Disney's 28th animated Classic. Groundbreaking animation, colourful characters and an Oscar? winning song and score make THE LITTLE MERMAID even more popular today than the day she first splashed on screen!

Ariel, the fun-loving and mischievous mermaid, lives in an underwater paradise with her father King Triton, and is enchanted with life about the sea? even more so after saving a handsome prince from drowning! Against the advice of her best friend Flounder and the hilarious reggae-singing crab Sebastian, Ariel strikes a deal with the sea witch Ursula. In exchange for her beautiful voice, Ariel will become part of the human world. But what seems a dream come true becomes a heated race against time in which Ariel must win the prince?s love and save her father's kingdom.

With its enchanted sound quality and breathtaking imagery, this tale of pure isney magic can finally be experienced like never before!Synopsis - Little Mermaid II, The: Return To The Sea (2000) Disney's spectacular undersea classic, The Little Mermaid, lives on in an all-new story bursting with the same captivating musical style, unforgettably colourful characters and brilliant animation that made the original film an Academy Award-winning favourite. After rejoicing over the birth of their daughter Melody, Ariel and Eric face a new threat - from Ursula's revengeful sister Morgana - that forces them to hide Melody's true mermaid heritage. But Melody ultimately ventures into the sea and, in her dream to be a mermaid, becomes a pawn in Morgana's plot to control the Seven Seas. Now, Ariel must reunite her childhood friends, Sebastian, Flounder and Scuttle, to rescue her daughter and restore harmony to her friends! An all-star cast returns, including Jodi Benson (Ariel) and Samuel E. Wright (Sebastian), for a remarkable adventure teeming with surprises and five phenomenal new songs.
TRAILER
DETAILS