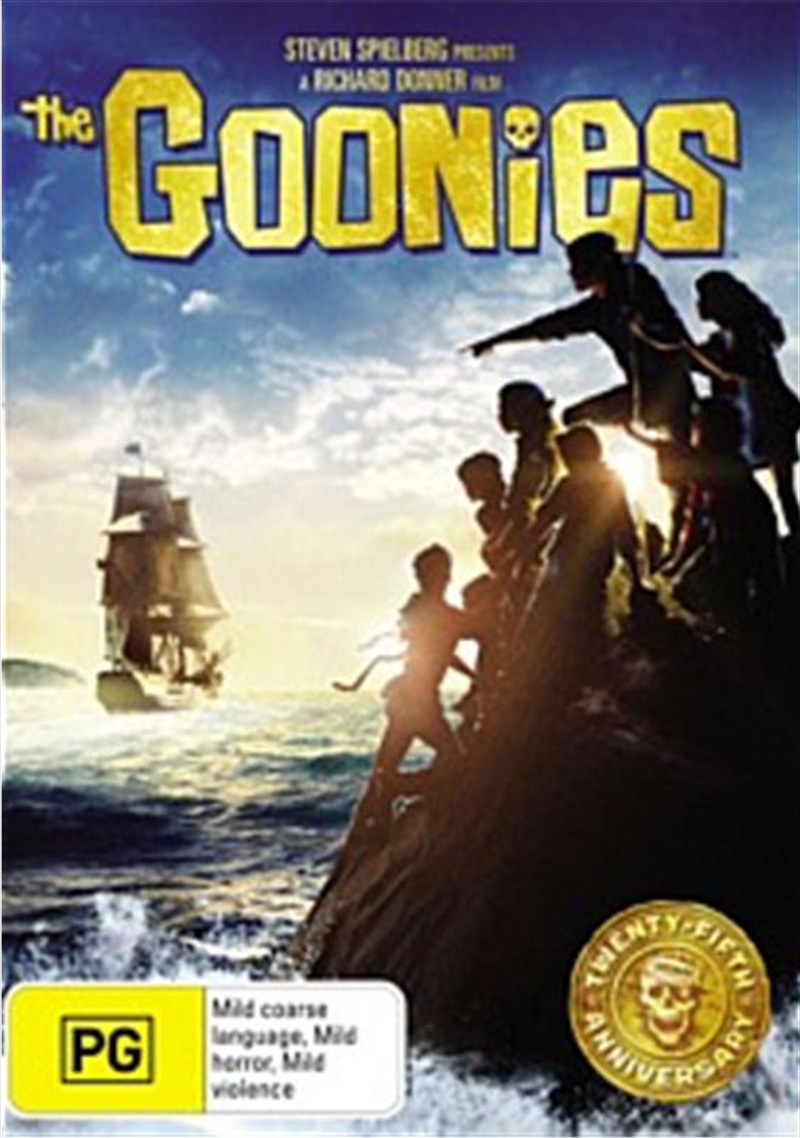 From the imagination of Steven Spielberg, The Goonies plunges a band of small heroes into a swashbuckling surprise-around-every corner quest beyond their wildest dreams! Following a mysterious treasure map into a spectacular underground realm of twisting passages, outrageous booby-traps and a long-lost pirate ship full of golden doubloons, the kids race to stay one step ahead of a family of bumbling bad guysand a mild mannered monster with a face only a mother could love.

Review of The Goonies by Eddie @ The Movie Guys

What is one’s childhood without The Goonies? It’s a childhood that misses out on unquestionably one of the most purely enjoyable and unbridled joyous adventures ever committed to screen and a movie that to this day stands the test of time thanks to it’s witty script, fantastic child actors and a story that unlocks the adventurer that hopefully dwells within all of us.
Coming from the great mind that is Steven Speilberg and directed by Superman/Lethal Weapon helmer Richard Donner The Goonies was and is the perfect melding of the Hardie Boys come to life and an adventure that is impossible not to enjoy. Much of the film’s success lies in its un-tapping of what is essentially a longing in all of us young and old to discover tressure whether figuratively or metaphorically and the journey that our young “Goonies” take is the embodiment of this.
Lead by the wise beyond his years and future Sam from Lord of the Rings Sean Astin as Mikey the group consists of the teenager older brother Brand (a young Brolin), wisecracking Mouth (an on form Feldman), poor old fat kid Chunk (Cohen), Asian inventor extraordinaire Data (Temple of Doom’s Ke Quan) and female tagalongs Andy (Green) and Stef (Plimpton). This group presents one of the most fully formed and memorable gangs in cinema history a gang that can sit proudly along with the Breakfast Club, The Sandlot gang or any other iconic group of young adults. The gang’s journey is given heart thanks to the meaning behind there want of riches, the want to save their homes and there friendships from being torn down by greedy land developers. The team behind The Goonies literally struck gold with the casting in this picture with a young cast many a film would die for and who are strongly supported by one of the nastiest screen family’s your likely to see in the form of the Fratelli’s who lock up their own disfigured brother “Sloth” (played by former NFL participant John Matuszak) who becomes a star of the movie.
All the great casting in the world would not of made The Goonies such a classic if it were not for the playfulness the film finds in its traps and contraptions. The film is brimming to life with practical and special effects that hearken back to an almost teenage version of an Indiana Jones fable with skeletons, spikes, waterslides and pirate ships littering the scenery giving the film a sense of realism that would be lost today in a myriad of overused and unconvincing special effects. Those youngsters who will find themselves watching this film will be cast under its spell due to this much like I and hopefully you were at their age to.
For the child and explorer in all of us there is no better tale to partake in than The Goonies, a film that has charm to spare and rewards for re-watch after re-watch. Much like the titular gang who never say die hopefully the film will live on and on and continue to put a smile on the faces of all who take the wonderful journey.
See more from The Movie Guys on their website
TRAILER
DETAILS