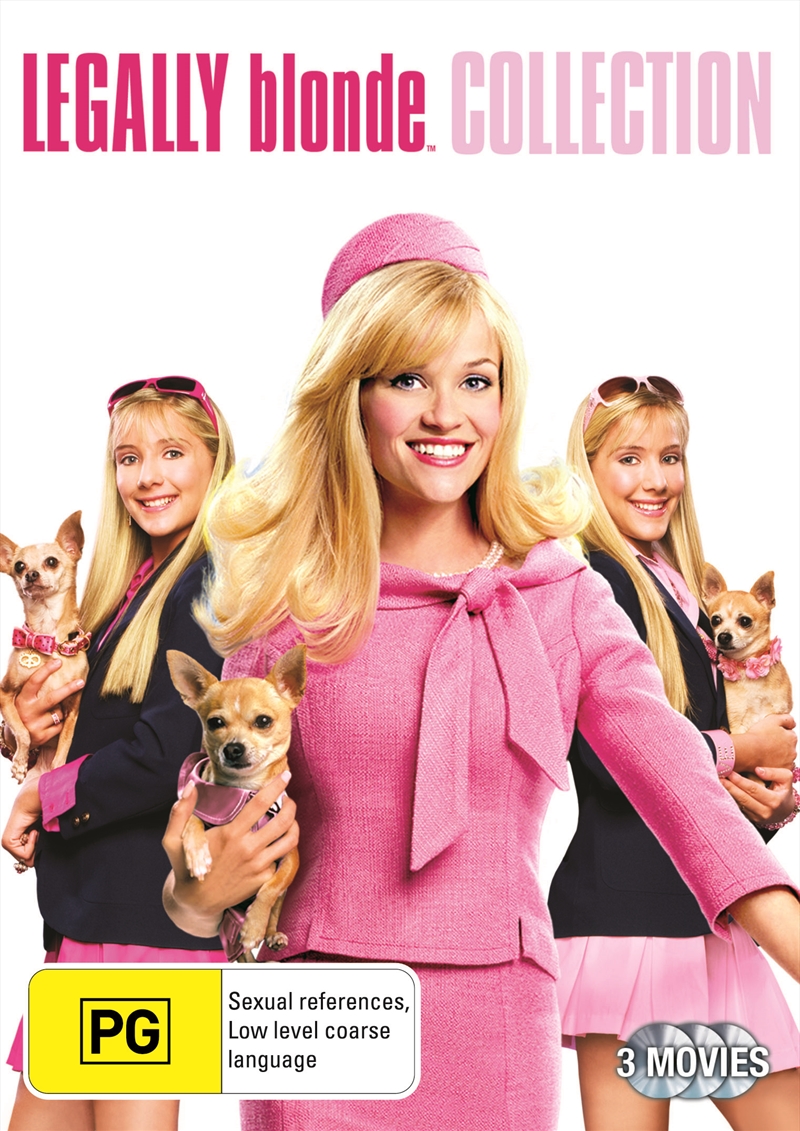 Legally Blonde
Elle Woods (Reese Witherspoon) has it all. She's the president of her sorority, a Hawaiian Tropic girl, Miss June in her campus calendar, and, above all, a natural blonde. She dates the cutest fraternity boy on campus and wants nothing more than to be Mrs. Warner Huntington III. But, there's just one thing stopping Warner (Matthew Davis) from popping the question: Elle is too blonde. Growing up across the street from Aaron Spelling might mean something in LA, but nothing to Warner's East-Coast blue blood family. So, when Warner packs up for Harvard Law and reunites with an old sweetheart from prep school, Elle rallies all her resources and gets into Harvard, determined to win him back. But law school is a far cry from the comforts of her poolside and the mall. Elle must wage the battle of her life, for her guy, for herself and for all the blondes who suffer endless indignities everyday.

Legally Blonde 2
Reese Witherspoon is back as Elle Woods in Legally Blonde 2: Red, White & Blonde. Now Elle is juggling a demanding career as a rising young lawyer as well as preparations for her wedding to the man of her dreams. But when she stands up for the rights of the other guy in her life - Bruiser, her chihuahua - Elle is fired from her job. She's devastated, but you can't keep an optimist down. Ms. Woods goes to Washington to take matters into her own well-manicured hands. Trying to learn the political ropes and win over self-serving politicians, Elle faces a formidable challenge. But with her clever and sassy signature blend of determination and intelligence, she bucks the system the Elle Woods way, inspiring those around her to find a voice of their own.

Legally Blonde 3
When Elle Woods young, blonde cousins Annie and Izzy (Milly and Becky Rosso) moved from England to California, they thought their pink clothes, small dogs and street smarts would make them instantly fit in and feel at home. However, they find they are miles away from the uniform fashions and money-focused power structure of their new prep school. When the schools reigning forces turn on the girls and try to frame them for a crime, Izzy and Annie must use their cleverness and charm to clear their names and show the school that in the classroom or the courtroom, they should never underestimate the power of blondes!