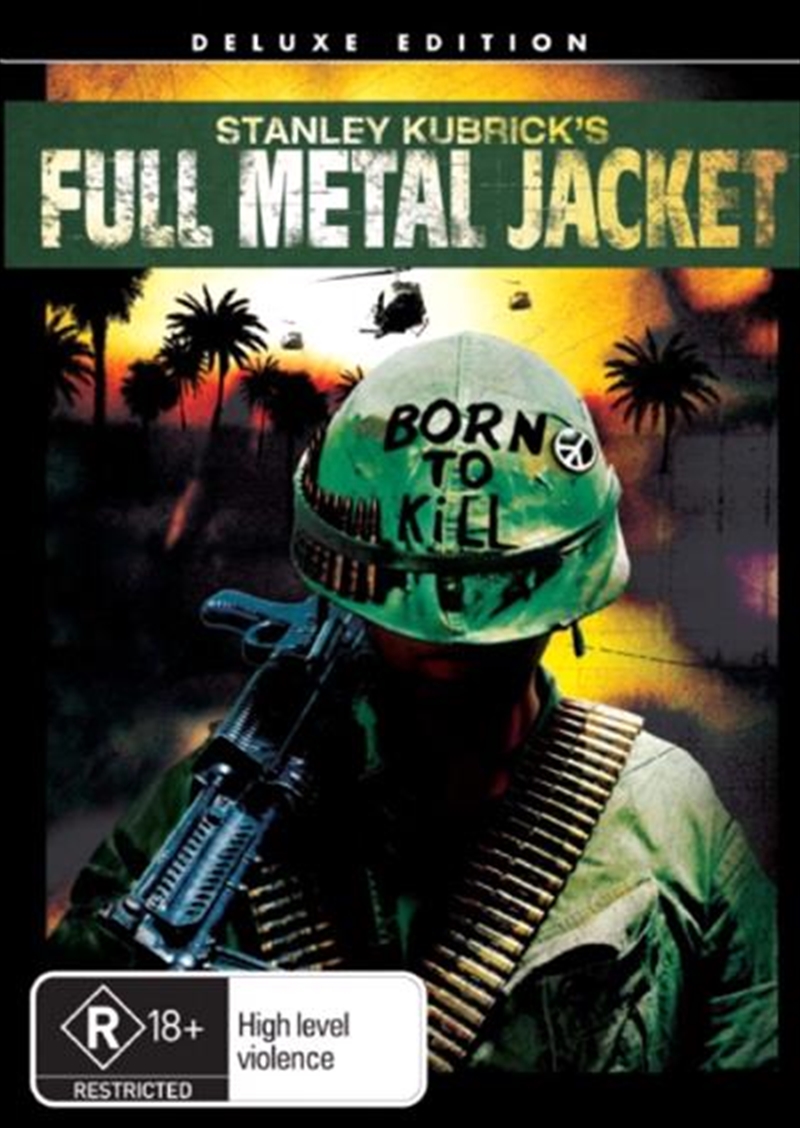 In Vietnam The Wind Doesn't Blow It Sucks

A superb ensemble cast falls in for action in Stanley Kubrick's brilliant saga about the Vietnam War and the dehumanising process that turns people into trained killers. Joker (Matthew Modine), Animal Mother (Adam Baldwin), Gomer (Vincent D'Onofrio), Eightball (Dorian Harewood), Cowboy (Arliss Howard) and more - all are plunged into a boot-camp hell pitbulled by a leatherlung D.I. (Lee Ermey) who views the would-be devil dogs as grunts, maggots or something less. The action is savage, the story unsparing, the dialogue spiked with scathing humour. Full Metal Jacket, from its rigours of basic training to its nightmare of combat in Hue City, scores a cinematic direct hit.

A new group of young men have just joined the U.S Marines Corp. We see each member getting their heads shaved, and then the film begins to give its viewers a more in-depth insight into the characters as each of these recruits begin their brutal boot camp training before them entering the battlefield. During the boot camp, the film introduces us to key characters, but at first glance, there are no obvious character introductions. Naturally, this is something that changes in due time. The boot camp training element of this film is a brutal watch as we witness the dehumanizing process of the group. Those who have seen this film before may state this film feels like two movies in one. The first half shows our leads being part of a brutal boot camp and the remainder of the film follows lead character into a war zone.
For those who are not aware, this film is based on the novel 'The Short-Timers' by Gustav Hasford and directed by Stanley Kubrick. The director delivers once again a movie, unlike anything I have ever seen before and brings a war film that is unforgettable to anyone who watches it.
The plot itself is unpredictable, and somehow this movie manages to surprise me every time I re-watch it. Each time I have hopes that specific character outcomes might change. Performances here are unique and surprising, particularly from actors Matthew Modine, Vincent D'Onofrio and Adam Baldwin who all play critical roles in this film. The major standout is the actor R. Lee Ermey who plays Sgt. Hartman at the boot camp.
Overall, if you have never seen this film, it comes highly recommended. As a war film, it is loaded with many dramatic moments and uncomfortable tension that can never be forgotten. Director Stanley Kubrick delivers an outstanding war film unlike anything I have ever seen. The film's visuals and soundtrack are perfection, the visuals are just as impressive. Performances are also a knockout, particularly from Vincent D'Onofrio and R. Lee Ermey. Like the film both actors provide something extremely unforgettable. This is a must-watch and easily falls into my list of top-rated movies of all time.
Peter has written this movie review for Sanity. See more from Peter here

Stanley Kubrick has asserted himself as one of Hollywood’s best directors. With his filmography including (but not limited to), ‘2001 A Space Odyssey’, ‘The Shining’, ‘Eyes Wide Shut’, ‘A Clockwork Orange’, ‘Doctor Strangelove and of course, 1987’s ‘Full Metal Jacket’. Kubrick brings the horrors of war to life, in this realistic portrayal of abuse within the army matched with the horrors that war can play on the psychie, causing PTSD. We have one of the 1980s most despicable villains in R. Lee Erney’s portrayal of Drill Sargent Hartman. ‘Full Metal Jacket’ tells the story of U.S. Marine Private Joker (played by Matthew Modine), as he observes the dehumanizing effect of the Vietnam War on his fellow recruits from their brutal boot camp training headed by Hartman to the violence in the streets of Hue. With a timely tale, a fantastic cast and Stanley Kubrick at the helm, it is easy to see why this remains one of the best war films of all time.
‘Full metal Jacket’, still manages to stand up remarkably well to this day, due to its themes of masculinity, repression, representation, waste and duality and the manner in which these films themes are displayed. Kubrick directs the hell out of this movie. The film is somehow more terrifying then most horror flicks released in the late 1980s. Kubrick has a way of moving the camera around his actors, certain scenes make you feel uncomfortable because of how long they are, the way they are executed and the wonderful performances that Kubrick manages to get from his actors as well. Modine is fantastic here as well, he is a great central character to tell this story through. His innocence helps the audience see the effects of War, because as an audience, we are witnessing what is going on behind the scenes, the same way as Private Joker is as well. He is really captivating here. As mentioned, R. Lee Ernery is fantastic here but so is Vincent D’Onofrio, stealing near every scene he is in. He is magnificent.
‘Full Metal jacket’ is up there with some of Kubrick’s best work. It is well shot, superbly acted, and well realised. This is a great film and one of my all-time favourite Kubrick films. I am giving ‘Full Metal Jacket’ a 9.5/10. Pick up your copy today on 4K UHD from your local Sanity or Online!
Chris has written this movie review for Sanity. See more from Chris here