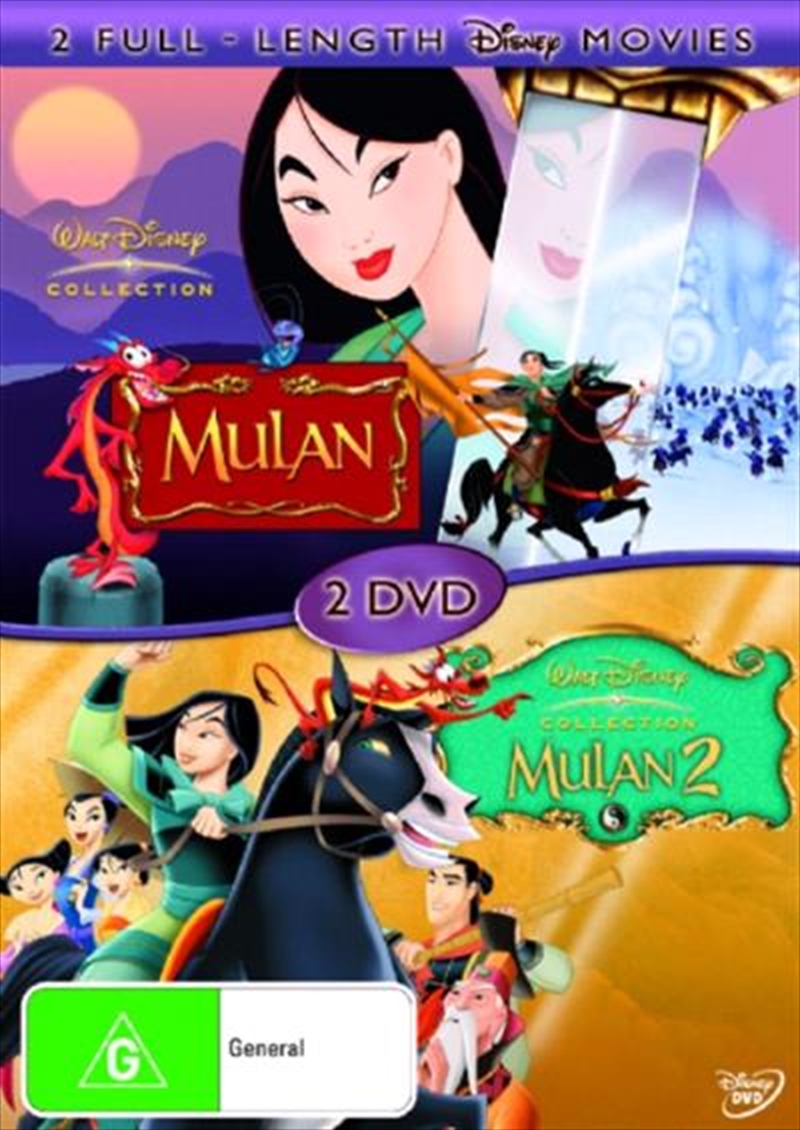 Shipping - See delivery options.
Postcode:
Quantity:
SEE MORE IN:
4 for $50 DVD, Blu-ray & More Mulan
DESCRIPTION
Contains:
1. MULAN: Based on an ancient Chinese poem, the legend of Mulan beautifully unfolds in Disney's 36th animated classic! Full of daring adventure, hilarious characters and inspiring music, this feature celebrates honour, courage and a young girl's quest to be true to her own heart. Beautiful and clever Mulan proves her worth outside of her tradition-bound society when, disguised as "Ping", she bravely takes her father's place in the Imperial Army. Helped by her outrageously funny guardian dragon Mushu and a lucky cricket named Cri-Kee, Mulan strives to earn the respect of her fellow warriors and their handsome Captain Shang. A climactic battle atop the Imperial Palace is where her family's honour and the fate of the Emperor and all of China rest in her hands!
2. MULAN II: The magnificent legend of Mulan continues in an all-new, full-length movie. The beautiful and courageous heroine is back - along with her hilarious guardian dragon Mushu and some great new friends - for more fun in the spectacular sequel to Disney's original classic. The spirited Mulan gets the thrill of her life when General Shang asks for her hand in marriage, but the surprises are just beginning. Throwing a wrench into their plans is the mischievous Mushu, who tries to keep the happy couple apart as long as possible in order to retain his job as her guardian dragon. Adding to their adventure is the fact that Mulan and Shang must escort three princesses across China to their own arranged marriages. When she discovers that these three women aren't looking forward to their upcoming weddings, Mulan makes a bold decision that will change the course of history. Experience the laughs and excitement of Mulan II - a new classic in the rich tradition of Disney animation - featuring irresistible new music, great comedy, and a heart-warming story of courage and friendship.
TRAILER
DETAILS