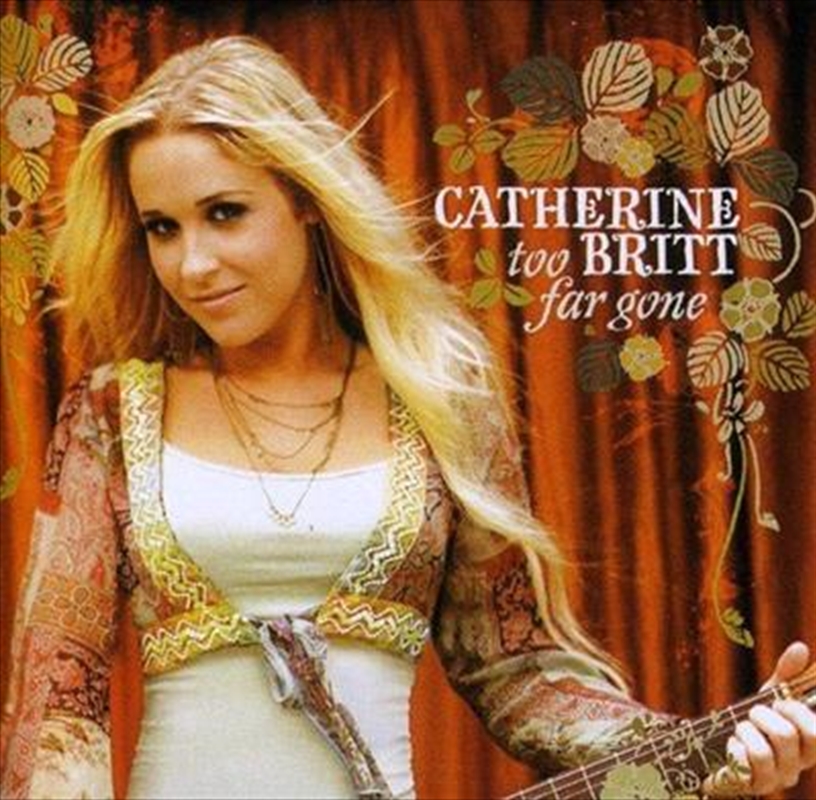 Shipping - See delivery options.
Postcode:
Quantity:
SEE MORE IN:
2 for $40 Music All 2 for $40 Catherine Britt
DESCRIPTION
While it made Catherine plenty of fans in her native home her debut album, Dusty Smiles And Heartbreak Cures had an even greater impact on her career when it came to the attention of a British pop superstar, then in the middle of an Australian tour.

“To be really honest with you, I’m obsessed with music,” Britt says with a disarming smile. “It’s my whole life. I listen to music, I read biographies, I read country music history. Most of the time, I just don’t pay much attention to the outside world. So I didn’t even know that Elton John was touring in Australia. But I was sitting at home one day when I got a call from my record label, and they ask, ‘have you been watching television lately?’ I said no, and they said, ‘well, Elton John’s been mentioning you on all these TV shows.’

“I just fell out of my chair. It was totally out of nowhere. I couldn’t comprehend it. It seems he had gone into a local CD shop somewhere in Australia, and the guy behind the desk recommended my album to him. So he bought it, and just fell in love with it, and he started mentioning me on the ‘Today’ show and in all these interviews: ‘There’s this new girl, Catherine Britt, I heard her album the other day and just flipped out.’ It was freaky, but you know, he’s an artist, and he’s a music fan. I think people can tell a passionate singer, one who cares about the music, and I guess that’s what he was attracted to.’”

At Sir Elton’s invitation, Britt came to Sydney for the superstar’s final show on the tour. The two met backstage and, Catherine remembers, “he asked me, ‘have you got any contacts in America?’ I told him I didn’t – ‘I want to pay my dues and go there one day, but no, I don’t know anybody’ – and he said, ‘I want to give you a hand.’ I thanked him, but I didn’t think much of it, because he must be the busiest man in the world. The next day we had three labels calling, all saying that they wanted to sign! A week or so later, Joe Galante flew us to Nashville. I could have died happy right then and there! It seemed like all my dreams came true in five days! I got to come to Nashville, I sang on the Grand Ole Opry, and I signed with RCA Records.”

With that, Catherine began traveling back and forth between Australia and Nashville, writing songs, listening to songs, meeting with potential producers, finding her way around the industry and soaking up the knowledge she’d need for a country music career in the United States. Despite her youth, she had some firm ideas about what she wanted, and she wasn’t afraid to express them.

“I’m stubborn,” she says with another laugh. “I remember the first time I walked into RCA Records, and Bill (Chambers) and I sat down with Joe Galante. We sang him some songs, and he said, ‘That’s all I need.” And I said, “I’m not here to be anything that I’m not. I want to be a country singer, and that’s my thing. I’m so glad to be here, and I feel so privileged, but it’s not worth changing myself to get a record deal.’ And the coolest thing was, Joe looked me in the eye, like he does, and he said, ‘We will never, ever change you. We want to sign you because of what we heard, and that’s your album. That’s you.’ And they never made me compromise anything. I’m really, really proud of that. We’ve worked together on everything, and my word has always been the last word.”

Almost two years later, with a fistful of songs she’d co-written with fellow newcomer Brice Long, veterans Paul Overstreet and Jerry Salley, and the legendary Guy Clark, Catherine was ready to begin recording her first album for RCA. In keeping with her vow to be a country singer, Keith Stegall (Alan Jackson, George Jones) was chosen as producer; in keeping with her determination to keep close to her personal roots, Bill Chambers was on hand to co-produce; and in keeping with her pure talent and captivating charm, Elton John, Kenny Chesney and Hank Williams’ legendary steel player Don Helms all made the time to join Britt in the studio.

The result is an album that stands as one of the most exciting major label debuts not just of the year, but of the new century. For Catherine Britt has accomplished the most essential job a country artist can hope to do: make music that is at once fresh and invigorating enough to speak to a new generation of fans, and yet naturally and firmly rooted in country tradition and the essential truths it has always brought to light. Such triumphs are rare – historians may turn to such breakthroughs as Jackson’s Here In The Real World, Ricky Skaggs’ Highways And Heartaches and Emmylou Harris’s Pieces Of The Sky as earlier instances – but when they come along, they can set the pace for years to come. Years from now, those same historians may well include Catherine Britt’s debut on the list
DETAILS

The Upside Of Being Down

A New Pair Of Shoes

Fallin' Out Of Love With You