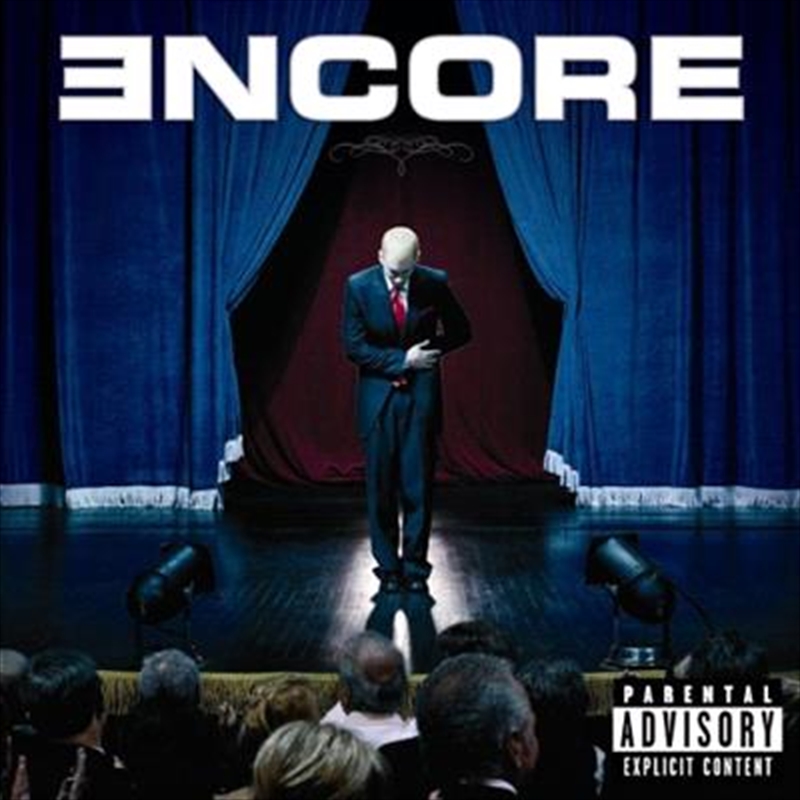 Shipping - See delivery options.
Postcode:
Quantity:
SEE MORE IN:
Eminem 2 for $25 Music
One of the most controversial rappers to ever grace the hip hop world is back! Using his biting wit and incredible skills to vent on everything from his unhappy childhood to his contempt for the mainstream media, Eminem returns with his fourth album 'Encore'.

The album opens with 'Evil Deeds', and followed by 'Never Enough' featuring 50 and Nate Dogg. Both tracks serve there purpose as signature Eminem tunes. After giving us the Slim Shady joker, Eminem gets down to business with 'Yellow Brick Road' which is all about the racist tapes that The Source magazine brought out earlier in the year when they printed the lyrics to a recording that he made as a teenager out of anger and frustration after a breaking up. Next is 'Like Toy Soldiers' where he spits about the Shady/Aftermath family, and their basic love for each other, all over a sample of 'Toy Soldiers by Martika.

Eminem has always come with a catchy, loopy, and offensive single and this time is no different. Taking shots at Michael Jackson, MC Hammer, and others, 'Just Lose It', does what it's suppose. Others like 'My First Single', 'Big Weenie', 'Rain Man', and 'Ass Like That' are similar to 'Just Lose It', and have the same Slim Shady devilish feel. Eminem also features his second diss towards President Bush on the slow tempo track 'Mosh'. The message is driven home with its hard marching stomping beat with dark undertones.

This wouldn't be a Mathers album if he didn't air his views about his love life too so there's two particular tracks on this topic - 'Spend Some Time' and 'Crazy In Love'. 'Spend Some Time' introduces the world officially to Stat Quo who makes his impact on the track with Obie Trice. Breaking away for a moment from his Slim Shady persona, Eminem drops into Marshall on the standout track 'Mockingbird' as he dedicates himself to Hailie once again.

The albums comes to a grand finale with Eminem spitting rhymes with his D12 crew on 'One Shot 2 Shot' followed by the perfectly titled track 'Encore' which sees him in full flow with Dr Dre and 50 Cent.