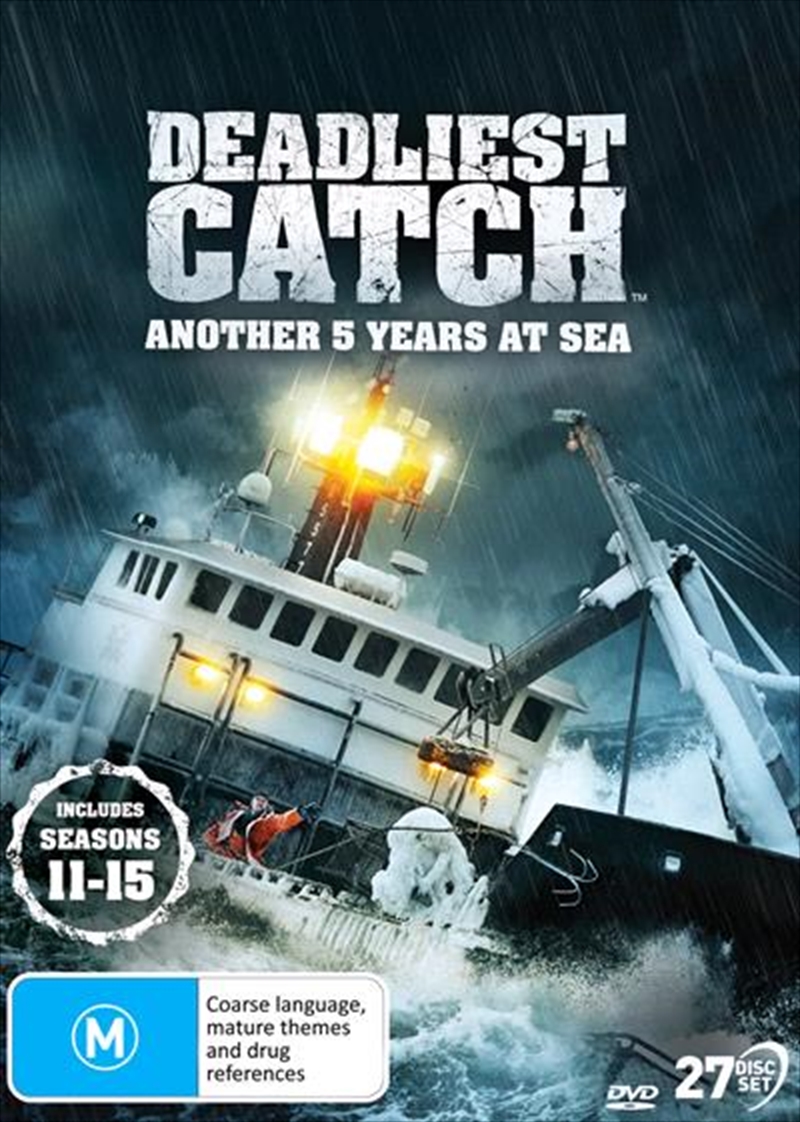 SEE MORE IN:
New Release DVD & Blu-ray New Release Television Deadliest Catch
DESCRIPTION
For the past fifteen years, the swash-buckling captains have carved their dangerous living in the Bering Sea, risking lives and limbs in the quest for their bounty. Sig Hansen of the Northwestern, 'Wild' Bill Wichrowski of the Summer Bay, Keith Colburn of The Wizard and Steve 'Harley' Davidson of The Southern Wind vie against the younger guns: Sean Dwyer of the Brenna A, Jake Anderson of The Saga and Casey Mcmanus and Josh Harris of the Cornelia Marie. This action-packed edition of Deadliest Catch 'Another 5 Years At Sea' features the entire series 11-15 as old faces are replaced by new and legendary rivalries continue in earnest. SEASON 11 - An additional 15 million dollars in crab sends the fleet into a frenzy. To get ahead, the Time Bandit and Wizard must put a decade old rivalry behind them. Josh Harris learns a difficult lesson. SEASON 12 - An adrenaline-packed season brings a new face: 23 year-old Sean Dwyer, fighting for the legacy of the father he lost too soon. The Time Bandit squares off with the law, Captain Keith's life spirals, and Sig torments his former protege. SEASON 13 - The crabs have vanished igniting a gruelling hunt to save the fleet's way of life. Captain Sig resumes the helm after a major heart attack. A rescue is attempted. Wild Bill debuts his own brand new boat in a crisis season. SEASON 14 - Sig and Jake have a big falling, leading to new strategies and alliances. Josh Harris returns to captain his fathers boat. Sean plays dirty, but Wild Bill shows him he's messing with the wrong Captain. SEASON 15 - On the cusp of king crab season, a massive new boat helmed by a renegade captain discovers the crab are all in one spot. As the fleet races to find the quarter billion-dollar hoard, captains battle each other and the Bering Sea to claim their share of the bounty.
DETAILS