Art Of Self Defense, The 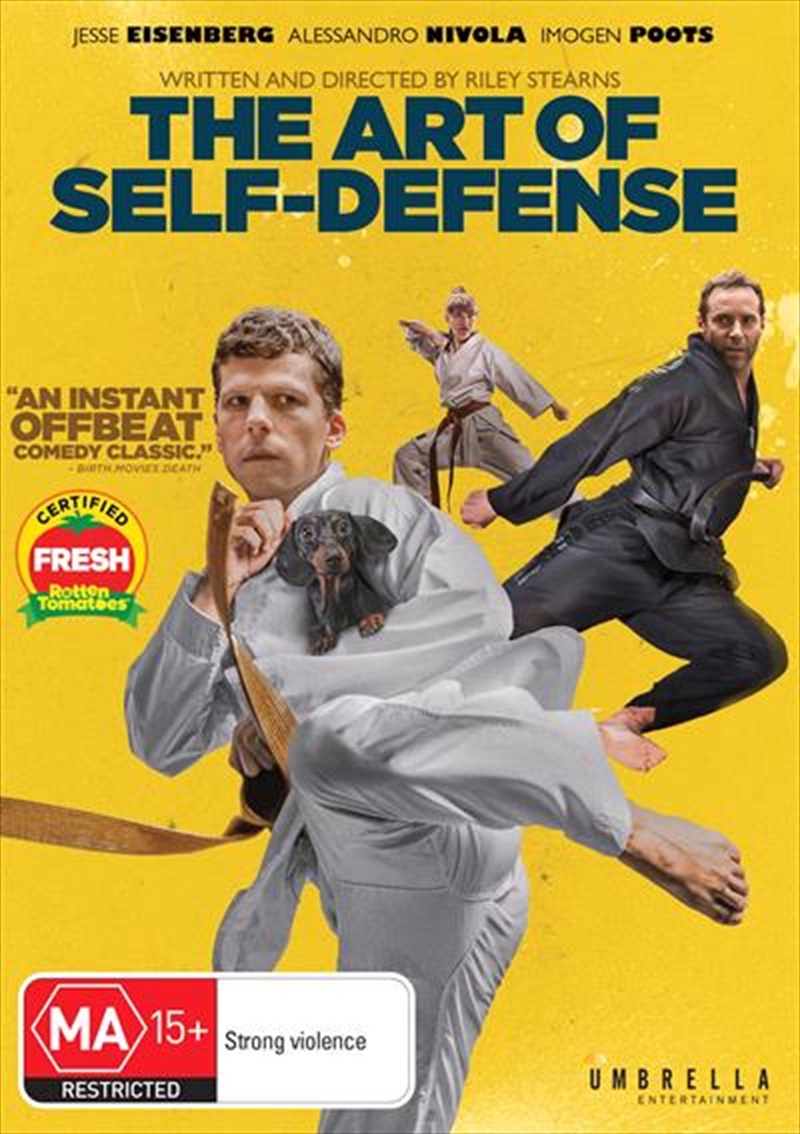 Art Of Self Defense, The

Casey (Jesse Eisenberg) just cant seem to win. Attacked on the street,humiliated at his job and even emasculated by his dog, he joins a localkarate dojo led by the enigmatic Sensei (Alessandro Nivola) to learn how to defend himself. In the midst of his training, Casey becomes friendly with a female instructor (Imogen Poots) and soon realizes he is caught in a bizarre world of outcasts, fraternal rituals and hilarious hyper-masculinity.

Review of The Art of Self-Defense by Christopher Pattison

Jesse Eisenberg has been channelling his indie roots for a couple of years now and it has produced some impressive results, with the likes of: ‘Resistance’, ‘Vivarium’ and now ‘The Art of Self-Defense’, where Eisenberg does team-up once again with his vivarium co-star Imogen Poots. ‘The Art of Self-Defense’ follows Casey (played by Jesse Eisenberg), who after being attacked on the street, enlists in a local dojo, led by a charismatic and mysterious sensei (played by Alessandro Nivola), in an effort to learn how to defend himself if another threat is to arrive. With a fun premise and Jesse Eisenberg in the lead, how was ‘The Art of Self-Defense'?
‘The Art of Self-Defense' was a fun and unique comedy film. Eissenberg delivers his trademark wit with a dash of cynicism and sarcasm as well that we have come to expect from the actor. The film's premise is unique, we have had films where an individual has taken crime into his own hands (‘Super’, ‘Defendor’ and ‘Kick-Ass’), but never a person who wants to learn how to defend himself against future threats in a comedic setting like this. Eissenberg has great chemistry with his co-star Imogen Poots. The two work really well together, with both performers really understanding the others' style of comedic acting and on-screen presence so they really do complement one another on-screen. Writer/director Riley Stearns has a knack for visual comedy. There are some great sequences here that are visually hilarious and do allow the actors as well, to show off their physical comedic acting chops as well. ‘The Art of Self-Defense', was a fun, hilarious and surprisingly sentimental comedy feature with likeable stars and a great sense of visual comedy.
‘The Art of Self-Defense' was a huge surprise for me, filled with outlandish humour, great visual gags and a very physical performance from Jesse Eisenberg. If you are a fan of comedy, then this one is for you. I am giving ‘The Art of Self-Defense' a 7.5/10. Pick up this hidden gem from your local Sanity on DVD today!
Chris has written this movie review for Sanity. See more from Chris here

Title: Art Of Self Defense, The