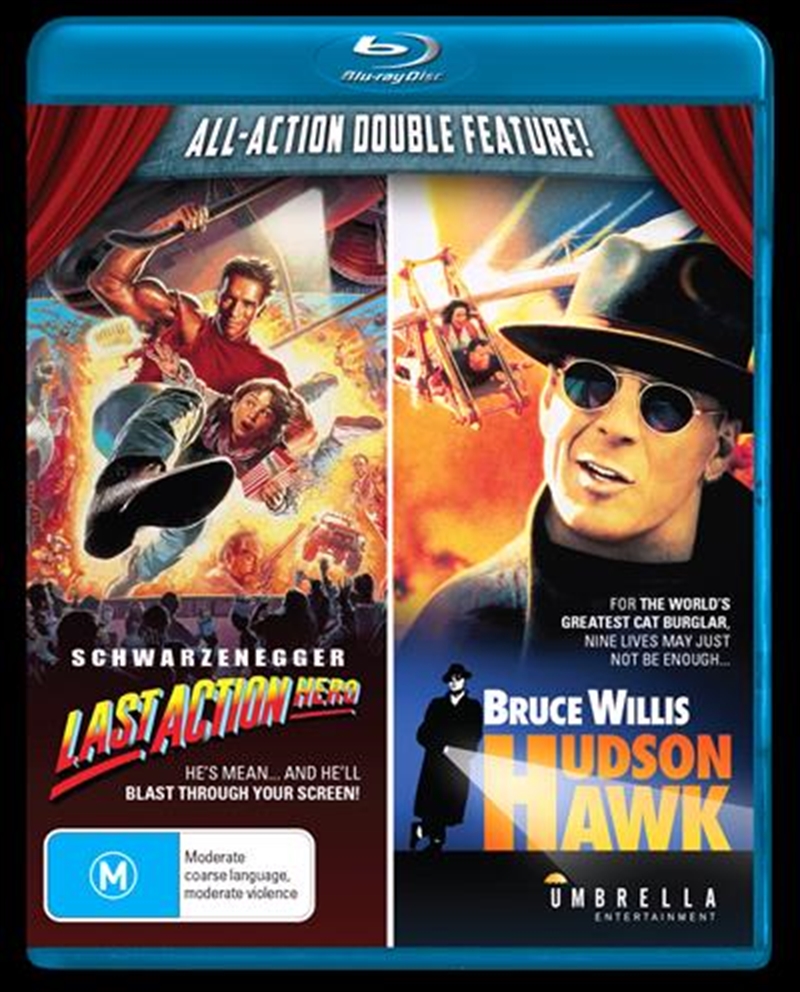 Shipping - See delivery options.
Postcode:
Quantity:
SEE MORE IN:
Bruce Willis Movie Collections
DESCRIPTION
LAST ACTION HERO: Young Danny Madigan (Austin O'Brien, The Lawnmower Man) is a big fan of larger-than-life action hero, Jack Slater (Arnold Schwarzenegger, The Expendables). When his best friend, Nick (Robert Prosky, Dead Man Walking), the projectionist, gives him a magic ticket to the new Jack Slater movie, Danny is transported into Slater's world, where the good guys always win. One of Slater's enemies, Benedict the hitman (Charles Dance, Patrick), gets hold of the ticket and ends up in Danny's world, where he realizes that if he can kill him, Slater will be no more. Slater and Danny must travel back and stop him.
HUDSON HAWK: Bruce Willis (Die Hard) is Eddie The Hawk Hawkins, the world's most famous cat burglar, who after 10 years in prison is ready to go straight. But it's not going to be easy for The Hawk. The mob and the CIA have conspired to blackmail Eddie and his partner, Tommy Five-Tone (Danny Aiello, Leon: The Professional), into stealing three DaVinci masterpieces from the most heavily-guarded museums in the world. Sounds simple, right? WRONG! While trying to steal the goods Hawk falls in love with a beautiful but schizophrenic nun (Andi McDowell, Four Weddings and a Funeral) and is relentlessly pursued by the greedy and powerful Minerva and Darwin Mayflower, who want the artworks as part of their twisted plot to ruin the world's economy. It's wall-to-wall action as the wise-cracking Hawk saves the world, wins the girl and gets the last laugh.
DETAILS