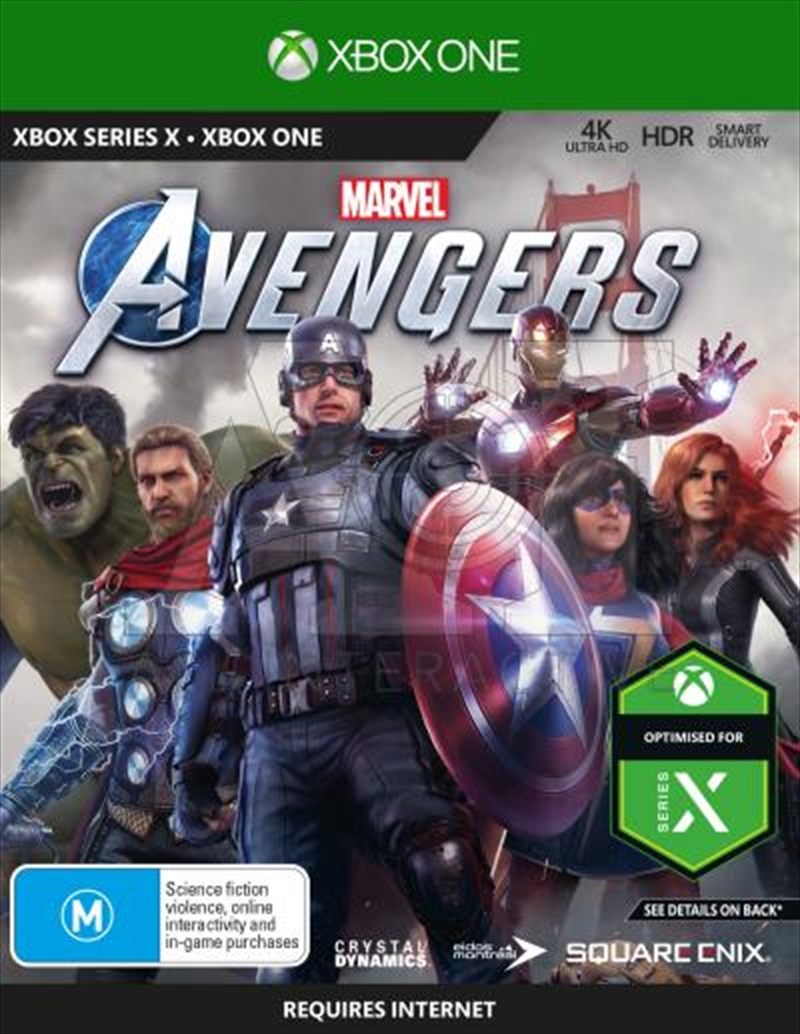 SEE MORE IN:
Everything Avengers All XBox
DESCRIPTION
Marvels Avengers

Marvel's Avengers is an epic, third-person, action-adventure game that combines an original, cinematic story with single-player and co-operative gameplay. Take the essential Super Hero gaming experience to another level! Marvel's Avengers will be available for next-gen consoles at no extra cost. This version will boast a wide spectrum of improvements to visuals and speed, and will be backwards compatible in single and multiplayer. Marvel's Avengers has a beautiful world filled with exquisite detail, and with improved Heroics, destruction, graphical fidelity, and framerate versus previous gen, you won't be missing any of it. Get right into the action with fast loading times and be blown away by the striking detail of enhanced destructive visuals that make Heroics feel truly in your hands. Marvel's Avengers will support save file transfer and cross-gen play so you can pick up right where you left off and continue fighting AIM with your favourite Super Hero squad. We're excited to herald in the next generation of consoles on Marvel's Avengers!

Upgrading from the disk version will require the next-gen version of the same console with a disk drive.


Marvel's Avengers invites players to live their Super Hero dreams. Outstanding storytelling and an ever-expanding universe come together in the definitive Avengers gaming experience. Master extraordinary abilities, customize a growing roster of Heroes, assemble into teams of up to four players, and defend the Earth from escalating threats.


Marvel's Avengers begins at A-Day, where Captain America, Iron Man, the Hulk, Black Widow, and Thor are unveiling a hi-tech Avengers Headquarters in San Francisco - including the reveal of their own helicarrier powered by an experimental energy source. The celebration turns deadly when a catastrophic accident results in massive devastation. Blamed for the tragedy, the Avengers disband. Five years later, with all Super Heroes outlawed and the world in peril, the only hope is to reassemble Earth's Mightiest Heroes.


Marvel's Avengers features a cinematic story, complete with the high-octane action that Crystal Dynamics is known for. Featuring regular content updates, the game will take players on an epic journey delivered over multiple years. This is what's next for the Avengers.

Marvel's Avengers is a unique take on these iconic Super Heroes, including Captain America, Iron Man, the Hulk, Black Widow, and Thor. This character-driven story celebrates authentic Marvel heroism and humanity in a cinematic campaign filled with single-player and co-op missions.

Unlock powerful skills and new gear to build your ideal version of Earth's Mightiest Heroes. When combined with original, fan-favorite, and classic outfits, there are nearly limitless ways to customize these iconic Heroes.

Up to four players can assemble online to defend the Earth from escalating threats. The narrative will be delivered over multiple years, with no random loot boxes or pay-to-win scenarios. Every new Super Hero and region will be delivered to players at no additional cost if you own the core game.