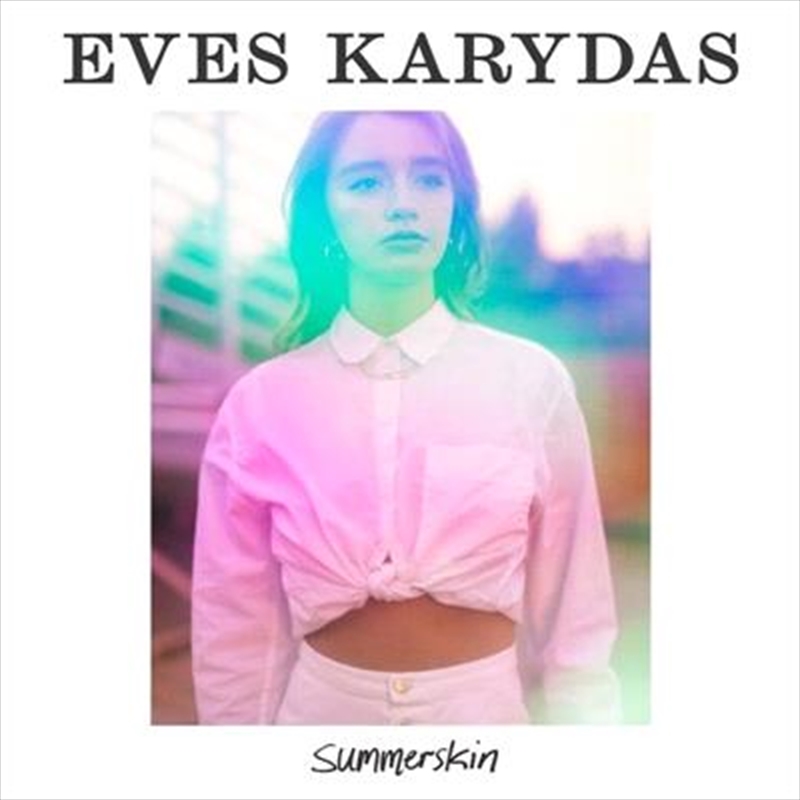 ‘summerskin’ is the debut album from indie pop star Eves Karydas. It features singles ‘Couch’, ‘Further Than The Planes Fly’ and ‘There For You’.

Since releasing her debut single in November 2017, Eves Karydas has had many triumphant moments in her career.

She supported British pop star Dua Lipa on her sold-out Australian tour, played at Splendour in The Grass, Spin Off Festival & The Great Escape (UK), and sold out her own national headline tour.

After what has seemed like a long journey, homegrown favourite Eves Karydas is finally releasing her glittery, synth-soaked debut album. ‘summerskin’ is everything you’ve ever wanted from the Brisbane based singer-songwriter. After returning to the music industry late last year with a slick new pop sound, she has been gaining major momentum on Triple J and streaming services with a new wave of fans discovering her cool vibes. And this album continues to explore and experiment the polished production sound compared to her old DIY influenced project. Album opener ‘Hush’ introduces pulsating and tribal influenced synths that will have you instantly bopping along to the catchy hook. But with the smooth pop hook of ‘Honest’ instantly getting stuck in your head you will quickly have a new favourite track. As she starts screaming “I’m just being honest” your hands will automatically be thrown in the air and you will begin to glide around the room interpretive dancing to the dreamy production. The middle half of the album delivers the singles you have become well and truly familiar with over the last couple of months with ‘Couch’, ‘Further Than The Planes Fly’, ‘Damn Loyal’ and the Lana Del Rey reminiscent ‘There For You’. The experimental ‘How Bound’ and ‘First Love’ seem a little out of place compared to rest of the polished stylings while ‘Balance’ may just be a strong contender for the next single. From the opening line “You broke my car, then you came back home and broke my heart” she will have you absolutely hooked. Closing the brief 10 track album with the cinematic ‘Wildest Ones’ she gives you this sweet and reflective moment which feels like the perfect soundtrack to her recent self discovery and ties together all the themes of love, heart break and self reflection that this album addresses. “We are going to be the wildest ones, you could possible dream of. It’s in the way you look at me”. It’s this gradual moment which just captives the raw lyrical emotion intertwined with her strong vocal capability. ‘summerskin’ is a very impressive debut album that introduces Eves Karydas to listeners as the artist she’s always wanted to be. It polished, fun, reflective and emotional whilst also including her experimental roots that long term fans will appreciate.
See more from Thomas on his website

4. Further Than The Planes Fly