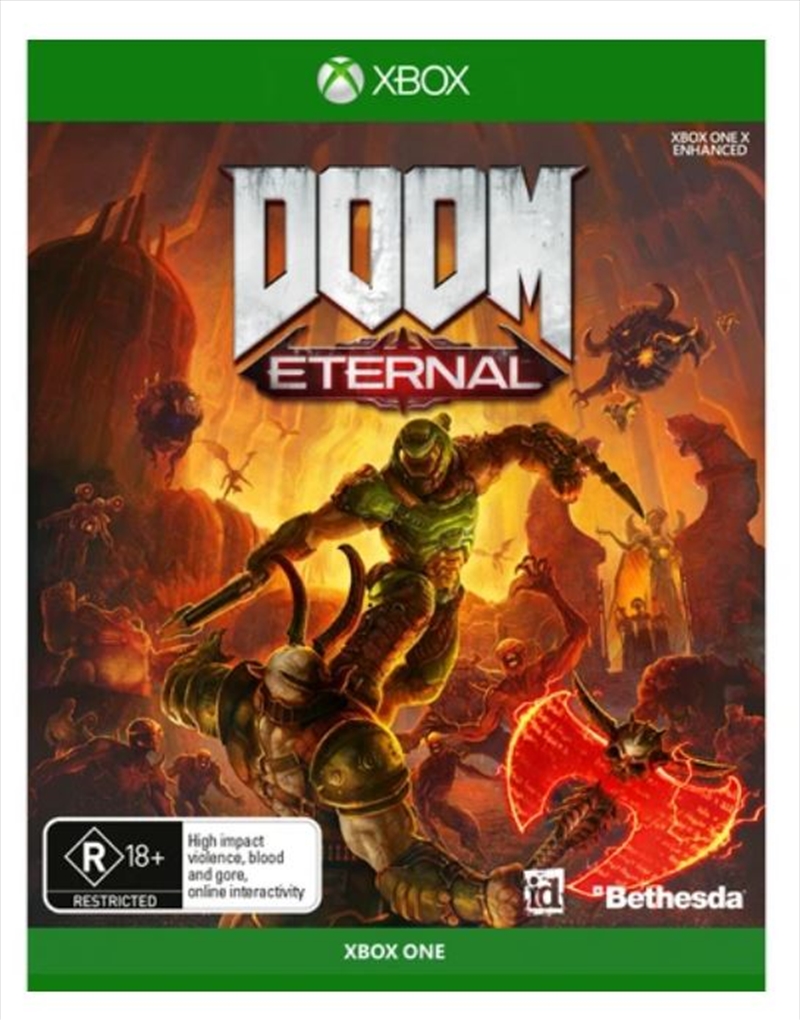 Developed by id Software, DOOM Eternal is the direct sequel to the award-winning and best-selling DOOM (2016). Experience the ultimate combination of speed and power as you rip-and-tear your way across dimensions with the next leap in push-forward, first-person combat. Powered by idTech 7 and set to an all-new pulse-pounding soundtrack composed by Mick Gordon, DOOM Eternal puts you in control of the unstoppable DOOM Slayer as you blow apart new and classic demons with powerful weapons in unbelievable and never-before-seen worlds.


As the DOOM Slayer, you return to find Earth has suffered a demonic invasion. Raze Hell and discover the Slayer's origins and his enduring mission to rip and tear... until it is done.

Slayer Threat Level at Maximum - Gain access to the latest demon-killing tech with the DOOM Slayer's advanced Praetor Suit, including a shoulder-mounted flamethrower and the retractable wrist-mounted DOOM Blade. Upgraded guns and mods, such as the Super Shotgun's new distance-closing Meat Hook attachment, and abilities like the Double Dash make you faster, stronger, and more versatile than ever.

Unholy Trinity - You can't kill demons when you're dead, and you can't stay alive without resources. Take what you need from your enemies: Glory kill for extra health, incinerate for armour, and chainsaw demons to stock up on ammo. These tools are the key to your survival and becoming the ultimate demon-slayer.

A New Class of (Destructible) Demon - Obliterate more demons than ever before, each with unique attacks and abilities. Fan-favourite classics such as the Pain Elemental, Archvile, and Arachnotron make their return, while a horde of totally-new demons joins the roster including the DOOM Hunter, Marauder, and the Gladiator. Rip apart your favourite demons to the core with DOOM Eternal's 'destructible demons' system and take your power fantasy to new levels.

Demonic Invasion Detected - As the Slayer, allow other players to invade your campaign as demons for a dramatic and unpredictable twist anytime you're playing the campaign. Or be a demon and invade other players' campaigns either by yourself or with someone else to give the Slayer a true taste of Hell.

Enter BATTLEMODE - BATTLEMODE is the new 2 versus 1 multiplayer experience built from the ground up at id Software. A fully-armed DOOM Slayer faces off against two player-controlled demons, duking it out over three rounds of intense first-person combat.