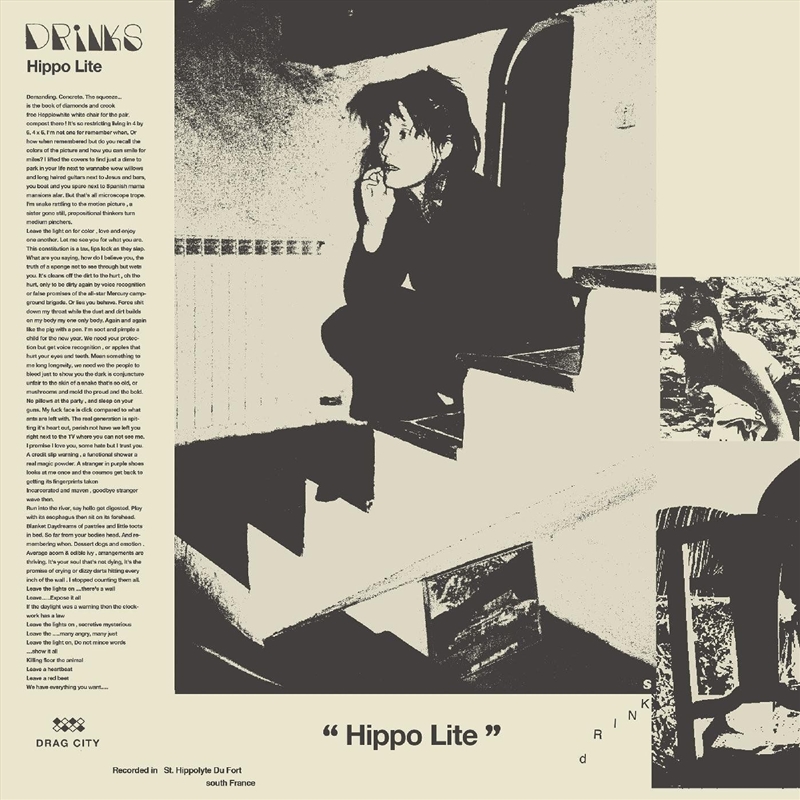 The first DRINKS album came about when fellow psychedelic travelers Cate Le Bon and Tim Presley bonded while touring and decided it made sense to record together. Hermits on Holiday was a weird and woolly record that was more experimental than psych, less song-based and more focused on sonic exploration.

After making the record, the duo stayed musically intertwined, with Le Bon producing Presley's 2016 album The WiNK and the two artists touring together again. It only made sense for them to go back to the DRINKS well for another go, since their tight musical connection allows them to push each other outside the fringes staked out on their respective solo works. When it came time to make Hippo Lite, the duo decamped to the South of France with only Le Bon's bassist Stephen Black on hand to help record their output.

The album finds the pair in the same mood and working in the same off-kilter prog-folk-psych vein. It's both more accomplished and looser than Hermits, with songs that show how intertwined their styles of playing and writing have become.

One of the joys to be found in their collaboration is how nice their vocals sound when they sing together; both the acid-folk-with-typewriters "Blue from the Dark" and "Greasing Up" illustrate just how well Presley's muffled croon and Le Bon's trilling soprano complement each other. The first record felt a bit like a first date; this one sounds like the work of a longstanding couple.

They weave together instrumental transmissions built around their strangled guitars, lengthy songs that twitch and twist excitedly ("Corner Shops," "Pink or Die"), rollicking art rock ("Leave the Lights On"), clattering experimental work ("Ducks"), and even an almost poppy tune ("Real Outside") along the way to crafting a challenging, confusing, complex, and confident second album.

Hippo Lite won't make anyone forget Le Bon's fine solo albums or Presley's many other guises, and it's definitely a side project, full of excess and stray bits, but it's never overindulgent or worse, boring. Like Hermits on Holiday, it's first-rate experimental rock made by two musicians with interesting, complicated ideas and the skills to bring them to life.

A1 Blue From The Dark

A4 When I Was Young

A5 In The Night Kitchen

B3 Leave The Lights On

B4 Pink Or Die

B5 You Could Be Better