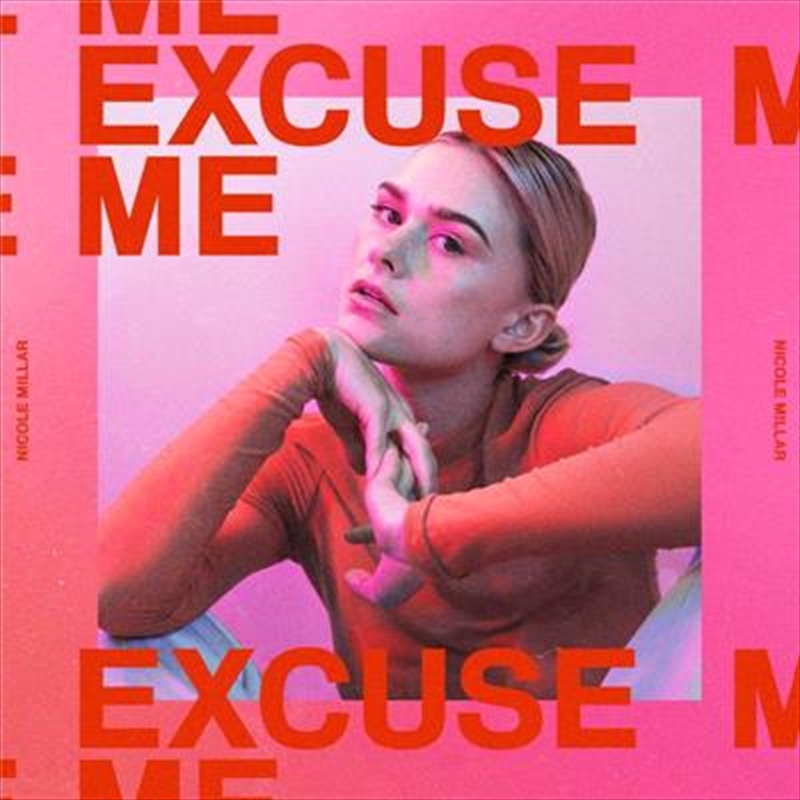 Nicole Millar is ready to introduce Excuse Me, her anticipated debut album.

It’s the product of two years of life, a whole lot of growth and a rollercoaster of emotions. Excuse Me charts everything from admitting your faults and owning your shit to wild nights with best friends and the bittersweet parts of love, lust and relationships.

Pop music with bite and electronic production collide on Excuse Me for songs that bleed glitter, guts and neon pink. Some of the tracks are tributes to getting rowdy with girlfriends or daydreams about wanting to be rich in New York, others are eyerolls at fake people, button-pushing boyfriends and ex-lovers. They’re all feisty, fun and made up of real, relatable feelings.

Nicole wrote on every song on the album, working with producers Sable, Dan Farber, Hoodboi, xSDTRK and Kyle Shearer to bring her words to life in studios between Sydney, Stockholm and L.A. Every song is a piece of her history, the work of a woman who’s found her sound and is sure of herself. For Nicole, the vision was to create music that’s “pop, but not”.

The album features Nicole’s hit singles ‘Signals’ and ‘Blindfolded’ as well as her new 80s-inspired release ‘Gimme A Break’, an anthem-in-wait for women who want to go their own way and won’t be tied down.

Review of Nicole Millar - Excuse Me by Thomas Bleach

Nicole Millar’s debut album has been a long time coming but it’s finally here in all it’s eclectic glory. The Sydney songstress delivers big pop moments mixed in with experimental electronic layering and indie-pop vibes. It’s a bit all over the place sonically but it works well because she is quite versatile as an artist. The album perfectly opens with the tropical banger ‘Signals’ which will have you ready to dance instantly and introduces her vulnerable songwriting which shades really well with the upbeat and positive pop ready production. But she quickly changes it up with the indie-pop ‘All My Issues’ that will quickly become your favourite track from this collection. It’s relatable, catchy and has a really good production that elevates this song to a new level. ‘No Strings’, ‘Gimme A Break’ and ‘Blindfolded’ are the big pop moments that you are already well acquainted with while new track ‘Buttons’ is single ready with it’s catchy hook and sassy vibe. ‘Money’ is catchy and playful while ‘Real Connection’ is seductive and groovy whilst being one of the more “low key’ tracks on the record. She falls into forgettable territory briefly with ‘Pink Sundae’, ‘Sign Me Up’ and Dot’ whilst the rest of the album is a little hit and miss. I was waiting for a stripped down vulnerable moment but it never came and I wish we got to hear that because her emotional tracks is where she truly shines. But this record introduces her perfectly to listeners and gives an all rounded taste to her eclectic pop sound.
See more from Thomas on his website
DETAILS