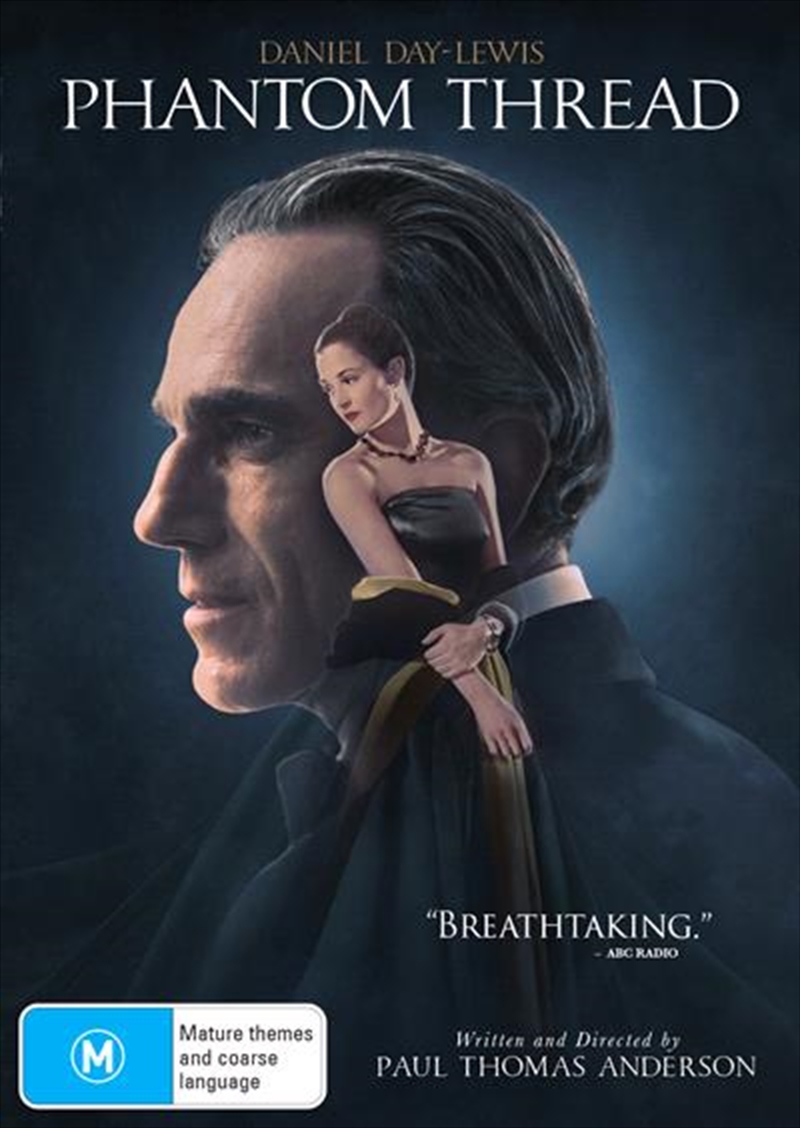 Set in the glamour of 1950s post-war London, renowned dressmaker Reynolds Woodcock (Daniel Day-Lewis) and his sister Cyril (Lesley Manville) are at the centre of British fashion, dressing royalty, movie stars, heiresses, socialites, debutantes and dames with the distinct style of The House of Woodcock. Women come and go through Woodcocks life, providing the confirmed bachelor with inspiration and companionship, until he comes across a young, strong-willed woman, Alma (Vicky Krieps), who soon becomes a fixture in his life as his muse and lover. Once controlled and planned, he finds his carefully tailored life disrupted by love

Review of Phantom Thread by Eddie @ The Movie Guys

As is to be expected from the man that has given us some of the great gems of modern cinema, Phantom Thread is another immaculately crafted piece of cinema designed by the original and unpredictable Paul Thomas Anderson and while it may not be the famed director’s best work, it’s one of the more unpredictable and near unclassifiable experiences of the 2017 awards crop.
Curiously only the second film Anderson has been Oscar nominated for his work as a director, Thread is the filmmaker at his most refined and low-key as he takes over the reigns of the films sole DOP and writing duties to set-up an intimate and slowly paced study of Day-Lewis’s particular and prickly post-war dress maker Reynolds Woodcock and his relationship with his sister Cyril played by Lesley Manville and his budding romance/artistic relationship with Vicky Krieps somewhat mysterious, yet beguiling Alma.
It’s an on the surface slight story and one that hardly seems ripe for a cinematic treatment but as is the case with the Anderson we’ve come to know and love, nothing within Thread is exactly as it may first seem and despite Thread’s rather solemn nature as an often bizarre darkly comedic like experience, that flirts the line between unnerving drama and expose of the artistic process, you’re never entirely sure of where Anderson may be taking us on his beautifully captured and expertly scored journey.
At the heart of Anderson’s odd tale is yet another award’s worthy turn from Day-Lewis in what is reportedly said to be his last ever film and if that is indeed the case, Woodcock offers the legendary screen-actor a fitting swansong.
Much like Anderson’s more dialled back direction, Woodcock offers Day-Lewis a less showy and more stoic character to inhabit than we are used to seeing from the man that gave us turns such as Bill “The Butcher” Cutting and Daniel Plainview but Day-Lewis’s impact on the film is still undeniable.
Woodcock is a complex and often totally unlikeable creation but Day-Lewis makes him a figure we can’t turn away from, as his artistic process becomes more apparent and his socially awkward intricacies start to rear their ugly heads, in particular in their relationship to Alma’s arrival as Woodcock’s new lover.
In what is likely to be a career defining role for the actress, Krieps is Day-Lewis’s equal in Thread and in some ways steals the show from Day-Lewis’s creation as Alma begins to reveal her nature and desires to the audience and with the two actors, we end up having one of the most bizarre, memorable and untypical romances committed to cinema in some time.
Final Say –
Not as instantly ground-breaking or recommendable as Anderson’s best works, Phantom Thread is still a highly original and meticulously constructed feature from the great American director and with the brilliant work by its two main leads; this multilayered experience is a deservedly praised film that’s likely to find a very passionate, albeit modest following.
See more from The Movie Guys on their website