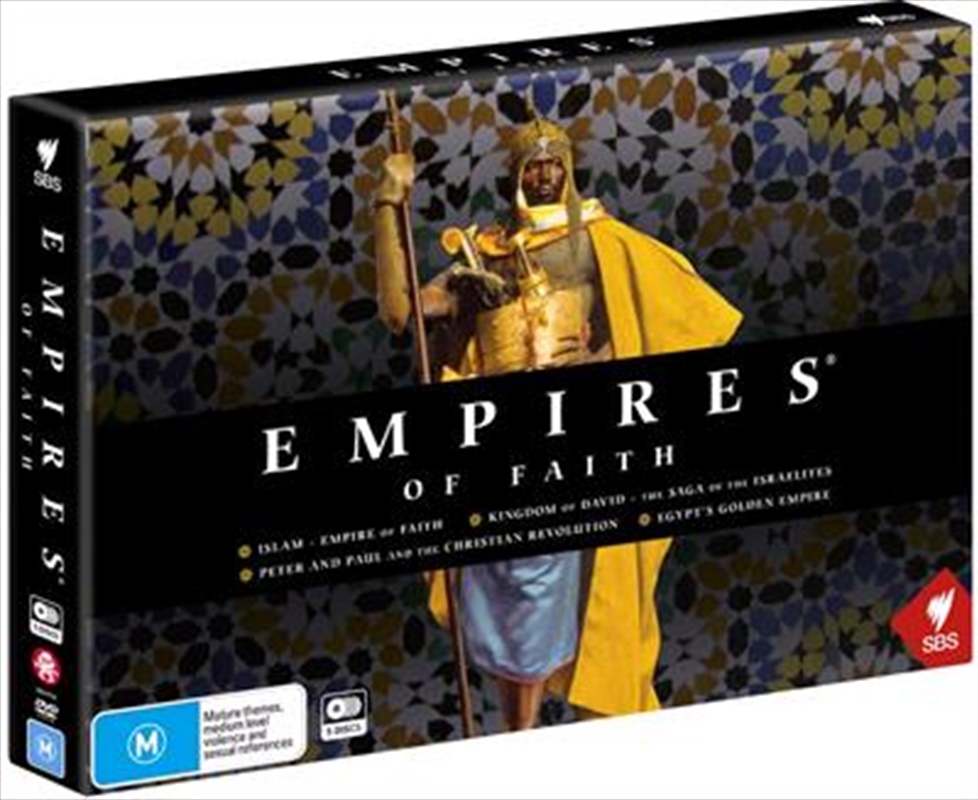 Shipping - See delivery options.
Postcode:
Quantity:
SEE MORE IN:
Bingeworthy Boxsets Movie Collections
ISLAM - EMPIRE OF FAITH Islam - Empire of Faith tells the spectacular story of the great sweep of Islamic power and faith during its first 1000 years. It is the epic story of a cultural empire that dominated a millennium, encompassed half the world, and shaped history. Between the fall of Rome and the European voyages of discovery, no event was more significant than the rise of Islam. Within the span of a few centuries, the Islamic empires blossomed, projecting their power from Africa to the East Indies and from Spain to India. Inspired by the words of the Prophet Muhammad and led by Caliphs and Sultans, this political and religious expansion has not been equalled in speed, geographic size and endurance before or since. Episode 1 - The Messenger Episode 2 The Awakening Episode 3 The Ottomans
KINGDOM OF DAVID - THE SAGA OF THE ISRAELITES The Kingdom of David: The Saga of the Israelites is the story of the creation of the world's first and most profoundly influential, monotheistic religion - a religion that dared to redefine humanity's relationship with God. Episode 1 - By the Rivers of Babylon Episode 2 - The Book and the Sword Episode 3 - The End of Days Episode 4 - The Gifts of the Jews
PETER AND PAUL AND THE CHRISTIAN REVOLUTION Two thousand years ago, in the Roman province of Judea, Jesus was crucified by imperial troops. Thousands before him had suffered the same fate. But unlike his predecessors on the cross, Jesus did not disappear from history. Instead, his memory was kept alive by a small band of Jews men and women who held fast to their conviction that Jesus was the Messiah. These early Christians faced powerful obstacles. The might of the Roman Empire and the dangerous politics of ancient Jerusalem lay a heavy burden on those who believed in Jesus. But the new faith would not die. In a brief span of time, this new religion would transcend its origins in the provinces of Rome and absorb the capital of the Empire itself. With the words of Paul and other ancient writers, interviews with contemporary scholars, and dramatic re-enactments, Peter & Paul and the Christian Revolution explores how two men weathered crippling disagreements and political persecution to lead one of historys most astonishing religious movements. Episode 1: - The Rock and the River Episode 2 -: The Empire and the Kingdom
EGYPT'S GOLDEN EMPIRE Egypts Golden Empire presents the most extraordinary period in Egyptian history: from 1570 BC to 970 BC, when the Egyptian Empire reached its zenith. In 1570 BC, when Rome was still a marsh and the Acropolis was an empty rock, Egypt was already 1,000 years old. Although the period of the pyramid-builders was long over, Egypt lay on the threshold of its greatest age. The New Kingdom would be an empire forged by conquest, maintained by intimidation and diplomacy, and remembered long after its demise. Egypts Golden Empire reveals with startling clarity the hopes and dreams of the Pharaohs and ordinary citizens who created the first great empire in history. Episode 1 Warrior Pharaohs Episode 2 Pharaohs of the Sun Episode 3 The Last Great Pharaoh