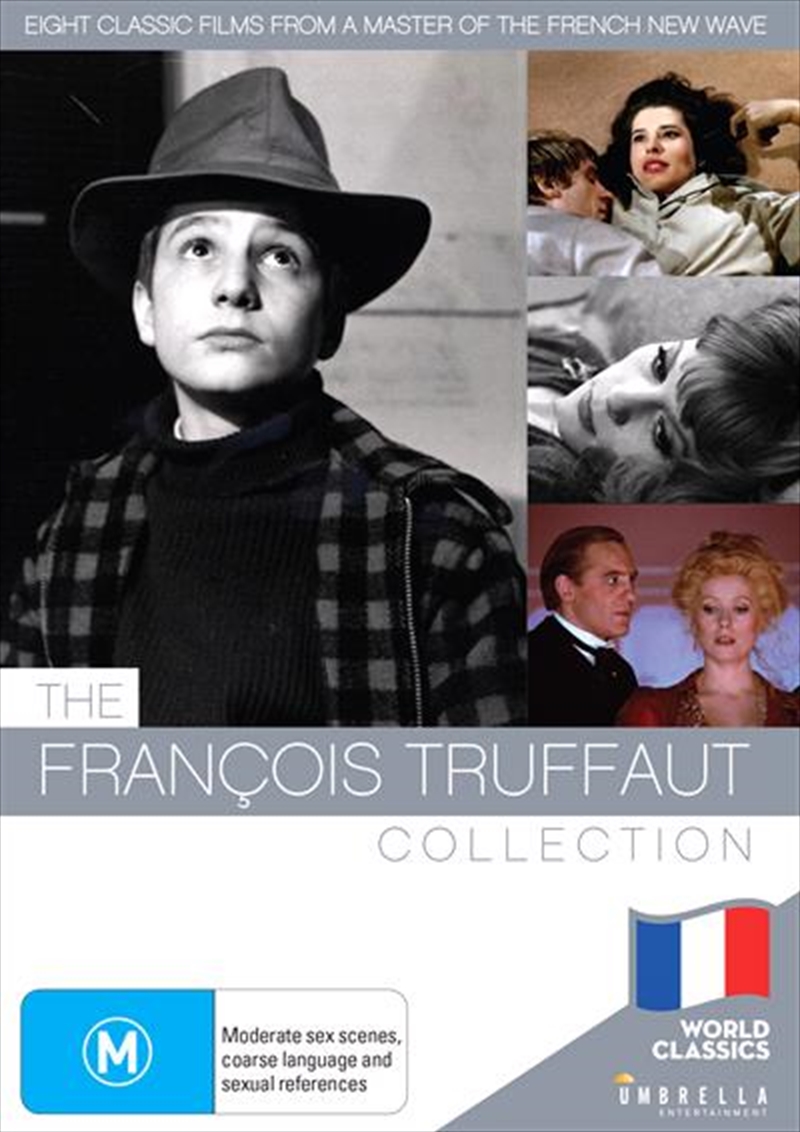 Want to click and collect? Check store availability
DESCRIPTION
Trailblazing French auteur Francois Truffaut was at the forefront of the Nouvelle Vogue in the 1960s and paved the way for some of cinema's most important and influential directors. His contribution to movie making is considerable and celebrated in this outstanding collection of films: The Last Metro (1980) - During the Nazi occupation of France, Marion Steiner, star and owner of a small theatre, stages a new play in an attempt to keep the theatre and Lucas, her Jewish husband, alive. The atmosphere becomes charged with fear when an anti-Semitic journalist settles into the stalls.
Finally Sunday! (AKA Confidentially Yours) (1983) - The cautious tale of a wealthy real estate agent (Jean- Louis Trintignant) wanted for the murder of his wife's lover. But his secretary refuses to condemn him and sets out to investigate the case herself.
A Gorgeous Girl Like Me (1972) - Manipulative murderess Camille Bliss (Bernadette Lafont) holds a mysterious charm over her unwitting male victims. When Camille is visited in prison by a naive criminology student (Andre Dussollier - Lemming) he soon emerges as her next tale to be told.
The Soft Skin (1964) - Famous scholar Pierre Lachenay (Jean Desailly) becomes infatuated with an airline stewardess during a lecture tour and hopelessly pursues the doomed affair into a maze of lust and deceit.
Two English Girls (1971) - Claude (Jean-Pierre Leaud), a young Frenchman is persuaded by his friend Anne, an outgoing British artist, to join her on a trip to Wales to meet her sister Muriel. So begins a complex and destructive romantic manage-a-trois as the permissive Claude falls for both sisters.
The Woman Next Door (1981) - Bernard Coudray (Gerard Depardieu) is an unassuming father in a loving marriage, but his life is thrown into turmoil when a former lover, Mathilde Bauchard (Fanny Ardant), unwittingly rents a neighbouring house with her husband.
The 400 Blows (1959) - Ignored and neglected by his parents, twelve-year-old Antoine Doinel (Jean-Piere Laud) is considered a troublemaker at school, with luck seemingly never on his side, it is Antoine who ends up getting the blame for bad behaviour. Finding refuge only in his love of cinema, Antoine soon finds it necessary to break free, and discover what the world can offer outside of the confines of his everyday life.
Jules and Jim (1962) - The tale of two young students, Jules (Oskar Werner), an Austrian, and Jim (Henri Serre), a Frenchman, in love with the beautiful, capricious, Catherine (Jeanne Moreau). Catherine switches her allegiance quixotically from one to the other - and occasionally to other men too. Yet neither Jules nor Jim can free himself from her powerful spell.
DETAILS